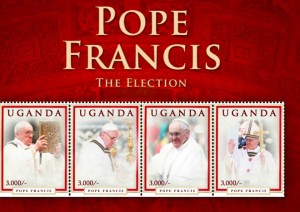 A report on a website, Catholicsnetwork.com, announces that Uganda is to issue 5 stamps to commemorate the recent election of Pope Francis to The Holy See (it's amazing where you can find information about new stamp issues). The illustration on the site (above) seems to show part of a miniature sheet of 4 x 3000/- stamps with depictions of different portraits of the new pope on them. Presumably the 5th value comes in the form of an additional single-stamp miniature sheet. The report states that the Ugandan Post Office has worked with its agents in New York to produce this commemorative issue and that it is part of Uganda's stamp programme for 2013 which will also contain an issue to mark the 10th anniversary of the Beatification of Mother Theresa.
These snippets of information are interesting since they indicate that the large stamp agency based in New York which for many years produced numerous stamps with Uganda's name printed on them is still on the scene as regards Ugandan new issues despite the Lithuania-based agency, Stamperija, having produced a large number of stamps for the country in the past 12 months or so. This suggests that the Ugandan Post Office has contracts with at least 2 over-producing agencies so we may continue to expect large numbers of stamps to appear which have been issued on behalf of Uganda in the foreseeable future.
In Blog 243, I emphasised that Solomon Islands officials and politicians must have been fully aware of the huge numbers of stamps produced by Stamperija on their behalf because they had registered all such stamps with the WADP stamp numbering system and I note that the same is also true of the Ugandan Post Office because all the issues of both the New York agency and Stamperija produced in the name of Uganda during 2012 are registered on the WADP site.
I imagine the Uganda papal issue will be part of an omnibus issue of stamps produced by the New York agency which will have the names of many of its client territories printed on them so whether or not Uganda will be the first Commonwealth country to commemorate the new pope or whether it will be one of the other client territories remains to be seen.