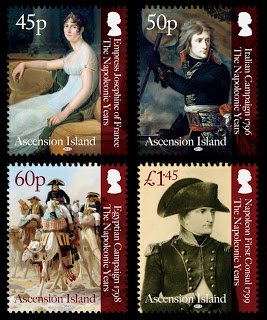 Ascension will issue a set of 4 stamps on 21 May 2013 as the first part of a series which will commemorate the bicentenary of British settlement of the island. The British occupation took place after the defeat of the French tyrant, Bonaparte, at the Battle of Waterloo and his subsequent exile to St. Helena. Ascension was garrisoned as part of the chain of defences set up to ensure the dictator was not helped to escape from St. Helena - he had caused so much death and destruction across Europe as well as global warfare, just as Hitler was to do 125 years later, that the British needed to take whatever measures they could to ensure that the monster was not let loose again. It is fitting therefore that the first issue of stamps to commemorate the British settlement of Ascension is dedicated to the subject of the creature which made it all necessary - Bonaparte himself.
These four stamps depict subjects related to the megalomaniac's rise to power:- the 45p shows his wife, Josephine, whom he was to divorce when it became clear that she could not provide him with children (how like England's very own monster, Henry VIII); the 50p shows Bonaparte at the time of his invasion of Italy in 1796; the 60p depicts a scene from his invasion of Egypt in 1798 and the £1.45p depicts him in the role of First Consul of France which he fulfilled from December 1799 to 18 May 1804 when he proclaimed himself to be "Emperor Of France".
Britain had by then been at war with France, with intermittent brief truces, for more than 10 years and it was to be another 10 years before the world saw the back of the tyrant with his military defeat and exile. War was fought across the world, European countries crushed by Bonaparte and Britain, just as in 1940, had its moments when it was forced to stand alone against the monster and his allies. St. Helena, the Atlantic island of his eventual exile, has issued numerous stamps over the years on various subjects related to Bonaparte. One of the earliest and finest was that issued on 5 May 1971 which commemorated the 150th anniversary of Bonaparte's death and which depicts Bonaparte in exile on St. Helena, defeated but still staring out arrogantly from the picture. 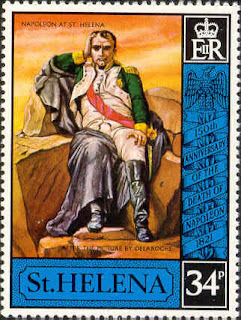 The road to defeat at Waterloo has been mapped out by issues from other Commonwealth countries - the coronation of Josephine as Empress Of France by the megalomaniac himself (he had forced Pope Pius VII to attend his coronation as an onlooker and later, when The Pope opposed his ambitions, he arrested and imprisoned the pontiff until his own first defeat in 1814) was depicted on a stamp from Cameroun which was issued in 1969. Pipe Pius is shown at the right side of the picture, seated immediately behind his tormentor. The painting was by Jacques-Louis David:- 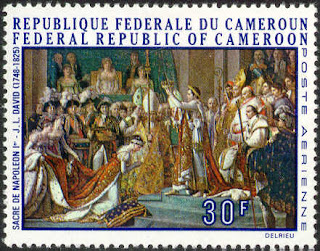 On 16 January 2007, St. Helena issued a stamp which depicted Bonaparte in imperial garb, again staring out of the picture with an expression of complete arrogance. The stamp was one of a set of three plus a miniature sheet containing all 3 values, titled "The Napoleons", the others showing the French rulers, Napoleon II and Naploleon III and excellently designed by Gyula Vasarhelyi and lithographed by BDT International:- 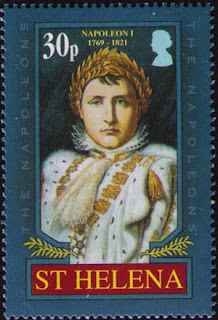 Great Britain's chances of surviving Bonaparte's desire to rule the world, were hugely increased by the defeat of the French fleet and that of their Spanish allies at the Battle of Trafalgar in 1805. St. Helena issued 2 sets of stamps to commemorate the bicentenary of this nation-saving victory on 10 May 2005 (a set of 6 stamps and 1 miniature sheet) and 21 October 2005 3 stamps, two values of which are depicted below).

On 1 November 1980, St. Helena commemorated The Duke Of Wellington, who led the British forces at the Battle of Waterloo in 1815 where they, with their Prussian allies, finally brought Bonaparte's career to an end. The set of 2 stamps commemorated the 175th anniversary of the Duke's own visit to St. Helena and the 30p value depicted a portrait of "The Iron Duke":- 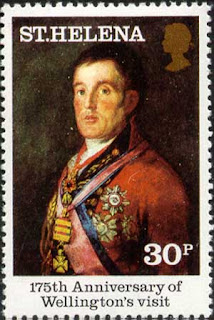 The new Ascension set begins what promises to be an excellent philatelic account not just of the establishment of a small isolated British colony but also of the rise and downfall of a monster. As we approach the bicentenary year in 2015, we will doubtless see increasing numbers of stamp issues on this subject.