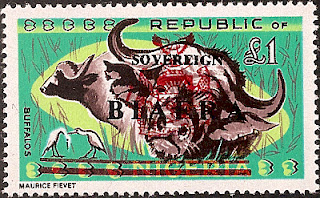 There is a country which makes a fleeting appearance in Stanley Gibbons Stamp Catalogue in the years 1968 and 1969 which, when it existed as a de facto independent state, became infamous across the world as a place of the most awful human suffering where many innocents starved and died as the result of warfare. On 30 May 1967, the Eastern Region of Nigeria declared itself to be the independent Republic Of Biafra. The central Nigerian government opposed this secession and on July 1967 began military operations against the rebel regime. For postal purposes, the breakaway state first used Nigerian stamps on its mail but by July 1967 stocks of these were exhausted and the use of rectangular "paid" handstamps was introduced. These handstamps bore the inscription "BIAFRA POSTAGE PAID' in 2 lines and were cancelled by ordinary datestamps. During the early part of the civil war between Nigerian government forces and the Biafrans, postage due labels and stationery cut-outs were also used on Biafran mail alongside Nigerian stamps.
A the end of 1967, a supply of contemporary Nigerian definitives (the set first issued in 1965) became available and these were overprinted in red or black or both with the inscription "SOVEREIGN BIAFRA" and the name of Nigeria crossed out by 2 horizontal lines along with the Biafran coat of arms. Overprinting was carried out by The Government Printer at Enugu but most of the stamps were sold to foreign stamp dealers meaning that genuinely used examples of theses stamps are scarce. The complete set consisted of the following values:- one half-penny, 1d, one and a half-penny, 2d, 4d, 6d, 9d, 1/-, 1/3d, 2/6d, 5/-. 10/- and £1. Various values of the set are depicted above and below:- 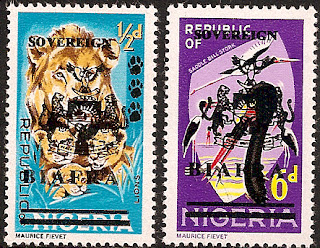 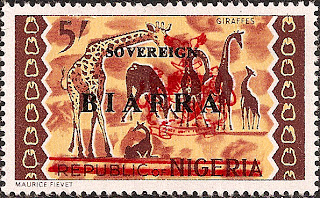 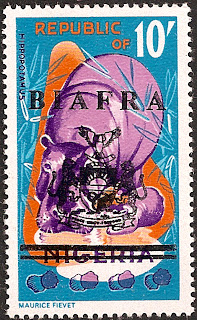 Biafra's first distinctive stamps, the set of 3 depicted below, were issued on 5 February 1968 and preceded the issue of the surcharged definitives which were released on 1 April 1968. The 2d value (basic printed matter rate) shows a map of Biafra with the national flag fitted into it, the 4d (inland letter rate) depicts the national coat of arms and national flag with the date of the declaration of independence and the 1/- value (registration rate) depicts a mother and child looking towards a rising sun, a somewhat ironic design in retrospect given how many children were to die and suffer during the war with the Nigerian central government. The stamps were printed in typography and lithography by the Lisbon Mint in Portugal:- 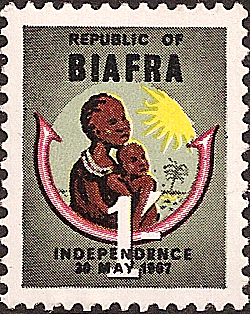 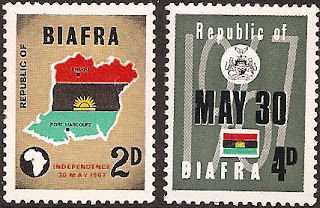 A set of 5 stamps was issued on 30 May 1968 to commemorate the 1st anniversary of independence. The set was designed by S. Okele and lithographed in Rome. The 4d value depicted a "Biafran scientist and engineer" involved in manufacturing weapons which was intended to support the claim that the Biafrans were producing their own home-made weapons although the truth was that their weapons were supplied by the French government which had opportunistically recognised the independence of Biafra as a means of gaining influence in one part of Anglophone Africa. The Nigerian government were, incidently, receiving their arms from the unlikely combination of Britain and The Soviet Union. 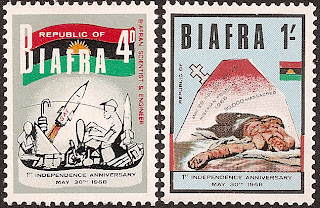 The horrific 1/- value was illustrated by a picture of a decapitated Ibo, the main ethnic group of Biafra, who had been murdered by rioting in Northern Nigeria and the inscription reads "May 29, July 29, September 29. Nigerian Pogrom 1966, 30000 massacred". The 2/6d value depicts a nurse tending to a Biafran family fleeing from the war and the 5/- depicts a £1 Biafran bank note as well as the coat of arms and national flag. 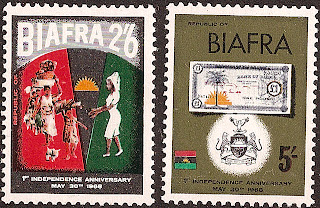 The 10/- top value emotively depicts an injured and orphaned child with the inscription "Where is Papa? Where is Mama?" and was intended to symbolise the countless infants orphaned by the war:- 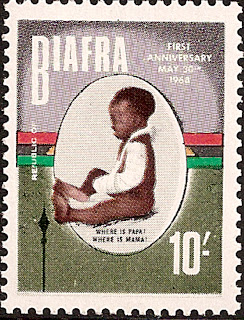 The above set was overprinted "HELP BIAFRAN CHILDREN" but Gibbons' catalogue does not list the set, stating that "There is no evidence that these surcharges were used for postage within Biafra". The catalogue also notes that in late 1968, four stamps which depicted butterflies were put on sale outside Biafra and then reissued with overprints "MEXICO OLYMPICS 1968" but again not used for postage within the country and therefore are not included in Gibbons' formal listings.
The 2nd anniversary of the declaration of independence was noted by a set of 4 stamps, lithographed in Italy, which depicted a Biafran child with a map of Africa and chains in the background. The date of issue was 30 May 1969:- 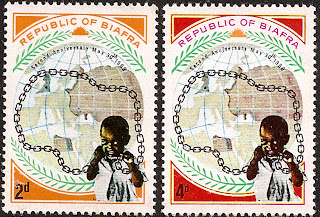 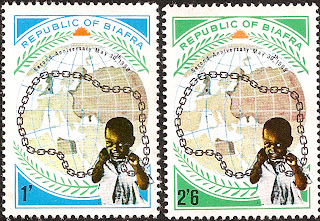 Gibbons notes that a miniature sheet was produced with the above set but does not allocate it a position in its formal listing. The final issue to be listed by Gibbons is a set of 4 stamps issued on 1 August 1969 which commemorated the visit of Pope Paul VI to Africa. The Stanley Gibbons Catalogue again notes the production of a miniature sheet but does not give it any formal listing. 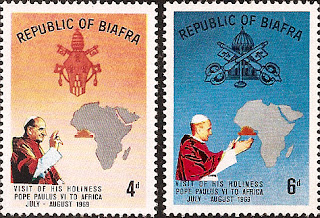 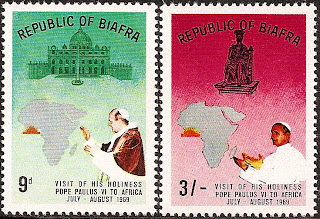 The Nigerian Federal forces gradually reduced the size of territory in the hands of the Biafran forces and eventually, on 15 January 1970, with thousands of Ibos dying daily from starvation or malnutrition, the Biafran forces surrendered to those of the central government and Biafra ceased to exist as a sovereign state. Prior to that, in December 1969, a French agency released the papal visit set with overprints applied to commemorate Christmas and then in January 1970 produced a set of overprints on the Second Anniversary of Independence set which stated "SAVE BIAFRA 9TH JANUARY 1970" and had surcharges added to them. Gibbons states that "We have no evidence that these issues were actually put on sale in Biafra before the collapse, but it has been reported the 4d Christmas issue and 2d + 8d save Biafra exist genuinely used before capitulation". These latter stamps therefore are not included in Gibbons Catalogue lists.
A collection of Biafran stamps tells an important and terrible story in the history of The Commonwealth. This is an illustration of how important stamps are in narrating modern events, some as terrible as the Biafran War, and why money-grabbing philatelic agencies and postal administrations should take their job seriously of telling the world about the countries that they represent in a sober and dignified way rather than churning out tasteless items which celebrate foreign cultures rather that those of the client nation.