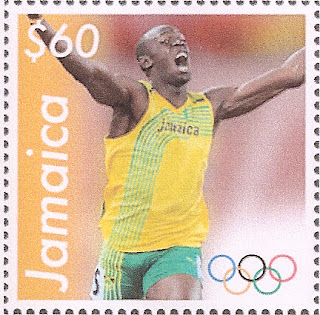 Nine months after the close of the 2012 Olympic Games in London, Jamaica has finally got around to issuing stamps to commemorate the country's highly successful athletics team which won a total of 12 medals - 4 gold, 4 silver and 4 bronze - and therefore managed to gain Jamaica the overall 18th position in the Games medals table. A colourful set of 5 stamps was issued on 3 May 2013 which featured some of the medal winning athletes although, rather unhelpfully, the stamps fail to identify the names of the athletes. Unless you are a real expert on athletics it is very difficult to know who is being depicted on the stamps. The stamps were designed by the ever-busy Andrew Robinson and lithographed by Cartor.
One design featured Usain Bolt who won gold medals in 3 events - 100m, 200m and the 4 x 100m relay and the stamp which features him is depicted above. Shelly-Ann Fraser-Price won 1 gold medal in the women's 100m and 2 silvers in the women's 200m and 4 x 100m women's relay:- 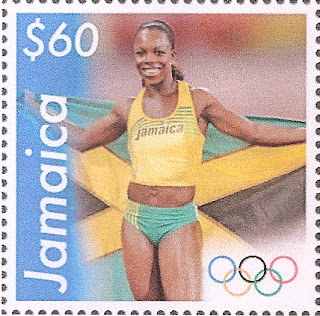 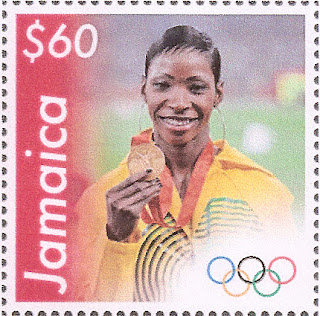 A pleasing set therefore which commemorates a great achievement by the small Caribbean country but how much better the stamps would have been if they had identified the successful medallists. Perhaps this would have been a case where an accompanying miniature sheet would have been very useful by including the athletes' names in a border which surrounds the set of stamps.
The 4 new stamps from Mauritius which were issued on 18 April 2013 depict "Sites and monuments" and were designed by Mauritius Post and lithographed by BDT International. They are much more colourful and attractive than some of the stamps issued in the past few years by Mauritius and the subject matter, that of historic buildings and sites on the island, is also quite interesting:- 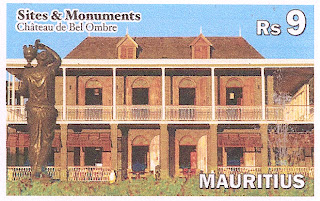 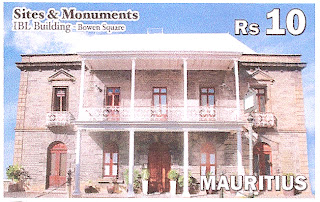 The set of 4 stamps, previously depicted, and 1 miniature sheet (depicted below) which was issued by Belize to commemorate the 60th anniversary of the coronation of Queen Elizabeth II was issued on 19 April 2013 and, once more, was designed by Andrew Robinson and lithographed by Cartor. 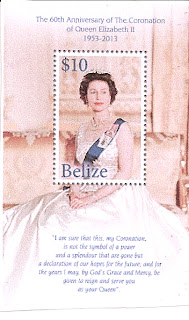