I have just received mail from the Botswana Post Office which contained 2 leaflets about current stamp issues from that country. One leaflet gave information about the 6 value Botswana Myths and Legends set which I have previously described although the leaflet gives no indication of the date of issue. The second leaflet describes and illustrates another set of 6 values which features a "Save Water" campaign. The campaign seems to have taken place in 2012 and the illustrations in the leaflet look as though the stamps have a "2012" imprint in the lower left or right corners but the front of the leaflet says that this is a "2013 Stamp Issue" without being more specific about date of release. 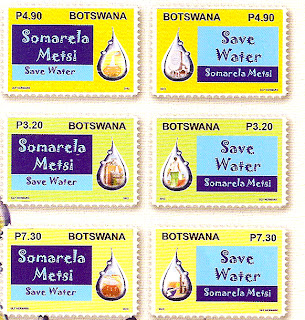 Interestingly the leaflets were mailed in the envelope depicted below which like those used by so many other postal authorities does not have postage stamps applied to it but merely an imprint at the upper right which says "PERMIT MAIL No. 10000 BOTSWANA" and there is an added applied large circular postmark with the inscription "BOTSWANAPOST PHILATELIC BUREAU *13 MAY 2013*:- 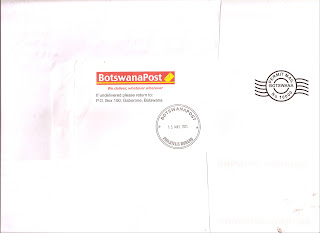 From elsewhere in Africa, two 900/- provisional surcharges issued by Tanzania which I obtained from Nigel Haworth who wrote in his latest newsletter and price list that it had taken him some time to obtain this pair of stamps. The two stamps to which the surcharges have been applied are from an old definitive series:-

I have also just managed to obtain some of the various surcharged stamps issued by Mozambique from 1998 onwards. The first, illustrated below, is a surcharge of 17000 MT on the 1000 MT (badminton) value of the 1991 Barcelona Olympic games set.  I have previously illustrated the 17000 MT on 100 MT value (tennis) from the same set which I have in my collection:- 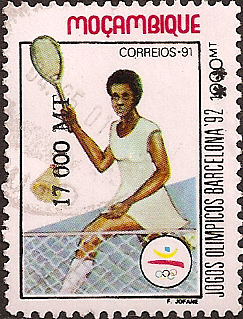 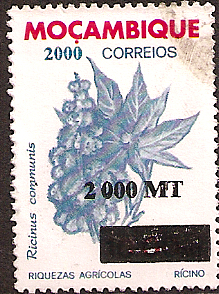 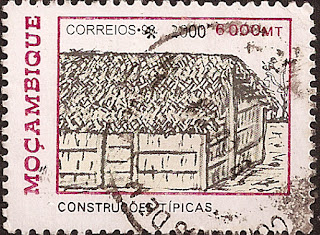 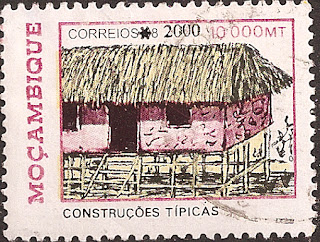 I will illustrate some more of my recently acquired Mozambique surcharges in the next blog. They are certainly a lot more interesting than recent issues for the country which have emanated from its Lithuania-based philatelic agency and they provide a real challenge to track down. These provisional overprints and surcharges are becoming more and more commonplace where impoverished postal authorities are using up old stock by overprinting it rather than paying for brand new stamps - in recent years we have had such issues, some very rare, from territories as diverse as Fiji, Mozambique, Belize, Tanzania, Tonga, St. Vincent And The Grenadines, Samoa and now, also, Guyana. Modern stamp collecting is every bit as challenging as it was more than a hundred years ago and everything has the possibility to become a philatelic "classic" although I doubt if many of the agency-produced items will ever have that term applied to them.
Posted by White Knight at 05:26