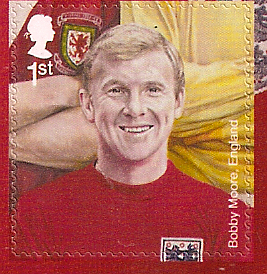 As much as I might grumble about the constant flow of new stamp issues from Royal Mail, the British postal service, I have to admit that most philatelic items that appear from that source in recent times are usually interesting and often innovative. The latest issue of 11 stamps and 1 miniature sheet which was released on 9 May 2013 to commemorate the 150th anniversary of the Football Association and the 140th anniversary of the Scottish Football Association featured designs which depicted great British footballers of the 1960's to the 1990's in a way that presented a British "Dream Team" of that period. A clever concept in itself but the items which accompany the basic issue (if 11 stamps and a miniature sheet can reasonably be described as a "basic issue") have added touches of design innovation which are worthy of note.
A "prestige" booklet was also released ("prestige" is a philatelic code word for "expensive") which sold for £11.11p and, as a very clever gimmick, was contained in a foil package which resembled the type of packaging in which children's football stickers are sold (although if each pack of football stickers were to cost as much as £11.11p, one doubts that football sticker collecting would be as popular a hobby as it is -  in fact football sticker collecting would then be as popular with young people as, well, stamp collecting is, I suppose, which long ago priced itself of the children's hobbies market.

The Prestige Booklet consists of 4 panes. Pane 1 is depicted below and contains 3 different 1st class stamps each depicting a different national flag representing England, Scotland and Wales and a 4th stamp is a contemporary Northern Ireland 1st class definitive (Northern Ireland does not have a national flag). Additionally there are 2 red 1st class definitives and 2 x 1p definitives as well as a centrally-placed label which depicts the emblem of the Football Association as well as the inscription "The FA 1863 150 years 2013". The pane was photogravure printed by Walsall Security Printers.

Pane 4 contains 6 contemporary definitives: 2 x 2p, 2 x 5p and 2 x 10p and was also photogravure printed by Walsall S.P. All definitive values of both panes have the security code M13L.

The 2nd and 3rd panes face each other at the centre of the booklet and were lithographed by Cartor. Unlike panes 1 and 4 as well as the footballer stamps which appear in ordinary sheet and miniature sheet format, the booklet stamps were printed on self-adhesive rather than gummed paper thus producing a further 11 stamps in this particular set.

Exhausted collectors must also buy a £3.60p retail booklet which is in the usual self-adhesive format with 4 x 1st red definitives (security code M13L) flanked by 2 footballer stamps - on the left is the "George Best" stamp and to the right is the "Bobby Moore" stamp:-

This is an excellent set of stamps and associated items and bound to be popular with the British public but it provides another financial burden on stamp collectors who continue to want to have  a "complete collection" of British stamps - £27.91 to buy just the basic set, miniature sheet, retail booklet and prestige booklet and then, as usual there are post cards, a presentation pack and, if you must, a first day cover. But I wonder where Royal Mail will find the biggest profit - its Dr. Who issue or its Footballers collection?
Meanwhile, I draw attention to the latest set from the Caribbean island of Montserrat - a sheetlet of 6 stamps and a single-stamp miniature sheet (I do not yet know the date of issue of this release) on the subject of "minerals of the world". This issue represents all that is bad about modern new issues and contrasts greatly with the British footballers set which has some original and interesting points about it. The Montserrat designs are dramatically uninteresting and one has to question why on earth the issue has been made. Why not "minerals of Montserrat" at least (the island's volcanic recent history would indeed make such an issue relevant to the island) and if produced by a designer with a bit of flair and an interest in what he is actually producing, a highly collectable issue could be the result. This is not a set that I shall be adding to my Montserrat collection:- 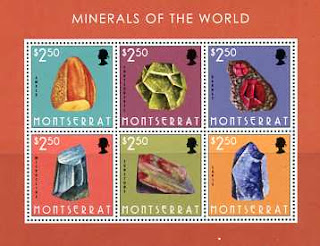 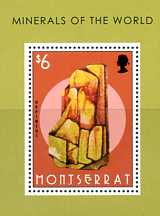