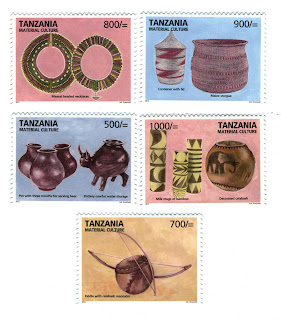 The first issue from Tanzania in 2012 has finally become available although it had been released on 15 February 2012 and is on the theme of material culture and consists of 5 stamps (depicted above) and a sheetlet of different values and a miniature sheet. Below I depict one of the 4 miniature sheets issued by Tanzania on 9 December 2011 to mark the 50th anniversary of the independence of Tanganyika:- 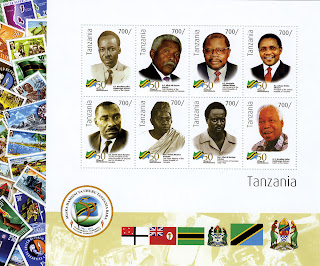 The 8 stamps depict Presidents and Vice-Presidents of Tanzania as well as the various flags which have flown over Tanganyika in the past and present. In the lower border of the sheet, the first flag at the left relates to that which was flown from 1884 to 1916 when the Germans ruled the territory and the second depicts the civil ensign of the country, with its flag badge depicting the head (and neck) of a giraffe, when it became a League of Nations Mandate of Great Britain in 1919, the British having occupied Tanganyika  by 1917 during the First World War. The third flag from the left is the national flag adopted by Tanganyika when it achieved independence on 9 December 1961 as a Monarchy within The Commonwealth and retained by it when the country became a Republic in 1962. The flag furthest to the right is the current national flag of Tanzania which was adopted on 26 April 1964 when Tanganyika combined with Zanzibar to form The United Republic.
A large number of new issues have appeared recently. From St. Vincent And The Grenadines comes a Christmas set which was issued on 28 November 2012 and consists of 5 stamps and 1 miniature sheet:- 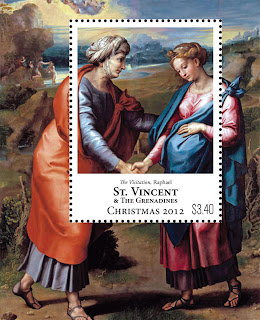 I have previously mentioned the Pitcairn Islands Dickens Bicentenary issue which was released on 5 December 2012 and consists of 4 stamps but I can now include a better illustration which shows that as well as various portraits of Dickens, each stamp also depicts one of his characters - I recognise Sairey Gamp from Martin Chuzzlewit on the $1 value, The Artful Dodger from Oliver Twist on the $1.80, Pickwick from The Pickwick Papers on the $2.10 and, I think, Ebenezer Scrooge from A Christmas Carol on the $3.00 value. They are very good designs but it is a pity that they feature characters very frequently depicted on Dickens stamps rather than some which have never yet appeared philatelically:- 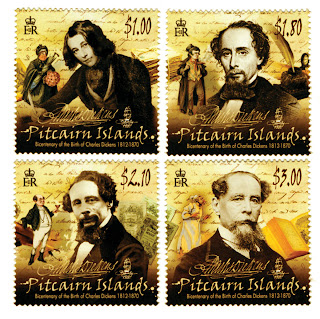 Nevis issued 3 sets on 28 November 2012:- Beetles and Butterflies of the Caribbean area (6 stamps and 2 miniature sheets); Michaelangelo Quincentenary (4 stamps and 1 m.s.) and "Classic hits" of the US musician, the late Elvis Presley (4 m.s.):- 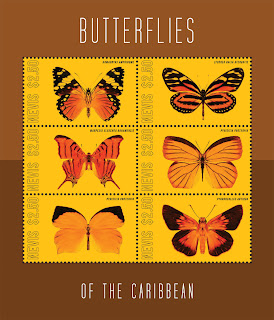 There were 3 issues from Ghana on 12 December 2012: Michaelangelo quincentenary (3 stamps and 1 m.s.), Toxic mushrooms (!) (2 sheetlets, each of 3 different stamps) and, even more bizarrely, aircraft carriers of foreign navies (sheetlet of 4 different stamps and a miniature sheet):- 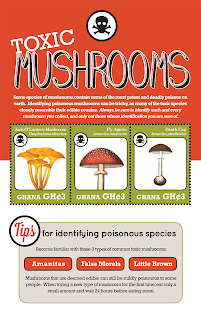 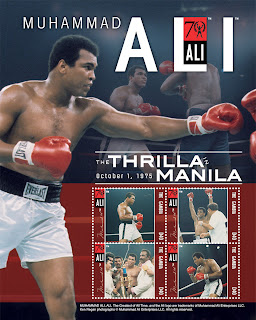 A date of 13 January 2013 is given for an issue of 4 stamps in a sheetlet by The Gambia which commemorates the Year of The Dragon. This is rather confusing since 2013 is the Year of the Snake - either the information is incorrect or a design error has been made, one which is almost as bad as the Guyana Edward XIII error (see previous blogs). 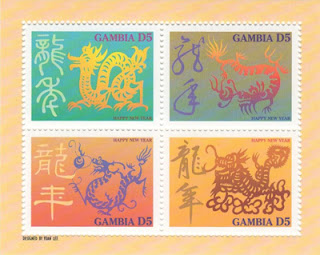 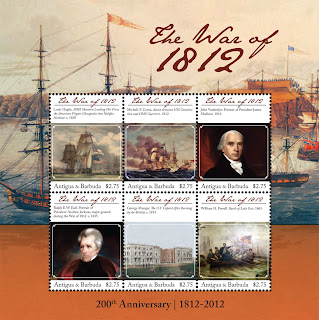 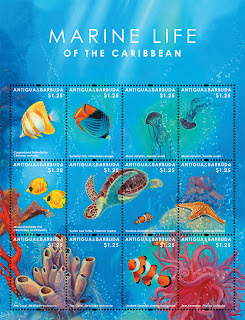 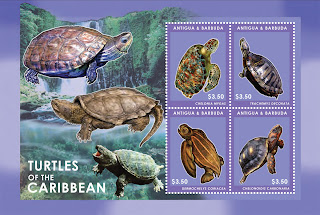 More Chinese new year issues from the Caribbean area - from Grenada, issued on 28 November 2012, a miniature sheet of 2 stamps depicting creatures of the Chinese zodiac with a similar issue being released by Guyana on 5 December 2012:- 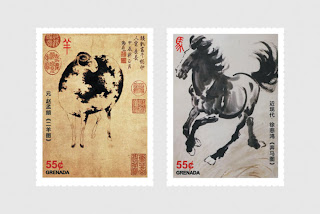 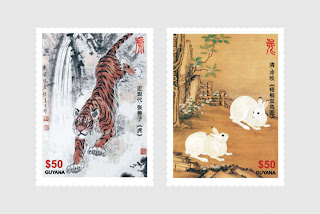