During 2012, South Africa has issued a number of worthwhile stamps, some with interesting and original designs. A miniature sheet was issued on 6 September 2012 to commemorate the 360th anniversary of the landing of the Dutch at The Cape:- 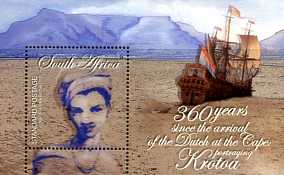 The excellent and free South Africa Post Office philatelic magazine, Setempe, details the story behind the stamp and points out that the Dutch did not originally intend to colonise South Africa, they merely wished to establish a staging post for their ships sailing around The Cape en route to the East Indies, the base of the spice industry. However the staging post needed to trade with the local inhabitants, the Khoikhoi, but the Dutch East India Company, the VOC, wished to restrict contact between the Khoikhoi and the Company's employees so the Dutch were not able to employ the Khoikhoi and so there was a labour shortage. Thus, some of the Dutch established farms in the area to produce the necessary crops for the Company's ships to be provisioned with and as the number of these "Free Burghers" increased so they expanded the territory they worked northwards and eastwards over the lands of the Khoikhoi. Krotoa, a Khoikhoi woman born around 1642, was employed as an interpreter by Jan van Riebeck, the first Dutch Governor of The Cape, and became the first Khoikhoi woman to be named in the European records of South Africa. She was baptised as a Christian on 3 May 1662 and married Peter van Mierhoff, a Danish surgeon, on 26 April 1664, this being the first recorded marriage between a European and a Khoi at The Cape. Krotoa and her husband moved to Robben Island and had a family but Peter died in 1688 while on an expedition to Madagascar. Krotoa had 3 surviving children but sadly she became an alcoholic and was imprisoned on one occasion for disorderly behaviour. She died on 30 September 1874 at The Cape. Because of Krotoa's historic role in establishing a relationship between the Dutch and the indigenous peoples of The Cape, a portrait of her is featured on the miniature sheet along with a VOC ship. The item was designed by Lien Botha.
Other issues of 2012 are:- 6 January: Centenary of the SANNC (1 stamp); 22 February: Commemoration of Rev. John Dube (1 miniature sheet); 2 April: George Pemba centenary (10 stamps)l 20 April: South African national symbols (8 stamps):- 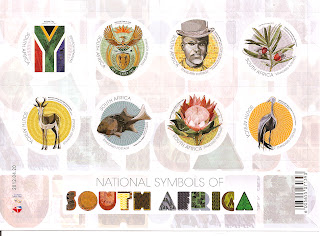 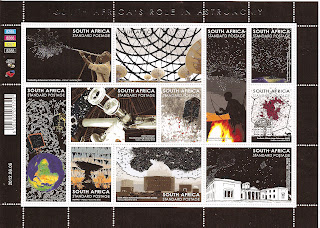 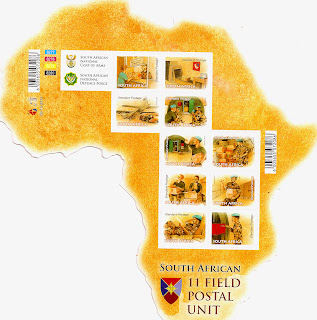 26 October:- Centenary of the Township of Alexandra in Johannesburg (5 stamps in a sheetlet).
Some stamps from Sri Lanka are slow to find their way to new issue dealers - I have just obtained an example of the miniature sheet which was issued on 28 October 2011 which depicts vintage and classic cars:- 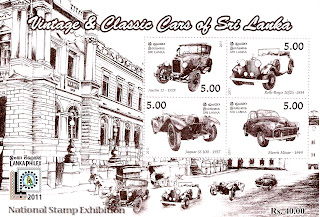 Also slow to arrive has been the miniature sheet issued on 21 January 2012 which depicts "Legends of Sinhala Cinema":-