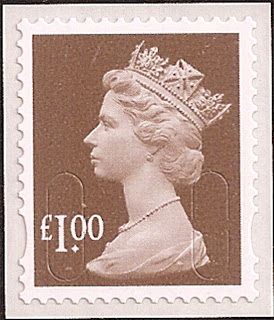 With the official date of issue for Royal Mail's new definitive stamps being 3 January 2013, I was somewhat surprised to find the set I had ordered from the Philatelic Bureau being delivered to me in the post on 2 January 2013. I suppose, if I could be bothered, that I could affix these to an envelope and get a postmark cancelling them showing that they were used one day before they should have been, but frankly I'm not sure that I really care. The set comprises the usual Machin designs on self-adhesive paper but with four values in new colours (1st, 1st large, 50p and £1.00).

Additionally, the 1p, 2p, 5p, 10p and 20p definitives are reissued with a security overlay added to them for the first time. All stamps were photogravure printed by De La Rue and all of them have the security code M12L except the 1st large which has the code MA12. Additionally, also released on 3 January 2012 (or in my case, 2 January), are 3 retail booklets of the 1st class stamp in its new colour: 6 x 1st, 12 x 1st and 4 x 1st large. Both the 1st and 1st large booklet stamps have the security code MA12.

Queen Elizabeth also features on a new definitive stamp from Canada which will be issued on 14 January 2013. In the denomination of the permanent domestic rate, it is self-adhesive and sold in booklets of 10 stamps and was lithographed by the Canadian Bank Note Company:- 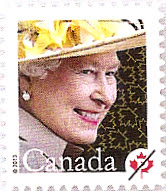 On the same date, Canada will also issue 5 Permanent domestic rate stamps in the Canadian Pride series, again lithographed by Canadian Bank Note, and issued in self-adhesive booklets of 10 or 30 as well as in a gummed miniature sheet. Again, on 14 January, the Baby wildlife definitive series continues with 4 values- Permanent domestic rate, $1.10, $1.34 and $1.85. The domestic rate value is sold in coils of 100 stamps and the higher values as coils of 50 stamps and booklets of 6 stamps (all self-adhesive). There is an accompanying gummed miniature sheet:- 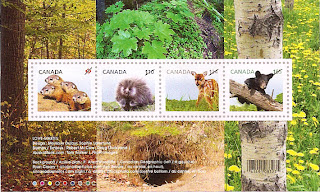 Canada's first issue of the new year is to be issued on 8 January 2012 to commemorate the lunar new year of the Year of the Snake. There are 2 values:- Permanent domestic rate, produced gummed in a sheet of 25 stamps, and $1.85 value, sold as a self-adhesive in booklets of 6 stamps or in a gummed souvenir sheet:- 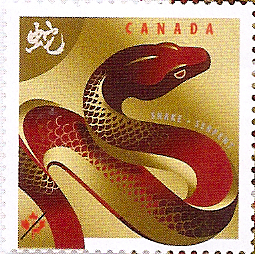 The 1.85 value is also included in a "transitional sheet" of 2 stamps, the other design featuring a dragon to mark the end of the Year of the Dragon:- 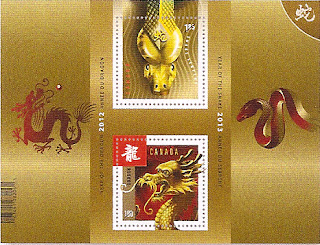 Tuvalu issued the last of the diamond jubilee sets of 2012 when it released a sheetlet of 4 stamps and a miniature sheet on 31 December 2012 which was cutting it rather fine:- 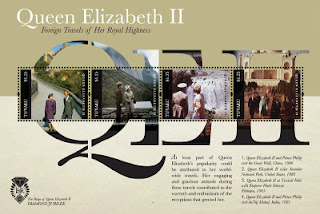 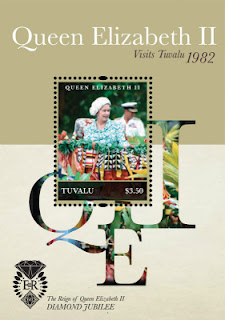 It appears that some British dependencies failed to philatelically commemorate their monarch's diamond jubilee during 2012 including The Virgin Islands, Anguilla and the British Antarctic Territory. Likewise, there were no issues from the Australian territories of Christmas Island and Cocos (Keeling) Islands. Most of the Queen's Realms issued commemorative stamps for the event but notably Jamaica did not. A number of other Commonwealth territories which have tended to jump on the Royal Omnibus bandwagon in the past have also failed to issue stamps this time round. Perhaps they will issue stamps during 2013 to commemorate the 60th anniversary of the Queen's coronation.