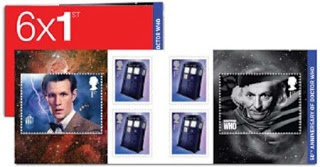 On 28 November 2011, in this blog I published a spoof "leaked" 2013 new issue programme for Royal Mail. It was intended to be outrageous and illustrate just how bad a new issue programme by that greedy postal administration could be, aiming to bleed every last penny from the devoted collector of British stamps. I never dreamed for one moment that such nonsense could ever happen - surely even Royal Mail would not issue numerous expensive items on the pretext of celebrating something as trivial and insignificant as a television programme. The spoof "leak" suggested that Royal Mail would have a"Dr Who Year" of multiple issues scattered over several months and would include a Dr Who definitive, booklets, prestige booklets and "smilers" or "business" sheets. Incredibly, this joke has become a horrible realty for stamp collectors. The prediction that Royal Mail would issue 11 stamps each depicting a different actor who plays the character has come true (really, it was a joke, I can not believe they actually intend to issue such a set - the Queen has ruled Britain for 60 years and she only qualified for 8 stamps in 2011!) In addition to the basic 11 stamps and accompanying 5 stamps in a miniature sheet (see blog no. 184 of 26 December 2012), we now know that there will be a retail booklet (see above) comprising 1 each of the stamps which depict the 1st and 11th Doctor Whos and 4 definitive-sized stamps which depict the TARDIS, Dr Who's space and time-travelling machine. So, if only in booklet and miniature sheet form, we really will be getting a Dr Who definitive! 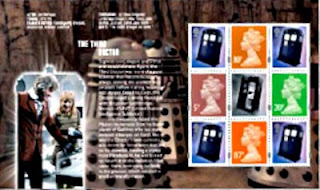 The TARDIS definitive will also appear on 1 of the 4 panes of stamps which will be included in the Dr Who prestige booklet (price £13.77 although the total face value of stamps inside amounts to only £12.82).

It is not too surprising that a "Smilers" sheet will also be produced, again using the TARDIS definitives alongside illustrations of the enemies of Dr Who. I fear this is not the end of it all and that by the end of 2013, collectors of British stamps will feel thoroughly fed-up with Dr Who and fleeced by Royal Mail. Remember, there is also money to be made from special covers, first day covers, presentation packs, PHQ postcards and who knows? - perhaps we will even have Dr Who Post and Go stamps, it seems too hard to think that Royal Mail will miss the opportunity of producing Dr Who versions of its current form of money-spinner. 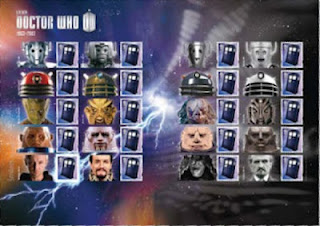 The most worrying thing of all is that the views of dedicated stamp collectors carry little weight here - the various Dr Who products that Royal Mail produces during 2013 will be immensely popular with the general public, such is the current popularity of Dr Who, and numerous grandparents will be scurrying around buying these products for their Dr Who-loving grandchildren as well as a worrying number of single young men who have not yet found themselves a girlfriend. Royal Mail foresee big profits in this little philatelic enterprise and I think they are right. But in co-incidently doing what a spoof blog suggested they might do, this greedy organisation may finally have broken its regular collectors' backs.