185. New stamps From Anguilla And Isle Of Man.

In recent years, a new issue from Anguilla has become something of a rare event but a new set of stamps was indeed issued by the territory on 26 November 2012. Five stamps were released to commemorate the 40th anniversary of the Royal Anguilla Police Force. The designs are displayed in the photograph below being presented to a reception to launch the stamps by Deputy Commissioner Alice Proctor. The designs seem to be in the usual style of Anguillan stamps and apparently designed by the artist Roger Vigurs who has designed many Anguillan stamps in the past. I am a little surprised to read the news about this new issue because, as far as I know, Anguilla has not issued a set of stamps to commemorate the Diamond Jubilee of the Queen of Anguilla, Elizabeth II. Perhaps a set is still to appear. 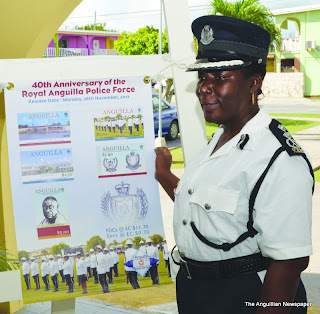 The island will issue a highly original set of 6 stamps on 6 February 2012 to commemorate the 60th anniversary of the Coronation of Queen Elizabeth II and the unusual approach to the subject is a series of designs which depict memorabilia of previous coronations from the time of Queen Victoria onwards:- 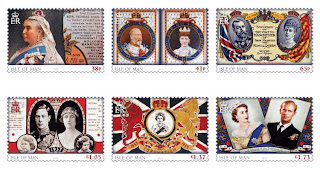 A further highly interesting forthcoming issue from The Isle Of Man will be released on 11 January 2013 in the form of 6 stamps which commemorate the return of the manuscript of the Chronicles of the Kings of Man and The Isles to the island. The stamps also commemorate the loan of 6 Lewis Chessmen which are to be shown in an exhibition entitled The Forgotten Kingdom to be held at The Manx Museum during 2013. The Chronicles, which have been kept at The British Library for the past 200 years, are the earliest written accounts of events in the Isle of Man and were written by the monks of Rushen Abbey. The exhibition highlights The Kingdom of Mann which existed in medieval times and included not only the island itself but also Skye, the Inner and Outer Hebrides and Argyll. The chess pieces to be displayed at the exhibition and also depicted on the 6 stamps were found on the west coast of the island of Lewis and are thought to have been carved in Norway at the start of the 13th century. In all 78 pieces were found, some with red staining to provide a red opposition to the white pieces. 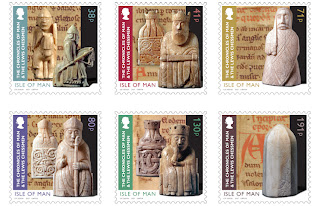 All of these Manx issues are very well designed, interesting and highly relevant in content, are  highly buyable and give the Manx Post Office an excellent start for its philatelic programme in 2013.