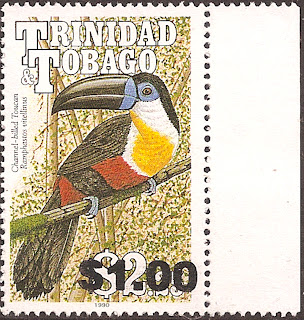 I have just returned home after an interesting trip to some central American and Caribbean countries, including four Commonwealth countries in the area - Jamaica, Trinidad And Tobago, Saint Lucia and Grenada. In Port Of Spain, I was able to buy the previously illustrated set of stamps which was recently issued to commemorate the 60th anniversary of the independence of Trinidad And Tobago and discovered that the Trinidad And Tobago Post Office has recently issued a new provisional definitive which is a surcharge on the $2.25 value, featuring a toucan, of the 1990 birds set. The original set, printed with a "1990" imprint and watermark spiral script CA sideways, was replaced by "wildlife"-themed definitives in 2001 but some values had been reprinted on paper with spiral block CA sideways watermarked paper although the toucan stamp was not one of the values affected by the reprint. The toucan stamp was reissued on 26 January 2001 with a 75c value surcharge carried out in black ink by Cariflex Ltd. The new $1.00 surcharge was apparently released in August 2012 but I do not know the printer. I also bought another example of the 75c surcharge and found the surcharge to be notably altered in position compared with the example I bought originally in 2001:- 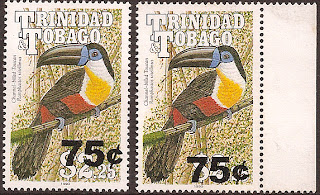 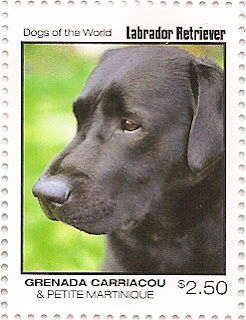 Having previously obtained the pair of stamps issued by Jamaica to commemorate its Diamond Jubilee of Independence celebrations, I did not find anything new to buy on a visit to the post office in the port of San Antonio. The same was also true on a visit to the main post office in Castries, the capital of Saint Lucia, which I visited on 30 November. The post office counters there were selling various values of the "fruit" definitive set and the single value issued in 2011 on the theme of AIDS for use by customers on their mail but they were also advertising this year's royal diamond jubilee set as being for sale. So far in 2012, I was told, that is the only set to have been issued by Saint Lucia and apparently no more were expected. I asked about a possible Christmas stamp but the counter clerk told me that he did not know that any such issue was being produced this year. The Head Post Office in Castries does not appear to have a special counter for philatelic sales which is a shame as at least one couple showed an interest in buying the Diamond Junibee stamps while I was there but, having no identifiable counter to buy the items from, walked away without buying anything.
On arrival at St. Georges in Grenada, I found a special stand set up by the Grenada Post Office to sell philatelic items, obviously at face value, to tourists arriving on cruise ships - a commendable effort to promote the local stamps. The stand was run by a lovely lady named Jennifer who allowed me to look at the large range of issues for sale, some of which dated back several years, but both she and I were disappointed that the Kirani James (Grenada's Olympic gold medallist) commemoratives, announced some months age, were not yet available for sale - apparently the Post Office had received them but as of 29 November, they had not been finally cleared for issue at the post offices. I did buy a couple of items which I would perhaps not normally have purchased - the miniature sheet issued a couple of years ago to commemorate the 150th anniversary of the Victoria Cross, one design of which at least featured a Grenadan - Private Johnson Beharry VC:- 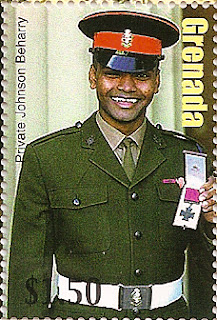 and the sheetlet of "Dogs of the World" stamps issued for The Grenada Grenadines in 2011 because one of the stamps featured a black labrador which could be added to my labradors on stamps"- themed collection (shown above).
Sadly, I did not see anyone else taking an interest in the special post office stand although many of the travelers were elderly and of an age when stamp collecting seems to be increasingly popular - I hope that Jennifer's excellent efforts and polite enthusiasm were rewarded by satisfactory sales.
Before setting off on my travels I managed to acquire a used example of one of the recent Ghana provisional surcharges which I had not previously seen being offered for sale. I am not sure of the date of issue but, as can be seen, this particular example bears a postmark dated 18.9 2011, I think:- 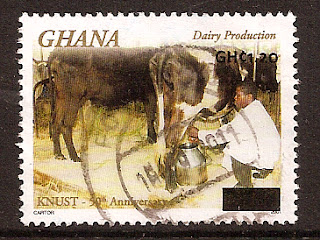 From elsewhere in the African Commonwealth I have received some other interesting items. From Namibia, there are 2 versions of the circular miniature sheet which commemorates the 20th anniversary of Nampost, issued on 31 July 2012. As can be seen, the sheets feature 2 versions of the Nampost logo, one of which is incorrect:- 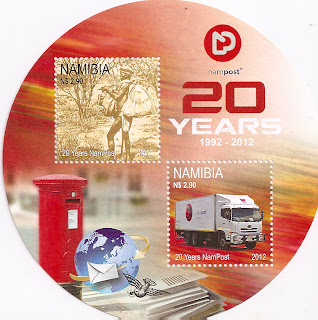 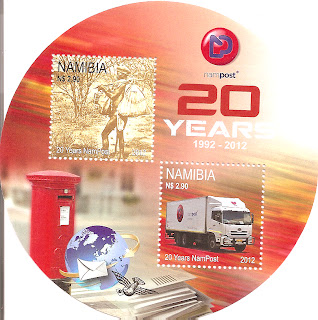 I also like very much the set of 4 stamps issued by Namibia on 1 October 2012 which depicts 4 different species of mongoose:- 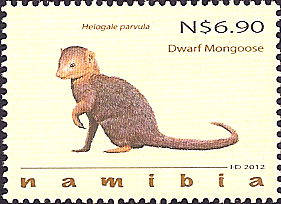 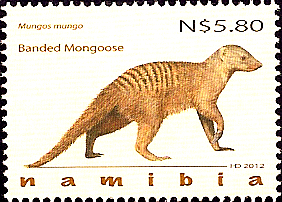 From Malawi are a set of 5 stamps and a miniature sheet which contains 5 different stamps on the theme of AIDS and HIV:- 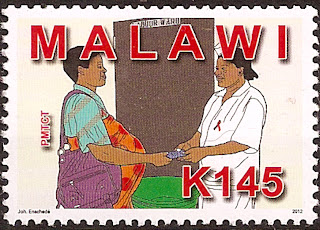 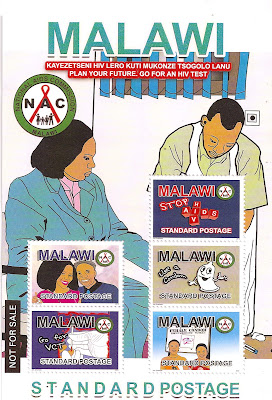