I was very interested in a short auction report which appears in the January 2013 edition of the excellent  Stamp Magazine, the most lively of the currently published British philatelic magazines which are on sale at newsagents in Britain. The report mentioned a recent sale by Kelleher Auctions of a letter sent from one of the British colonies in north America to another, 11 years before the American unilateral declaration of independence and subsequent rebellion against Britain. The letter listed the items in the estate of the late Chief Justice of East Florida, James Moultrie, a document humdrum and everyday in one respect, but given interest by the application of a British tax handstamp. It was the need to pay taxes, which the American colonists felt no obligation to do, that made these tax stamps the very symbol of the cause for revolution. Stamps indeed can be said to have started a war.

The letter was sent in 1765 from Savannah in the colony of Georgia which had been established by Britain in 1732 to John Moultrie, the Governor of the British colony of East Florida which had been established in 1763. The reverse of the cover bore an extremely rare SAVANNA straight-line handstamp with a Bishop mark of AP 25. The item realised £45,541 in the auction, ten times its estimate. Doubtlessly this reflected the rarity of the Savannah postmark but the whole letter seems to be a remarkably interesting item.  I find it particularly interesting in that it recalls a distant time when the British colonies still existed in north America and it brings to our attention the little known British colony of East Florida along with its sister colony of West Florida.

After the defeat of the French and their allies in the Seven Years War, the British took possession of Spanish Florida and French Louisiana east of the Mississippi (except New Orleans). It did not seem possible to administer this large amount on new territory as a single entity so the British established the two new colonies of East Florida, with its capital at the old Spanish town of St. Augustine, and West Florida, with its capital at Pensacola; the colonies being separated by the Apalachicola river. Many English Americans and Scottish-Irish Americans moved to these colonies after the end of the Seven Years War and an assembly was established there as part of the colonies' government. The territories were strongly loyal to Britain and when the rebels in the other American colonies summoned delegates to the First Continental Congress in 1774, the Floridans refused to attend. Florida retained its loyalty during the rebellion against Great Britain but the Spanish entered the war on the side of the rebels and captured Pensacola in 1781 and were awarded Florida after the defeat of the British in 1783 by the Treaty of Paris. Thus these little known early British colonies came to an end but the recently auctioned letter is a wonderful example of their ephemeral postal history and testament to their one-time existence. 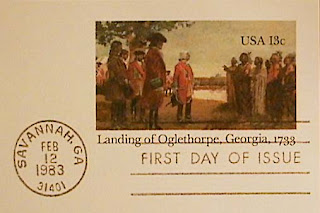 As regards Georgia, the colony's charter had been granted to General James Oglethorpe on 21 April 1732 by King George II. Oglethorpe (shown above on a US stamp of 1933) saw it as being a haven for resettled debtors and "the worthy poor" and he established strict laws for the colony including a ban on alcohol. He was against slavery and thought that it was far better to have numerous farms on which several people found employment rather than to have large plantations. He also foresaw that his "sturdy farmers" would defend the southern part of England's colonies against the Spanish in Florida. The colony's charter forbade slavery.

Oglethorpe arrived with the first settlers at Yamacraw Bluff - what became Savannah - on 12 February 1733 (as depicted on a pre-stamped postcard issued by the United States Post Office in 1983) and established a camp there with the help of Chief Tomochichi. The first settlers numbered 116 persons. Having been ruled by the trustees of the founding company, Georgia became a crown colony on 7 January 1755. Slavery was permitted from 1749 and by the time of the rebellion of the Thirteen Colonies, Georgia had taken on the characteristics of the other territories.