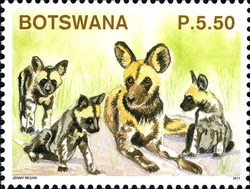 I have finally tracked down the list of stamps issued by Botswana in 2011 although I have not yet found any information for the country's issues of 2012. My favourite set is the 4 stamps issued on 18 December 2011 to depict 4 excellent illustrations of wild dogs of Botswana:- 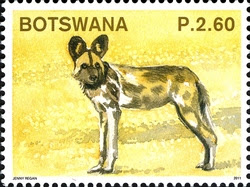 The other issues of 2011 were:- 11 March: Biodiversity, the "morning glory" flower, 4 stamps; 9 September: the Botswana national population census, 4 stamps; 25 October: malaria prevention campaign, 4 stamps and 21 November 2011: WWF the white rhinocerous, 4 stamps and 1 miniature sheet (the latter was printed in inadequate quantities and a reprint was necessitated). All sets were lithograph printed by Enschede.

The first stamps of Jersey's enormous new issue programme for 2013 will be 6 stamps on the theme of "Frost and nature" to be issued on 8 January:- 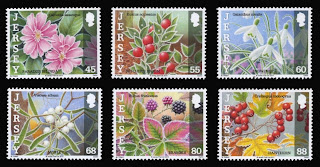 That set will be followed on 5 February by a set of 6 stamps and the inevitable miniature sheet (£2 face value) on the peculiar theme, "The Legacy of Queen Victoria: Edward VII". The designs depict various statues of the eldest son of Queen Victoria, each from a different site in Britain. I can not deduce why this theme was chosen for a set of stamps by Jersey but perhaps I have overlooked an explanation which the Jersey Post Office may have put out. 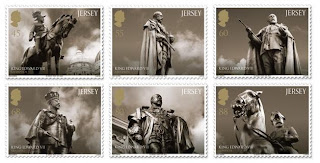 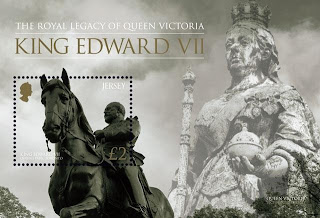