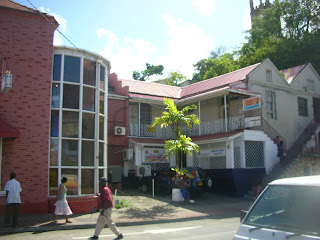 In my last blog I recorded that I had recently visited 4 Caribbean Commonwealth countries and one of the most enjoyable visits was to lovely Grenada and its remarkably bustling and busy capital of St. George's. I took the opportunity to take a few postal history-related photographs as well as to send myself a postcard from the island. According to the excellent website of the Grenada Postal Corporation, there are 8 district post offices and sub-post offices in Grenada with a further 2 situated on the Grenada Grenadines, one at Carriacou and one at Petite Martinique. The central post office in St. George's is situated right in the heart of town on Bruce Street and is pictured above. The stamps on sale there for use on genuine mail by the general public are the basic definitives as can be seen below, a $1 value being applied to the postcard I sent from there and cancelled by a 4-ringed circular postmark with GRENADA POST OFFICE (I'm guessing at the last word as it is illegible on my postcard) around the top and BRUCE STREET around the bottom with DEC 3 2012 in three lines at the centre of all the circles. 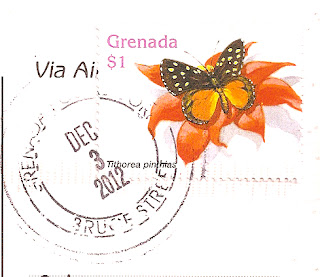 Outside of the post office, a banner was hanging, shown below, which publicised the Grenada Postal Club with the slogan "Preparing To Host Caribbean Postal Togetherness 2014". I wondered if this represented a local philatelic society but in fact the Grenada Postal Club is actually a society for postal workers which organises cultural and sporting events for them in conjuction with postal workers from some of the other Caribbean Commonwealth islands. 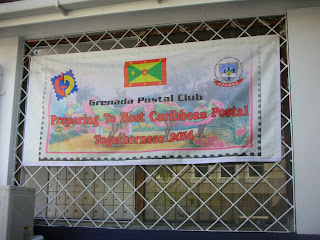 Across the bay from the centre of St. George's is Grand Anse post office which is rather bigger and more modern than Bruce Street post office as can be seen below:- 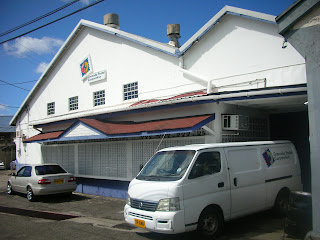 Near to it is an old red pillar box as may be found anywhere in Britain with the royal cipher GR which I guess must date from the reign of King George V:-

It rather looked as though it was in need of a fresh coat of paint and had the appearance of not actually being in use though that may not be the case as the slot for posting was not sealed up. 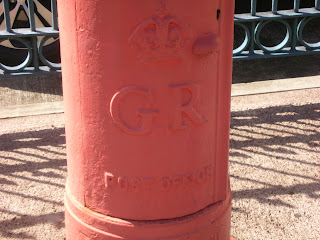 At the Grand Anse post office, I saw two modern postal vehicles both with the Grenada Postal Corporation logo:- 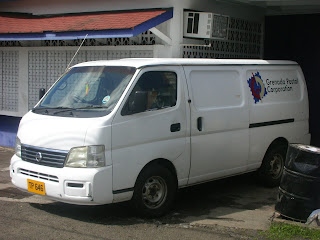 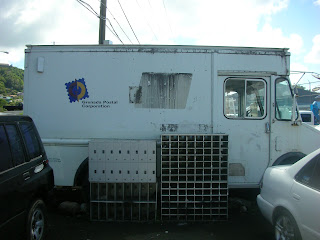 Other post offices are sited at Grenville in St. Andrews Parish, Victoria in St. Marks Parish, Point Salines International Airport, Sauteurs in St. Patricks Parish, Gouyave in St. Johns Parish and at St. Davids in the south-east of the island. Grenada Postal Corporation seems to be an excellent organisation, certainly it handled my postcard very well, with it arriving at my home in England just 4 days after it was posted.
This visit gave me a much improved impression of Grenada's postal service which sadly, for many years, has allowed its foreign philatelic agents to produce enormous numbers of stamps on its behalf, the subject matter of which frequently has no relevance to the island itself. However, it is possible to form a pleasing collection of stamps from Grenada, even today, if one is ruthless in not collecting all the irrelevant and excessive material produced by the foreign agents. Such a collection costs considerably less than a new issue collection of the stamps of Australia or Great Britain. I spoke to one or two Grenadans about their nation's stamp issues and they too expressed a resigned distaste of the sets which commemorated foreigners "who probably had never even visited Grenada".