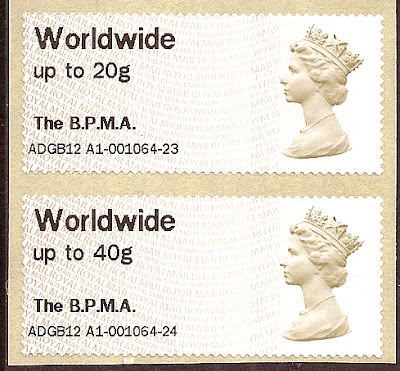 The first of a new series of Post And Go stamps were released by Royal Mail on 3 December 2012. They are only obtainable from Hytech machines situated at the British Postal Museum and Archive in London. The machines are situated in the foyer of the Search Room at Freeling House. The first items are available in two designs - the standard Machin Post and Go design as depicted above and the Christmas robin design, shown below. The usual 6 values are available in each design. The stamps are distinguished by the additional inscription "The B.P.M.A." which is different from the inscription which has been illustrated by some other sources including recent editions of some British philatelic magazines. 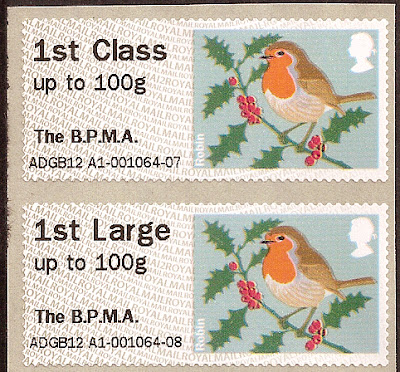 One recent British issue which appears to have received poor publicity is yet another Diamond Jubilee item - a booklet of 6 1st class "Jubilee definitives" as shown below. On the inside front cover is a quotation from the Queen, "I shall always work to advance the happiness and prosperity of my peoples". I think this issue, released on 1 October 2012,  may well have been missed by a number of collectors and I have the feeling that this is "the one to get".

On 16 October 2012, India issued 4 stamps and a miniature sheet which contained one each of the stamps on the subject of "Endemic species of Indian Biodiversity Hotspots". They are interesting and attractive but the title of the issue is interesting in its own right - we seem to have travelled a long way from a simple "wildlife of India" issue. 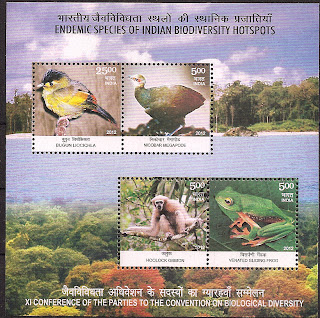 I have previously mentioned the Malaysia coinage issue which was released on 16 July 2012. It is very well printed and now that I have received my set, I illustrate 2 of the designs of the set of eight which are all 60 sen values:-

I have also now obtained my specimen of the Malaysia Diamond Jubilee miniature sheet which was issued on 13 September 2012 and I also illustrate that highly collectable issue:- 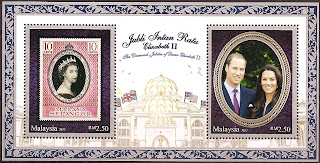 Also obtained in the last couple of days has been my order of the personalisable Canada Picture Postage 12 stamps which I have also previously mentioned and which were issued on 5 November 2012. I illustrate 2 of the designs:- 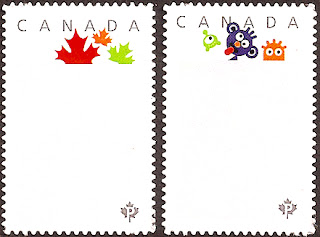 Back to India, which has issued another miniature sheet of interest - an item released on 12 October 2012 to commemorate "Philately Day". The stamp design does not actually give the precise date of Philately Day but presumably it coincided with the date of issue of the miniature sheet:- 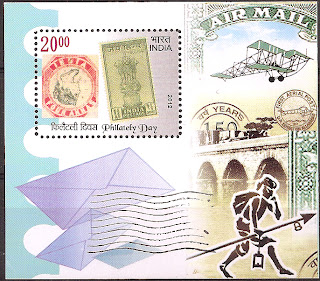 Yet more items produced by Stamperija with the name of Mozambique printed on them, this time the theme is "Anniversaries II", some of them obscure and none of them of direct relevance in subject matter to Mozambique. The date of issue is given as 30 June 2012 and among the 60 stamps and 10 miniature sheets are items related to the artist Gustav Klimt:- 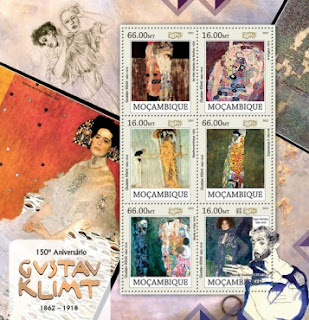 and the aviator, Harriet Quimby:- 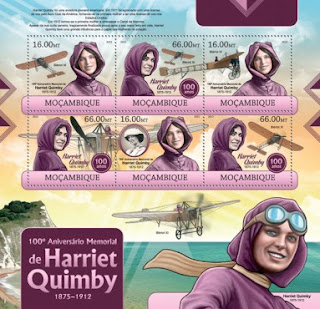 So by June, Mozambique had "issued" 464 stamps and 86 miniature sheets during 2012! Finally, a new definitive set has been announced for Ascension Island to be released on 15 January 2013. It features aircraft and is designed by Robin Carter and lithograph printed by BDT International Security Printers:- 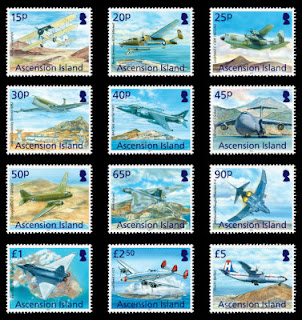