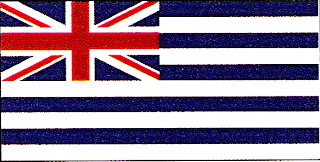 One of the ports of call on my recent visit to central America and the Caribbean was the island of Providencia in the island group of San Andres, a department of Colombia. It was an exciting place to visit since it had once been part of what was called The Mosquito Coast which for a period in the 19th century had been one of the more obscure parts of The British Empire, albeit one with a rather limited postal history.


Our ship arrived off Providencia on a day of poor weather and rough seas, as can be seen above, making landing there very difficult. The island was discovered by Daniel Elfrith in 1629 who told the Governor of Bermuda about it leading to involvement of the Earl Of Warwick and the establishment of the Providence Island Company. The first settlers, English puritans, landed on 24 December 1631 and established a colony which had two aims - forming a commonwealth of God-fearing people who would support themselves by growing tobacco and cotton and to provide a base for assaults on Spanish shipping in the area of the Spanish main. African slaves were brought to the colony to work on the plantations although the industries failed and were replaced by sugar cultivation. In May 1641, a Spanish treasure fleet overran the colony which consequently came to an end.
The arrival of the colonists on the island had the consequence of bringing the British into their first contact with the Miskito Indians who lived on the nearby Mosquito Coast, on the eastern coast of what is now Nicaragua and southern Honduras. The Providence Island Company sent the son of the King of The Mosquito Coast to London to visit the court of King Charles I and the prince returned to central America on his father's death to become king there. Despite the loss of Providence Island, the English resumed contact with The Mosquito Coast in 1655 after seizing Jamaica from the Spanish and King Oldman visited the court of King Charles II who gave him a "lac'd hat" and a commission to "kindly use and relieve such straggling Englishmen as should chance to come that way".
The Miskito king, Edward, concluded a formal treaty of friendship and alliance with Britain in 1740 and subsequently the British and the Miskito cooperated in attacks on Spanish settlements. From 1742, King Edward allowed the British to establish plantations and settlements in Miskito territory and several hundred Englishmen with thousands of their African slaves lived there by 1786. Although the Spanish were unable to dislodge the British from the Mosquito Coast during the American War of Independence, by the 1786 Convention of London the British evacuated their settlers from the territory to Belize.
From 1787 the Spanish brought settlers from the Canary Islands to The Mosquito Coast but the attempted colonisation was not successful and the Miskito King George II attacked and liberated the town of Bluefields in 1797 and expelled the Spanish from the rest of his territory in September 1800. With the wars of independence against the Spanish in the second decade of the 19th century, the Miskito renewed their alliance with Great Britain and their kings travelled to Belize for their coronations, the first being King George Frederic Augustus in 1816. In 1844, the Miskito agreed to the establishment of a formal protectorate by the British although this was opposed by The United States, Nicaragua and Honduras. The Americans feared that the British would dominate the building of a canal across Central America and almost went to war with Great Britain when, in 1848, the latter seized San Juan Del Norte which they renamed Greytown. The Americans bombarded Greytown in 1854 but after negotiations, Britain passed on its protectorate of The Mosquito Coast to Honduras.
This was against the wishes of the Miskito who consequently staged a revolt and as a result the British made an agreement with Nicaragua which transferred the suzerainty of The Mosquito Coast to that country. Nicaragua recognised the sovereignty of Colombia over Providencia and the other San Andres Islands in 1928.
During the period of British domination, The Mosquito Coast flew a flag from 1834 to 1860 and this is depicted at the top of this blog. As regards its postal service, Greytown was included in the Royal West Indian Mail Steam Packet Company's network from January 1842 as part of the Jamaica District. This arrangement was discontinued in September 1842 but mail packets called at Greytown again by November 1844. The Greytown office increased in importance when gold was discovered in California and the first distinctive local postmark was used from February 1856. An agency which did not have its own postmark operated at Bluefields from 1857 to 1863. The first handstamp, which was in red, is featured in Stanley Gibbons Catalogue and depicted below:- 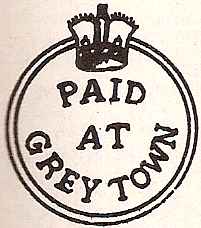 A circular postmark was introduced at Greytown in 1864:- 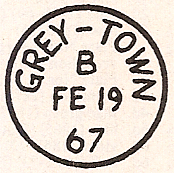 and a third obliterator postmark was used from 1865 at the British postal agency in Greytown with the number C57 in horizontal format applied to contemporary British adhesive stamps which were introduced there in 1865. However, adhesive stamps were only used for one year. From 1875, a fourth postmark was used which combined a small circular date mark with a vertical C57 obliterator cancel for use on reintroduced contemporary British stamps in denominations from a halfpenny to 10 shillings:- 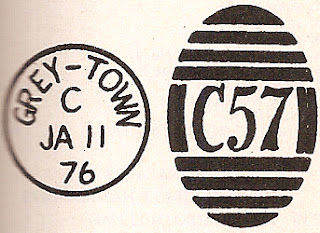 The British post office in Greytown was closed in May 1882 when Nicaragua became a member of the Universal Postal Union. Thus ended Britain's philatelically relevant links with one of its more little-known territories.