200. Some Interesting Recent Mauritius Stamps And Yet More Post And Go. 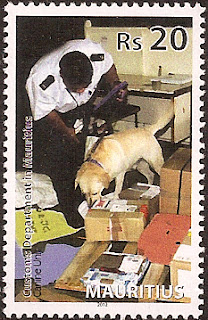 I recently moaned about new issues from Mauritius and wondered if they might be the most boring stamps currently being issued by any country in the Commonwealth. Nitish Peechen, the designer of some recent Mauritius stamps, kindly replied in a comment on the blog dated 10 September 2012 and rightly points out that the designer is very much subject to the vagaries of what the people on national stamp committees want to see both in terms of design and subject matter. Mauritius has been very pleasingly conservative in terms of the new issues produced every year as well as the modest face value of their issues. Unfortunately the subjects featured on the stamps have also been very conservative and included such thrilling depictions as a collection of tea-bags and some water being poured from a kettle into a cup. These designs are not the designer's fault but the choice of those who finally approve the stamp to be issued. However, I have to say that I do have a few favourite designs which have recently appeared from Mauritius. The above stamp from the 2012 Customs Department set which features a labrador retriever hard at work sniffing out undesirable substances was bound to be a winner with me and finds its way straight into my collection of "labradors on stamps" stamps.
I was also interested in the recently issued stamp which commemorates the 40th anniversary of China-Mauritius diplomatic relations not because it is a particularly good design but because of the subject - I have pointed out before the number of countries which in recent years have issued such stamps and this is another to add to the growing number of issues which illustrate the in-roads that The People's Republic is making in its international influence:- 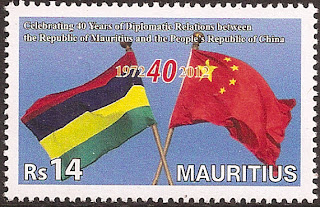 Perhaps the best set of 2012 from Mauritius was that which was released on 25 June and commemorated the bicentenary of the Mauritius Turf Club - the most colourful and lively designs were those of the Rs7 value and the Rs50 miniature sheet:- 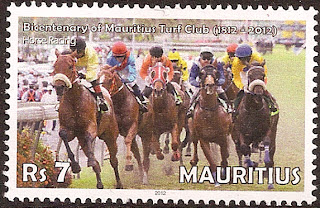 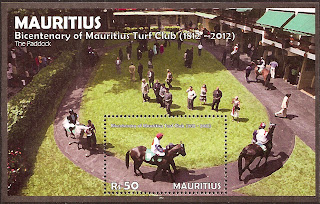 Royal Mail, straining to limit itself to 12 commemorative sets per year has found a way around to this stricture, by producing stamps which it clearly does not think are real stamps - "Post And Go" machine-printed stamps. There were two further issues to add to the albums of a collector of British stamps when Royal Mail opened a temporary ("Pop-up") post shop at Staples Market in Camden in London on 16 November 2012 which stayed open until 24 December. Two "Hytech" machines were installed at the temporary shop (machines A3 and A4) and the stamps depicted below were digitally printed by them. It is necessary to obtain these items because they represent the first Hytech printing of all the values of the Robins stamps and the first Hytech printing of the 40g Worldwide Machin head value (although it has been produced previously with added inscriptions such as the previously featured "Perth 2012" issue and the Spring Stampex Diamond Jubilee issue):-

The theme for the pictorial Post And Go issues in 2013 will be "Pond Life" and the first issue will be made on 20 February 2013 to coincide with Spring Stampex 2013. As well as the machine-produced stamps, the stamps will also be sold in a pack of 6 designs as depicted below:- 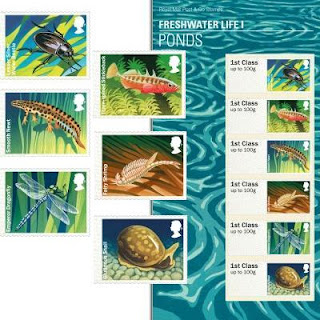 On the same date Royal Mail will also issue 2 additional "Post And Go" stamps in the form of Second class values (produced for the first time) - for small items of mail and also for the larger size. They will also be released at Stampex and the basic design is printed by Walsall Security Printers with one phosphor band applied:- 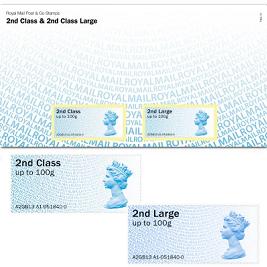