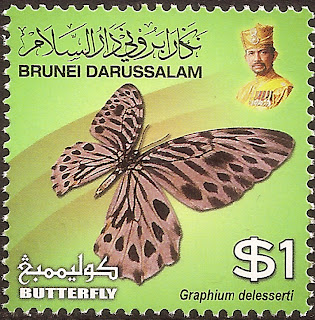 During 2012, though I do not yet know the exact date of issue, Brunei Darussalam issued an attractive set of 3 stamps and a miniature sheet which was titled "Butterfly Series 1" which presumably depicts local butterfly species and, judging by the "Series 1" inscription, is the first of a number of more such issues:- 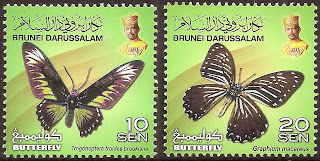 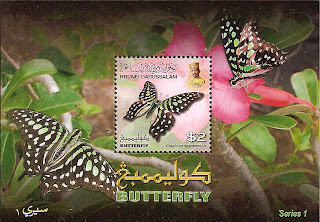 The 2013 Indian Children's Day stamp had a highly original theme, that of the post office of the year 2050. The rather crowded design appears to depict technology which will be used by a post office in 38 years time and appears to suggest that people will still write ordinary letters, put them in envelopes and stick a postage stamp on them. Somehow, I don't see it myself - surely communication will be entirely electronic by then and the postage stamp will be a paper equivalent of a dodo. As for philatelists, surely they will be antiquarians in 2050 rather than the obsessional victims of greedy postal administrations which we are at present. I think that the originality of the theme makes this an excellent stamp especially as it celebrates postal history, albeit it future history. 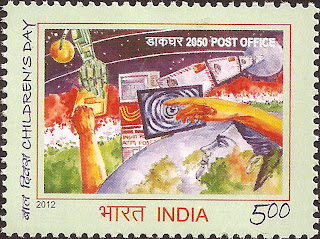 Another branch of history - military history - was commemorated by India in 2012 by the issue of a single stamp commemorating the Scinde Horse Regiment:- 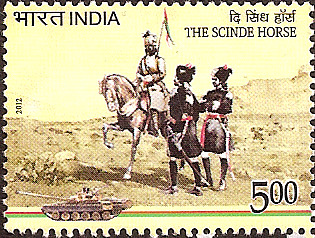 Gibraltar has announced its first issues of 2013. On 30 January 2013, four stamps and a miniature sheet will be released to commemorate the 60th anniversary of the coronation of Queen Elizabath II:- 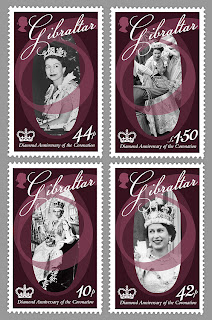 Really the designs are not terribly interesting and of course the miniature sheet must be have a high face value - £3:- 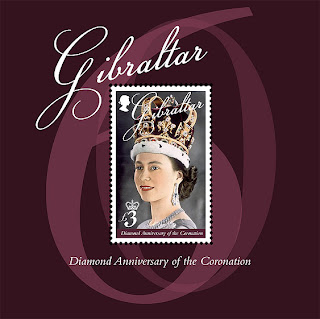 At least the Coronation stamps are relevant to Gibraltar. Another issue to appear on 30 January will be a pair of stamps to commemorate the Year of the Snake. I do not know what percentage of Gibraltar's population originates from east Asia but I suspect that any such population there is rather small so why Gibraltar needs to commemorate the Chinese new year is a mystery. At least the set is modest - just 2 stamps costing a total of £1.42p:- 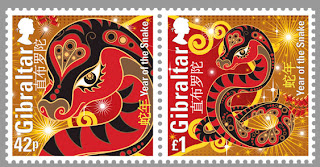 The stamps are issued in sheetlets of 10 (5 of each design) and although the basic pair of stamps seems modest, the Gibraltar Post Office has come up with a little trick in which they have also produced a "gold miniature sheet" to accompany this issue which is only available to the collector if he buys a £19.99 souvenir pack which contains the miniature sheet, a sheetlet of 10 stamps and a basic pair for good measure. The gold miniature sheet, not available separately, is produced in a limited quantity of 2013 sheets making it hopelessly alluring to the completist collector of Gibraltar stamps who must buy what amounts to 11 sets of the basic stamps (remember, that means buying 11 x £1 stamps) to obtain a single miniature sheet. O dear! But don't worry, the circumstances of issue of this miniature sheet mean that, even if it has postal validity, it is a "collectable" and not a postage stamp and can be safely avoided by people who collect postage stamps and that's £20 they don't need to spend to ensure that their collection remains complete. To paraphrase an old saying, "Everything that glisters is not...a stamp". 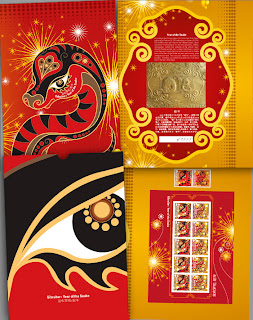 Meanwhile, Namibia has published a list of its planned issues for 2013. Namibia has one of the sanest new issue policies and produces some of the very best stamps in The Commonwealth. The subjects of the stamps are always relevant to Namibia, as are the designs of the stamps which usually feature art work of the highest quality and which are usually produced by a small group of artists and designers. The programme for 2013 is:- 1 March: definitives, new values (5 stamps), 5 April: Beetles (5 stamps), 17 June: Namibian children (6 stamps and a miniature sheet), 20 June: Environmental education (1 miniature sheet), 12 July: Transport by donkey cart (1 m.s.) and 30 September: Large antelopes (3 stamps). All the stamps are beautifully illustrated by the artist Helge Denker who has been responsible for some classic Namibian stamp designs in recent years. Some of the 2013 stamp designs will also be classics (especiallyy the donkey cart issue) and continue to keep Namibia in the highest rank of stamp-issuing countries of The Commonwealth. Highly recommended.
One point of note is that the Namibia programme does not mention a 4th SAPOA issue which we might have expected in 2013, there having been 3 previous such issues in 2004, 2007 and 2010. Nor have I seen any post offices of the other SAPOA countries suggesting that they will make such a stamp issue in 2013. Time will tell.
Posted by White Knight at 03:41