195. Line Up Here To Join The Commonwealth.

An article published in June 2012 announced that Surinam, the former Dutch colony in south America, was to apply to join The Commonwealth and would "soon be a member". It was felt that a good case could be made for doing so because of the country's close links, especially in trade, with the Commonwealth countries of the Caribbean area. The case could also be made because the country has twice been ruled by Britain in its history, albeit rather a long time ago. 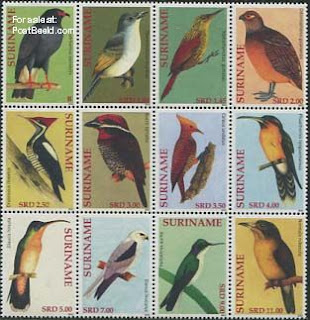 In 1630, English colonists led by Captain Marshall attempted to settle in the area and in 1650 the Governor of Barbados, Lord Willoughby, sent vessels and guns to support the colony and went there himself 2 years later. The colony name became Willoughbyland but on 26 February the territory was attacked and captured by 7 Dutch warships. On the 31 July 1667, the British and Dutch signed the Treaty of Breda whereby the Dutch held on to the now-renamed Surinam and the British held on to the former Dutch territory of New Amsterdam, which was renamed New York. The British recaptured Surinam later in 1667 but lost it for good in 1668 with a final settlement of the territory's fate being recognised by the Treaty of Westminster, signed in 1674. This previous history is one of the reasons put forward for Surinam being allowed to join The Commonwealth and I suppose it is fair enough as the country was actually founded by Englishmen. Commonwealth stamp collectors will have something of a challenge if the country joins the organisation as its new issues are often not modestly priced - the above issue featuring birds, released in  2012, is currently being sold by the Surinam Post Office for 24.05 Euros and new issues are not infrequent.
It was also announced in the press in autumn 2012 that the former German and Belgian colony of Burundi was applying to join The Commonwealth. The country may adopt English, following the actions of its neighbour, Rwanda, as one of its official languages and is the only member of the East African Community which is not a member of The Commonwealth. Its former constitutional links with Rwanda give added weight to Burundi's application for membership. For Commonwealth stamp enthusiasts, Burundi is another slightly daunting prospect as its philatelic agent is Stamperija, based in Lithuania. In recent years it has issued a number of large sets depicting foreign celebrities and wildlife but there have also been some interesting issues of local relevance including 3 stamps and a miniature sheet which depict gorillas and monkeys of Burundi, issued in 2011:- 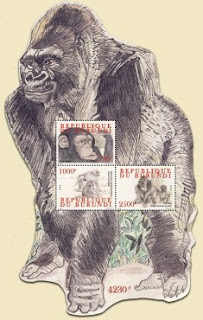 and a set of 11 stamps and an accompanying miniature sheet which depict the 11 presidents who have ruled Burundi since its independence which was granted to it by Belgium on 1 July 1962. The set was issued in 2012 to commemorate the 50th anniversary of independence:- 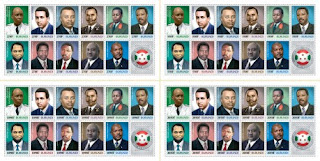 Some of the issues which have the typical appearance of products arising from Stamperija at least have a local relevance such as a sheetlet of 4 stamps and a miniature sheet issued in 2012 to depict the Royal drummers and dancers of Burundi:- 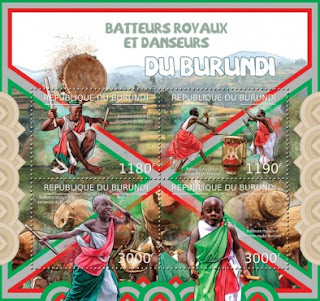 Burundi and Surinam therefore join a growing list of countries which have applied to join The Commonwealth, including Algeria, Madagascar, South Sudan, Yemen and Sudan, some having more chance of realising the goal of membership than others. It is thought possible that Zimbabwe may be readmitted to membership of the organisation in the near future.
One of the reasons former French territories wish to join The Commonwealth is that they see English as a more useful resource on the international scene and French as a language going nowhere. Some also say that applications to join the Anglophone organisation are meant as a slap in the face to the French when the governments of some of the countries fall out with the French government. The government of Gabon dealt a major blow to French esteem in October 2012 when it dropped French as the official language of Gabon and introduced English as its replacement. In the week before the summit of La Francophonie which was held in Kinshasa in 2012, the President of Gabon was in Rwanda, The Commonwealth's most recently admitted member, to learn how that country had changed to English and revolutionised its communications and education with the use of English as a basis for this change. Some French commentators felt that the changes in Gabon were more to do with the French judiciary's investigation of the Gabonese president's family's finances than anything else. Will we see Gabon's eventual application for Commonwealth membership? For Commonwealth stamp collectors that would be less problematical since, despite using Stamperija as its philatelic agent, Gabon seems to have a highly conservative new issue policy with just 1 issue being released in 2011, a commemoration of "International Widows Day"- 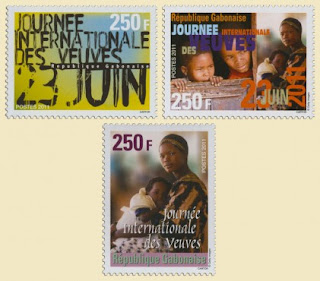 and, in 2012, the issue of  2 stamps to commemorate the holding of the Africa Nations Cup football competition jointly by Gabon and Equatorial Guinea:-

Presumably, with the change in its official language we will see future new stamps from Gabon being inscribed in English rather than French.
It will be interesting with the holding of CHOGM at the end of this year to see if progress is made with any of these membership applications, especially South Sudan, and to see if anyone interested in collecting the stamps of The Commonwealth will soon have the stamps of new territories to add to their collections.