The 2012 issues for the British Antarctic Territory were released on 21 December 2012. They consisted of a miniature sheet which depicted HMS Protector:- 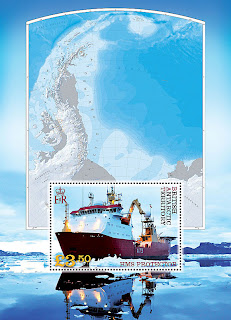 The issue was designed by CASCO and printed in lithography by BDT International. Also issued on the same date were 10 stamps, with the same designer and printer, which depict glaciers and ice sheets of the territory:-

and again on the 21 December 2012, 8 stamps and a miniature sheet were released to commemorate the 75th anniversary of the British Graham Land Expedition (also designed by CASCO and lithographed by BDT):- 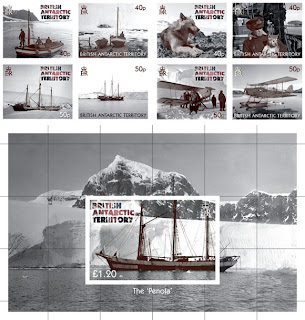 Previously, on a date in the middle of November 2012 (not yet precisly known), 5 stamps were released which depict penguins of the territory:-

It's surprising where one can obtain information about new stamp issues which does not actually make it to the ordinary philatelic press. I have just found a review on the website Tripadvisor about the Paro post office in Bhutan and the philatelic bureau located there. One of the reviewers describes the facility there for the production of personalised postage stamps, a post office assistant is available to take a photograph of the customer (most likely a tourist) which is then produced as a sheet of 12 stamps for the tourist to use on their mail to send back home. One of the reviewers includes a photograph of their personalised sheetlet - produced to commemorate the wedding of the King of Bhutan as mentioned in a recent blog:- 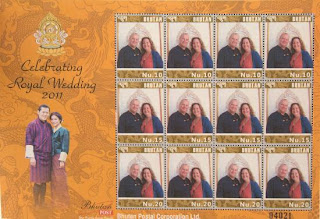 This is clearly a tremendous souvenir for visitors to the country and the individual stamps are wonderful items to stick on one's postcards to people back home. Full marks to the Bhutan Post Office.
Vanuatu appears to have ended its 2012 stamp issues with 2 more commemorative sets (date of issue not yet known). There is a pair of stamps which commemorate the work of the Red Cross in Vanuatu:-

Four greetings stamps have also been issued by Vanuatu and, rather like the Bhutan personalised stamps, look like attractive items for a visiting tourist to use on their mail back to their home country:-

Finally to the South Atlantic area and issues announced by Pobjoy Stamps. Tristan da Cunha will issue 4 stamps on 14 February 2013 to commemorate the Tristan Song Project which is a collaboration of schoolchildren in Tristan Da Cunha and children at a school in Norfolk, England, whereby poetry by the Tristan children is set to to music by the English children. The designs feature lines from the songs, which are the intriguingly-named "When Fish Got the Flu" (35p), "Rockhopper Penguin" (45p), "The Volcano Black" (70p) and "The Molly" (a local name for an albatross) (£1.10 value). The designs, by Andrew Robinson, which depict the words plus a musical instrument are a little dull given the wonderful titles of the songs, perhaps a pictorial interpretation of the subjects of the titles may have more interesting. The stamps are printed in lithography by Cartor.

There will be a historic stamp issue from The Falkland Islands on 15 February 2013 to commemorate the holding of a referendum by the people of the islands as to whether they wish to continue being ruled as citizens of an Overseas Territory of The United Kingdom. Hopefully, their right of self-determination will be recognised by the United Nations just as the organisation insists on a similar right for other peoples of the world and if the Falkland Islanders decide that they wish their home to be a British Overseas Dependency, then the rest of the world will accept this. The Referendum will be held on 10 - 11 March 2013. These stamps are also designed by the busy Andrew Robinson and lithographed by Cartor.