Although 2012 is now behind us, there are some residual items to mention from the big issues of the year - the Queen's Diamond Jubilee and the London Olympic Games. Stamperija has released the designs of a sheetlet of 6 stamps and a miniature sheet to celebrate the Diamond Jubilee:- 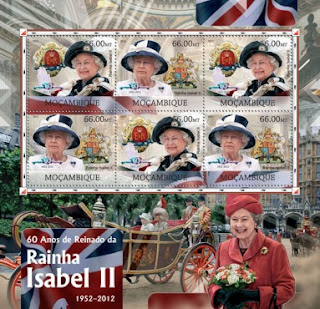 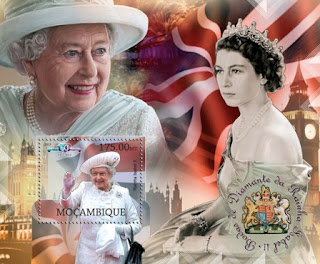 This subset was issued as part of a series entitled "Anniversaries part 3" with an issue date given as 30 June 2012. Most of the issue, as usual, is irrelevant in subject matter to Mozambique itself though you may think that as a member of The Commonwealth, the diamond jubilee of the Head of The Commonwealth is a subject worthy of commemoration by Mozambique. Other subjects in this set are also commemorated with 6 stamps and a miniature sheet and are:- 180th anniversary of Edouard Manet, French artist;  Liu Yang, first Chinese female astronaut; Birth centenary of Paul Jackson Pollack, American artist; Mohandas Gandhi, Indian statesman (bizarrely the stamps do not depict Gandhi himself but the British actor, Ben Kingsley, in the role of Gandhi in the movie of that name); "Peacemakers" (including Pope John Paul II, Kofi Annan and so on), Elvis Presley, American musician; Death centenary of Hubert Latham, aviator; the Kruger National Park, South Africa and an issue which may have some relevance to Mozambique; the 50th anniversary of the Pan African Women's Organisation:- 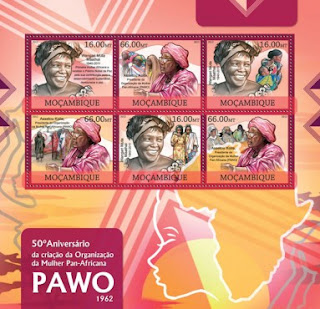 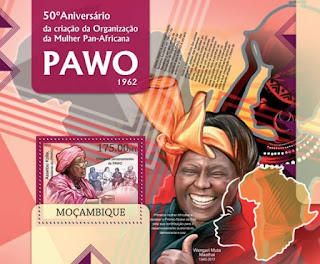 Meanwhile, another Commonwealth country, Cyprus, issued a single stamp on 7 November 2012 to commemorate an Olympic medal winner - Pavlos Kontides who won a silver medal in one of the sailing events. Cypriots were very proud that a representative of their small country had achieved such a sporting success:- 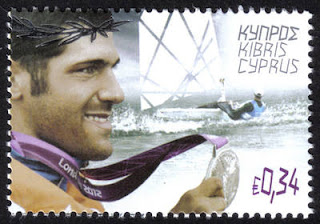 I also like Cyprus' Christmas stamps which were released on 14 November 2012 and which have depictions of the Madonna and Child:- 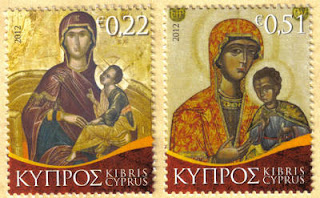 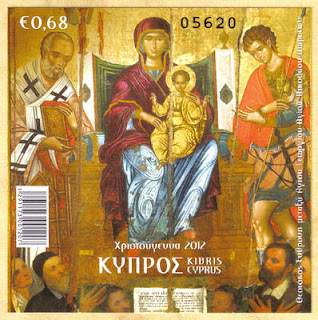