Although Hong Kong returned to Chinese sovereignty in 1997, the territory's stamps had long been a feature of a collection of Commonwealth stamps for the many years that it was a British colony.  Since Hong Kong returned to China, I, like many other people, have continued to collect the territory's new issues. Generally they are extremely well designed and printed and always of relevance to Hong Kong. Recent new issues include:-
22 November 2012: Insects: 6 stamps and 1 miniature sheet:- 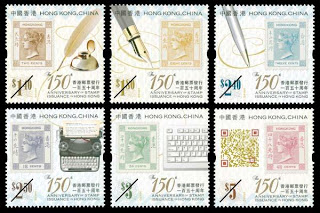 1 November 2012: Signs of the western zodiac: 12 gummed stamps and a miniature sheet containing all 12 stamps plus all 12 values produced as self-adhesive stamps in both booklet and coil formats:- 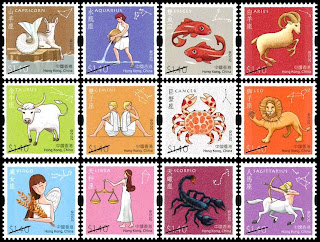 On 21 February 2013, Royal Mail will release its second commemorative issue of the year in the form of 6 stamps which will mark the bicentenary of the publication of "Pride And Prejudice" by the authoress, Jane Austen. As well as featuring a scene from Pride And Prejudice itself, the set will depict scenes from Austen's other novels:- Sense And Sensibility,  Mansfield Park, Emma, Northanger Abbey and Persuasion. The art is by Angela Barrett and the design by Webb and Webb:- 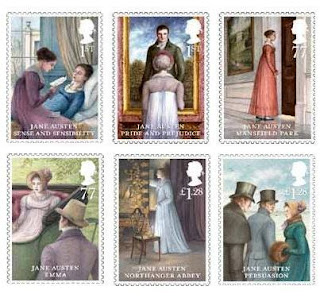 This is the second British set dedicated to Jane Austen - four stamps were issued on 22 October 1975 to commemorate the bicentenary of the authoress's birth and these, designed by Barbara Brown, also depicted scenes from Austen's novels: Emma, Northanger Abbey, Pride And Prejudice and Mansfield Park. Perhaps it would have been pleasing to include a portrait of Jane Austin herself in this year's set rather than repeating the previously used "scenes from novels" concept.

Meanwhile there has been a further issue to commemorate the Dickens bicentenary - 4 stamps issued by Pitcairn on 5 December 2012 and all depicting portraits of the author, at various stages of his life:-

The designs were by Denise Durkin and the stamps were printed in lithography by Southern Colour Print. Pitcairn also issued 2 sheetlets on 31 October 2012 which depicted the endangered Fluted Giant Clam and the WWF logo. One sheetlet consisted of 2 se-tenant strips of the 4 different designs which comprise the set and the other consisted of 4 se-tenant strips:- 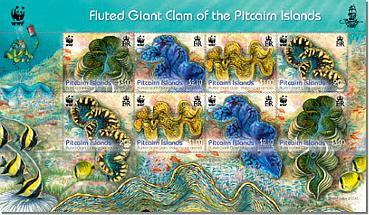 Another interesting set from the Pacific area are the 4 stamps issued by Vanuatu on 31 October 2012 to commemorate the partial eclipse of the sun which was visible from the country:-