204. Sixtieth Anniversary Of The Coronation. 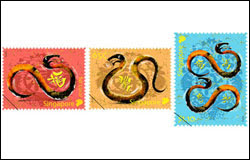 Singapore's first issue of 2013 was released on 4 January and took the form of the usual lunar new year set consisting of 3 gummed stamps from ordinary sheets (above), a Collectors sheet (below):- 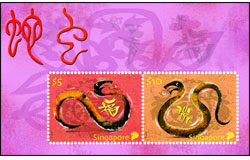 and a sheetlet of 10 self-adhesive stamps at the first local rate:- 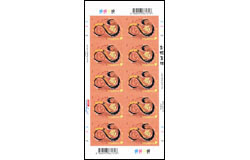 I enjoy collecting the Singapore new year stamps which are always colourful and amusing and are at least appropriate to the country unlike some of the lunar new year stamps which appear from countries such as Gibraltar and Grenada (both illustrated in recent blogs). The collector's sheets are of course controversial since they are sold at a price higher than their face value and for this reason are not usually given full catalogue status by Stanley Gibbons Catalogues although the editor of the Catalogues does not see this as a reason to exclude Royal Mail prestige booklets from the catalogue even though they too are sold at a price above the face value of the stamps contained inside. A highly inconsistent publication. Singapore issued 2 stamps on 27 November 2012 with the same designs as a pair released by Brunei, as a joint issue. A miniature sheet was also produced:- 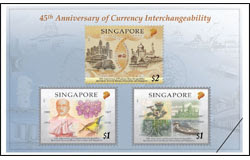 A set of 8 stamps was also produced by Singapore on 17 October 2012 which commemorated various festivals held there and the 4 1st local values were also produced in a self-adhesive format, each in a booklet of 10 stamps making 4 booklets in all. Another Collector's Sheet was also issued, again very colourful and attractive, and is depicted below with the folder in which it was issued:-

I have previously mentioned the stamp issues due to appear on 6 February 2013 from  Ascension and Bahamas, both client territories of Pobjoy Stamps, and below, I depict the miniature sheets which the territories will issue which accompany the sets of 5 stamps which will be released on that date:- 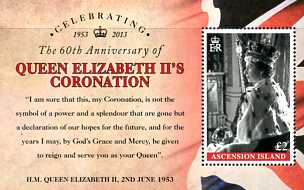 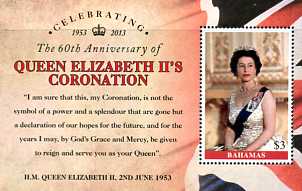 For decades, royal anniversaries were commemorated by numerous territories participating in various omnibus series which we thought of as "Crown Agents' omnibus issues" but as CASCO, the Crown Agents' successor, appears to gradually fade away and lose its client territories to Pobjoy Stamps. I wonder if we will call such omnibus issues "Pobjoy Omnibuses" in the future. Having said that, these particular issues have in fact been designed by CASCO rather than Pobjoy's usual designers and I suppose similar designs will appear from some of the residual CASCO territories, although CASCO's publicity is so poor that I have not yet seen any information which confirms that.
I find it quite difficult to keep up with the issues of the Malaysian Post Office but there have been some interesting and attractive items recently. I like the postal history-themed issue which appeared on 22 October 2012 which consisted of 3 stamps and a miniature sheet and which depicted postmen's cycle transport, one of which is illustrated below:-

Like Singapore, Malaysia also issued stamps for local festivals on 27 September 2012 and the issue consisted of 5 stamps:-

Finally, I depict the 2 Brunei stamps issued on the 27 November 2012 as its part of the Brunei-Singapore Joint Issue mentioned above. One of each of these stamps appeared in a booklet produced by the Brunei Post Office which consisted of a small card folder with the stamps stuck into the booklet by the selvedge from the edge of the stamp sheet.