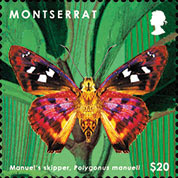 Montserrat is to issue a new 16 value definitive set which will feature moths and butterflies of Montserrat. It is a pleasingly colourful and attractive set but will hopefully not be accompanied by miniature sheets and sheetlets, such as has happened in Penrhyn recently and as discussed in the previous blog. I do not yet know the date of issue of this set.

Other forthcoming new issues include 2 sets from Antigua And Barbuda, one of which commemorates the European artist, Raphael, and comprises a sheetlet of 4 stamps and a miniature sheet. There is nothing in the design of the stamps to demonstrate any link between Raphael and Antigua, presumably because there is not any, and therefore one questions why this issue is being made by the Antigua And Barbuda Post Office. Similarly, there appears to be no connection between this island Caribbean state and the late American entertainer, Elvis Presley, but Antigua's Post Office is issuing no less than 5 miniature sheets on the theme of Presley's "Classic Hits" in the near future
.
Grenada is to issue a sheetlet of 3 stamps and 1 m.s. which depict shells of the Caribbean region, but not specifically of Grenada itself, and a set of 4 stamps and 1 m.s. which depict butterflies, again of the Caribbean region rather than of Grenada itself:-

Meanwhile the Grenada Post Office also issued, on 3 January 2013, stamps which ostensibly are for use in the Grenadine islands of Carriacou and Petite Martinique and which comprise 6 miniature sheets which, similar to those from Antigua, commemorate the "classic hits" of Elvis Presley. There is also a sheetlet of 4 stamps and 1 m.s. which belatedly commemorate the centenary of the sinking of the Titanic, and 10 stamps in 2 sheetlets and 1 m.s. which depict whales and dolphins of the Caribbean area, again not specific to Grenada waters:-

I suppose you could say that the depiction of marine mammals of the Caribbean area is of some relevance to Grenada but the music of Presley and the sinking of the Titanic clearly are completely irrelevant to the island and its offshore appendages. Nevis is to issue a set of 4 stamps in sheetlet format plus 1 m.s. which depict beetles, whether or not any of the featured species are found on the island is a question not answered by the designs:- 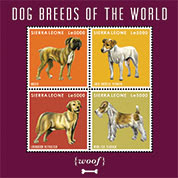 None of these issues produced for Sierra Leone have any direct relevance to Sierra Leone though it is possible that some of the carnivorous plants may be present in the country (again, the design does not tell us) and - who knows? - someone there might own a labrador dog or a Jack Russell terrier (though when I visited Sierra Leone none of the dogs I saw there looked like any of these breeds) so I doubt if any of these stamps will find their way into my Commonwealth collection. As I'm forever writing, I collect stamps which mean something to the country whose name appears on them and hardly any of the stamps mentioned above, apart from the Montserrat butterflies definitives, have any real relevance to the countries for which they have been produced. Really, it would not be that difficult for designers to make their stamps more representative of their client territories - just a little research, that's all it takes -but why bother when there are thematic collectors out there who are ready to spend money on anything that depicts their subject of interest even if the country that depicts the subject has no links with that topic?
Posted by White Knight at 03:30