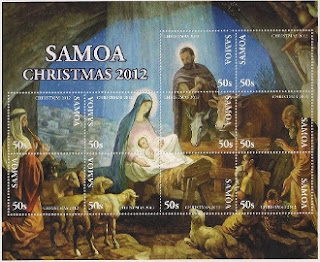 One of the New York-based philatelic agencies, Philatelic Collector Inc., has established itself as the "exclusive agent, advisor and distributor for all philatelic Material" for Samoa. This is the third philatelic service of a Commonwealth country of the Pacific region to be taken over by this company since it took over control of the stamp issues of the Cook Islands in 2010. At the end of 2011, Tonga too fell under its control and during 2012 a large number of stamp issues, frequently of very high face value, were released with the names of Tonga and one of its constituent islands, Niuafo'ou, printed on them. Cook Islands, too, has had a large number of stamps issued for it in the last two or three years and the numbers of such issues have been increased by stamps released with the names of Penrhyn, Aitutaki and Rarotonga, all constituent islands of the state of Cook Islands, printed on them.
A feature of the takeover of stamp issues by this company so far has been the release of a new definitive series for its client territories soon after it has taken over the release of new issues and these seem to be invariably accompanied by sheetlets which contain all the values of the definitive stamps which have been produced in ordinary sheets and, recently in the case of Penrhyn, additional miniature small sheets which also contain all the stamps of the set and so make up a third version of the complete set (hence completeist collectors are faced with buying not one set of definitives but three). I suppose we must expect a new definitive series which has been produced for Samoa to appear on the market in the near future. Meanwhile, a Christmas set was rushed out for release on 21 December 2012, which was a little late for use on Christmas mail; Philatelic Collector Inc. having been appointed agents for Samoa only on 26 November 2012.
The Christmas item was actually not a set but a sheetlet of 10 stamps, admittedly each modestly priced at 50c, but of lazy design - a photograph of a religious painting with 10 stamp-sized perforated shapes in it - look at the illustration above, some of the designs of the individual stamps within the sheetlet are ridiculous, the top right design for instance depicted nothing more than a small piece of an arch - if you received that on Christmas post you would wonder what was going on.
So, just as we did with Tonga last year, we collectors of Commonwealth Pacific area stamps must have our anxieties about what this agency will produce during 2013 in the name of the Samoa Post Office. By the end of 2012, Tonga, following what had happened in The Cook Islands, had fully realised our worst fears and had produced a highly expensive range of new issues during the year. I fear that the Pacific area is becoming close to uncollectible what with another New York-based agency continuing to produce stamps frequently with highly irrelevant subject matter for its client territory, Tuvalu, and the excessive new issues being produced in the name of The Solomon Islands by a Lithuania-based agency. A pity but that's stamp collecting in 2013. It is up to the individual collector to decide what he or she wants to spend their money on and to avoid being exploited. Catalogue editors have a role to play too if they have the backbone to decide that they will not list exploitative issues - their influential position means that they have a duty to the collector and to the hobby but sadly there has been little evidence to suggest that editors are prepared to do much to help collectors fight back. Let us hope that the Samoan Post Office is able to restrict issues more than the post offices of some of their neighbours have been able to do.
Posted by White Knight at 01:04