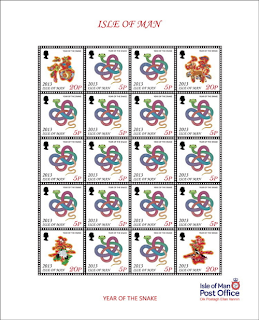 Despite already having announced several new issues for the beginning of 2013, detailed in a previous blog, the Isle Of Man Post Office has been unable to resist the release of 2 further catch-penny items to coincide with the China International Collection Expo and celebrating an event clearly of great importance in the Isle Of Man - the Chinese New Year. Not content with a stamp issue the Manx Post Office felt that the event was so important to this small island which sits in the middle of the Irish Sea - a long way from the far east - that a miniature sheet of 6 stamps (below) was required to do justice to the Manx celebrations of the festival this year and even that was not enough as a further sheetlet of 20 stamps was also required (above). I look forward to hearing about what must clearly have been exuberant celebrations in the middle of Douglas, the Manx capital, to celebrate the festival. Or not, as the case may be. The date of issue was 8 February 2013.

Meanwhile a territory where such an issue is much more appropriate is, of course, Hong Kong where the Chinese new year commemoratives were released on 26 January 2013. There was a set of 4 stamps (above), a miniature sheet:-

Perhaps it all adds up to rather more than I should like to see but the various items are at least relevant to Hong Kong and are extremely well-produced and attractive, as are most stamps from the territory which is why I still collect the issues of Hong Kong even though it ceased to be a British territory more than 15 years ago. The issues of Hong Kong give the stamp collector continuing great pleasure which is more than can be said for some territories still in The Commonwealth. The second issue of the year from Hong Kong is a set of four stamps and 1 miniature sheet which was released on 28 February 2013 to commemorate the 150th anniversary of the International Red Cross Committee:- 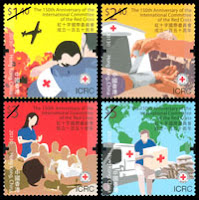 The latest Commonwealth WWF stamps have been produced for The Solomon Islands and are clearly products of the Lithuanian stamp agency, Stamperija, and are very attractive and according to the WWF Stamps website are only being sold in the usual sheetlets of eight (2 of each stamp) or as 4 se-tenant strips in sheetlets of sixteen. Whether or not Stamperija will come up with additional variations, such as imperforate stamps, remains to be seen. The stamps which depict the Solomon Islands cockatoo were designed by Vyautas Svartis. The date of issue is not yet known. 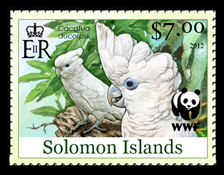 At long last, an issue from The Turks And Caicos islands which has direct national relevance - a miniature sheet released to celebrate the 20th anniversary of the Turks And Caicos National Trust. The design features a replica built in 2007 of an old slave cabin in the Cheshire Hall plantation ruins. Now if only the territory would issue more stamps which celebrate its national heritage rather than on subjects which have more to do with US popular culture than Turks And Caicos culture. I do not yet know the date of issue of this item. 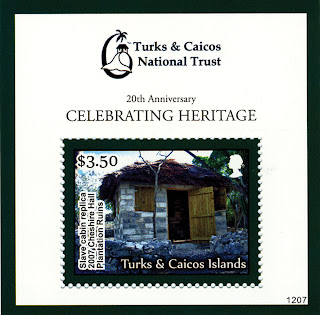