208. Abdication Of The Pope and British Footballers. 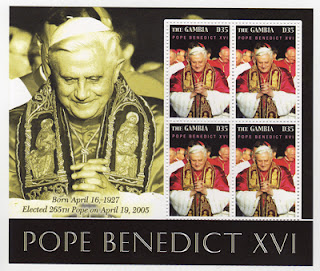 During a rather short pontificate various Commonwealth countries have depicted Pope Benedict XVI on a large number of issues, mostly produced by a large New York-based philatelic agency on behalf of its client territories. Many of the issues have commemorated papal visits abroad and in the last few years the agency has produced stamps with the names of its clients printed on them even though the stamps have commemorated visits of Pope Benedict to countries often thousands miles away from the country for whom the stamps are issued. Issues celebrating papal events are clearly popular and apparently are still a good source of income for the philatelic agency and so in the next few weeks we will no doubt expect a huge outpouring of issues commemorating the outgoing pope, the interim vacant see and the installation of the next pope whoever that will be. The nonsense of such issues is illustrated by the item depicted above - a miniature sheet produced with the name of The Gambia printed on it which was released on 15 November 2005. Why do I say that it is a nonsense? Well, The Gambia is a small country where Christianity is very much a minority religion - 90% of Gambians are Sunni Muslims - and of the 9% of the population that is Christian, there are only about 43000 who are Catholics. Yet, in recent years The Gambia has had stamps with its name printed on them produced for it which not only celebrated the start of Benedict XVI's papacy as shown above but which have commemorated his various birthdays, anniversaries of his succession and trips to foreign countries. These stamps do not seem to honour the Pope but merely to cynically exploit him and the collectors who spend large amounts of money buying them. I wonder how many of these stamps ever found their way on to a letter in that largely Muslim country. There is much speculation that the next Pope may be from Africa, Nigeria or Ghana, and if that happens I would certainly understand that various African Commonwealth post offices would want to philatelically commemorate such an event.
On the subject of cynicism, Royal Mail, the British Post Office, has found new ways of getting around their announcement that they would reduce the number of sets of stamps issued per year - first of all, as previously pointed out, by issuing increasing numbers of "Post And Go" stamps, particularly in limited numbers at various philatelic exhibitions, and then by simply issuing increased numbers of stamps per set. Thus, we find that 10 more stamps will be issued on 16 April 2013 to commemorate "Great Britons", some greater than others. The designs feature Norman Parkinson, a photographer, Vivien Leigh, the movie actress who famously appeared in the film "Gone With The Wind", Peter Cushing, a movie actor who played Sherlock Holmes, Dr. Frankenstein in the Hammer horror movie series, a villain in "Star Wars" and who is also the missing "Dr. Who", having played the role in 2 movies of the 1960's (this stamp is thus added to the 11 "Dr. Who" stamps to be issued on 26 March), David Lloyd George (as a former prime minister, he is one of the truly "A List" "Great Britons"), Elizabeth David, a writer about food, John Archer, the first Afro-Caribbean man to hold British public office, Benjamin Britton (composer, another "A List" commemoration), Mary Leakey, archaeologist and anthropologist and Richard Dimbleby who was a television broadcaster. History will not remember most of these people but in 200 years time someone may find an old stamp album and wonder who they were.

And then, Royal Mail is also going to produce another set of 11 stamps which commemorates the 150th anniversary of the Football Association (in England) and, so as not to offend the Scots, the 140th anniversary of the founding of the Scottish Football Association. The issue takes the format of a miniature sheet with 11 different stamps each depicting a portrait of a member of a United Kingdom "Dream Team". Actually, I have to say that I think that it is a very good issue and should be equally as popular as the Dr. Who set among the general public of Britain. The footballers depicted were all chosen from players whose senior careers peaked in the period 1963 to the 1990's and the featured players are:- Jimmy Greaves, John Charles, Gordon Banks the goalkeeper, George Best, John Barnes, Kevin Keegan, Denis Law, Bobby Moore (England's captain of the team that won the 1966 World Cup final), John Robson, Dave Mackay and Bobby Charlton (who also played in the 1966 World Cup winning team).

Of course, like the Dr. Who set, this is too good a money-making opportunity for Royal Mail to miss and so they have been unable to restrain themselves from also issuing yet another prestige booklet and a series of retail booklets which will of course include variants of the basic stamps because they will be self-adhesive rather than gummed.

So, by 3 May 2013, Royal Mail will have issued 44 commemorative stamps, 3 miniature sheets, 7 definitives, 6 retail booklets and 2 prestige booklets plus a number of Post And Go stamps (a total of 62 items plus Post And Go). By the same date in 2012 Royal Mail had issued 45 commemorative stamps, 4 miniature sheets, 16 definitive stamps (including regionals), 1 prestige booklet, 4 retail booklets (a total of 70 items). Thus it does appear at first sight that the total number of issues have been reduced but the excess of numbers in 2012 is mainly made up by definitives and we have yet to hear if more will be produced this year if postal rates rise which they usually do about April. So at the moment there is no convincing evidence that Royal Mail is truly acknowledging its customers' opinions that there are too many stamps being issued and that the announcement of a reduced number of sets being issued was anything but a cynical piece of publicity which they knew that they easily get around.