It's a terrible pity but the responsibility for stamp new issue policies of a number of Commonwealth territories in the Pacific area are gradually being taken over by philatelic agencies which are proving to be wholly unrestrained in the number of philatelic items produced in the name of the postal authorities of those territories. The latest victim is the Samoa Post Office which is now allowing Philatelic Collector Inc. of New York to manage its new issue programme and what was once an admirably conservative new issue policy is now showing the first signs of going off the rails. Hard on the heels of a 10 value sheetlet produced for Christmas 2012 come a $2.10 stamp and $10 miniature sheet which depict a local waterfall (release date 9 February 2013) and a 4 value sheetlet (total face value $12) to commemorate the Chinese new year (released 19 February 2013). 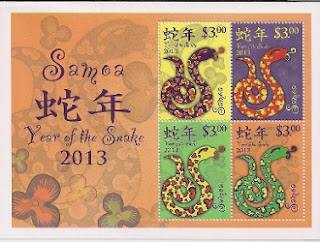 Meanwhile the same philatelic agents have announced a veritable tsunami of stamp issues for early 2013 for the other territories which have allowed them to use their name on the items that they produce.
Cook Islands:- 6 February 2013:- 60th anniversary of the coronation of Queen Elizabeth II (5 stamps and 1 miniature sheet); 20 February 2013:- Cook Islands Marine Park (6 stamps):- 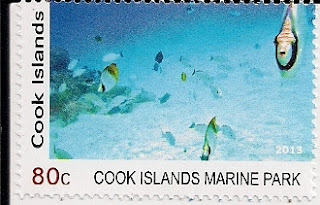 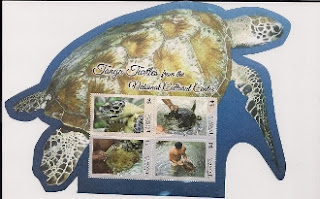 In addition to the above, the agency has produced 6 stamps for personalisation, one each for Tonga, Niuafo'ou, Rarotonga, Penrhyn, Cook Islands and Aitutaki. I bet there will be a lot of "personalised" stamps produced on Penrhyn and Niuafo'ou! The Tonga and Niuafo'ou stamps are said to have been issued on 8 August 2012 while the issues for Cook Islands and its constituent territories are said to have been released on 21 December 2012. 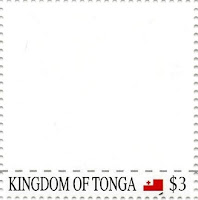 It does not end there. The same agency has produced what we may call a "Chinese New Year omnibus" issue which not only includes the Samoan set illustrated above but similar issues for Cook Islands, Aitutaki, Penrhyn (all issued 21 February 2013) and Tonga and Niuafo'ou (issued 20 February 2013). Owning a philatelic agency is a bit like having a licence to print money if completist collectors are unable to resist buying such items. 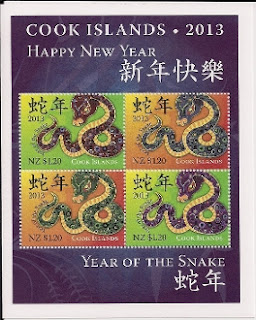 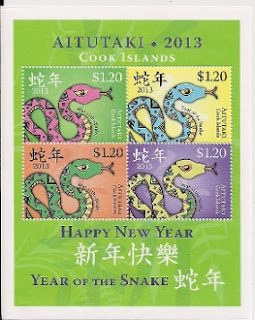 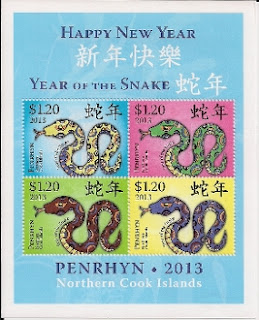 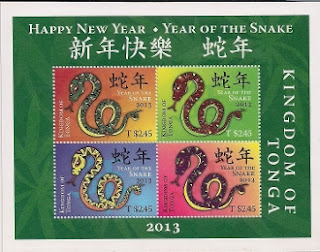 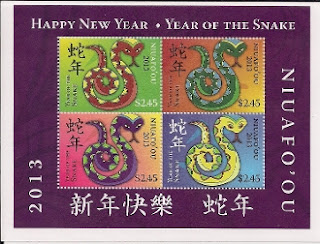 And then there's the matter of The Solomon Islands which has put its philatelic reputation in the hands of Stamperija, a Lithuania-based philatelic agency.  As well as the WWF set and miniature sheets mentioned in a previous blog which feature the Solomon's Cockatoo and which were issued on 15 February 2013, a further 44 stamps (11 sheetlets each of 4 different stamps) and 11 miniature sheets were released on the same date. Some of these items actually have direct relevance of subject matter to the islands themselves such as the issue which features Solomon Islands birds:- 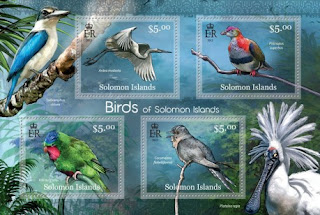 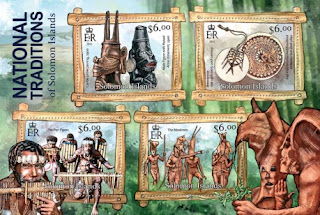 as well as Corals, Local fauna, Rotary in The Solomons and, possibly, a set featuring mushrooms and another which features the world's largest cruise ships. However, there are other items of no relevance at all to The Solomon Islands such as the 435th anniversary of the birth of the Flemish painter, Peter Paul Rubens:- 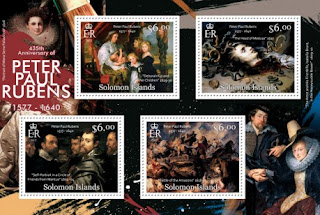 Breeds of domestic cats in which the felines are depicted in decidedly unSolomons-like scenery:- 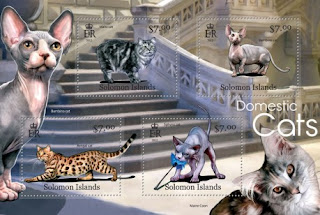 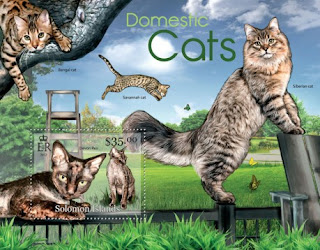 Russian space achievements and the 50th anniversary of the Second Vatican Council which provides the philatelic agency with an opportunity to produce yet more items featuring recent popes such as Pope Benedict XVI, John Paul II and, less often depicted on stamps, Pope John XXIII:- 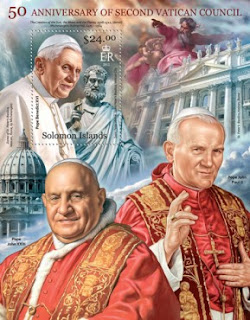 I have recently remarked, and repeat, that the stamps of the Pacific area of The Commonwealth are becoming, or have now become, virtually uncollectible. A pity when one looks back on the marvellous issues which derived from the area in past decades. Will anyone actually buy these, er, stamps? I guess the answer is yes as some of them are actually quite attractive and presumably these agencies would not produce them if they did not see a profit in it. Where will the collecting of new issues be in 5 years time? Time, indeed, will tell.
Posted by White Knight at 07:03