The election of Pope Francis I will no doubt see a flurry of stamp issues to commemorate his succession to the papal throne. Even now, employees of at least two philatelic agencies in New York and one in Lithuania are probably frenziedly manipulating photographs and text inscriptions on a computer screen so that they can be the first to produce stamps with various Commonwealth countries' names printed on them and thus be the first to cash in on the new Pope's face looking out from what would be promoted as a postage stamp. Which country will be the first to have stamps produced on its behalf with Pope Francis peering out from them? - Nevis?, Guyana? The Gambia? (a mostly Muslim country but what does that matter?), Tonga? Samoa? Mozambique? Uganda? Can they produce stamps in a shorter time than the conclave of cardinals managed to elect a new pope? - almost certainly, I would think.
Coincidently, I recently read John Julius Norwich's marvelous book on the history of the papacy titled, simply, "The Popes". The book tells beautifully the history of the various popes from the earliest times and if the Catholic church seems to be mired in scandal now, the present troubles pale into insignificance when compared with what has happened in the past. One chapter is titled "the Monsters" and covers the period 1492 to 1513 and deals with the notorious Alexander VI (Rodrigo Borgia) and the infamous Julius II (Giuliano della Rovere) and another covers the period 858 to 965 with the splendid title "Nicholas I and the Pornocracy" in which Pope John XII makes an appearance ("He allowed the city [Rome] - indeed he encouraged it - to slide into chaos, using its wealth....to gratify his own passion for gambling and every kind of sexual licence"), as does Stephen II who had the body of his predecessor, Formosus, exhumed and put on trial, the corpse decked out in pontificial vestments and there is John VIII who was the first pope to be assassinated - by priests from his own entourage! Popes have been rather less controversial in recent times and one of the best philatelic items produced by a Commonwealth country was issued by Belize on 15 April 1986 to commemorate Easter of that year by depicting 8 of the Popes of the twentieth century with superb portraits of them by the outstanding philatelic artist, Gyula Vasarhelyi. The 8 stamps appeared as a sheetlet with an additional label at the centre:- 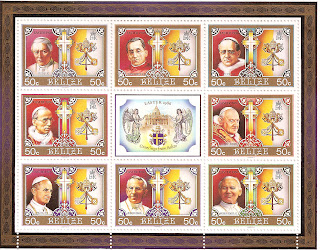 The top left stamp depicts Pope Pius X (Guiseppe Sarto) who succeeded Pope Leo XIII (Giacchino Vincenzo Pecci) in 1903. Norwich describes Pius as being "too quiet, too humble, too holy; and his very holiness closed his mind to original thought" but also "no-one doubted his essential goodness of heart". His holiness meant that in 1954 he was declared a saint, the first pope to be so elevated for about 400 years:- 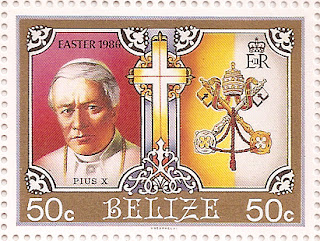 Pius X was succeeded by Benedict XV (Giacomo della Chiese) in 1914 and he saw the Catholic church through the trauma of  the First World War:- 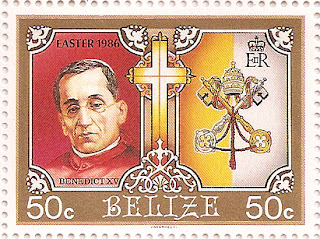 Achille Ratti was elected Pope on 1922 after Benedict's death and took the name Pius XI. During his reign the fascists under Mussolini rose to power in Italy and Hitler took power in Germany. It took years for Pius to recognise the dangers represented by Hitler - he had long been more fearful of the triumph of communism - but when he eventually recognised the true nature of Hitler, though he was very sick, he met the British prime minister, Neville Chamberlain, in January 1939 and tried to instill courage in him to resist Hitler's demands and when he was unsuccessful he was heard to murmur as Chamberlain and his foreign secretary left the papal chamber, "Sono due limaccie" - "They're a pair of slugs" which in retrospect seems like a reasonable diagnosis by The Pope:- 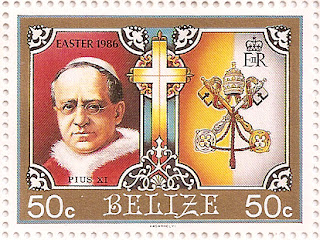 After Pius' death, Eugenio Pacelle was elected to be Pope Pius XII on 2 March 1939. His lack of resistance to Hitler and failure to condemn the Holocaust against the Jews stand out as a shameful part of the history of the Papacy and will forever stain the record of his reign. John Julius Norwich writes, "It is painful to have to record that, on the orders of his successor, the process of his canonisation has already begun":- 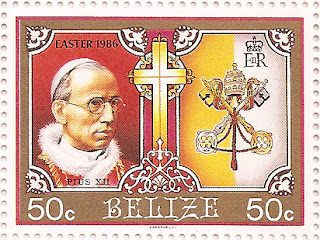 The reign of Pius XII lasted until 1958 when he was succeeded by Angelo Giuseppe Roncalli who became Pope John John XIII. He was a much loved Pope and historically summoned the Second Vatican Council which brought the Catholic church into the modern era:- 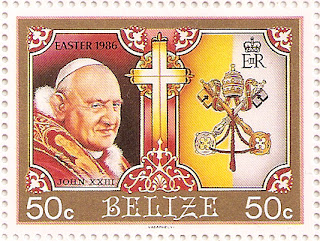 When Pope John died in 1963, he was succeeded by Cardinal Giovanni Battista Montini who became Pope Paul VI:- 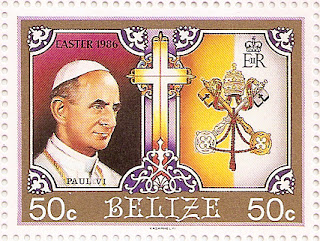 Pope Paul carried out a number of visits abroad including one to Uganda in 1969 and these visits seem to have been the cause of the issue of the first Commonwealth stamps ever to depict a reigning Pope (Malta, a devout Catholic country, had certainly previously issued stamps featuring the first Pope, Peter). he died in 1978 and was succeeded by Cardinal Albino Luciani who took the name, John Paul I. 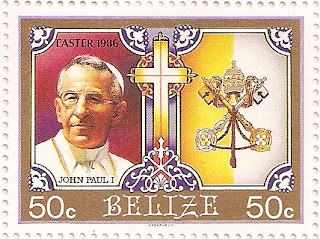 However he died a month after his election, there were suggestions that he had been murdered, and he was succeeded by Karol Wojtyla who became Pope John Paul II. After centuries of Italian popes, the succession of Pope Paul II who was a Pole, was immensely popular and he played an important role in the downfall of communist rule in eastern Europe. He made many trips abroad and visited many Commonwealth countries including The United Kingdom:- 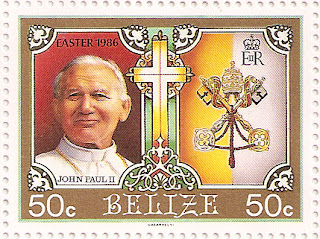 Belize issued a single stamp and a miniature sheet on 7 March 1983 to commemorate John Paul II's visit to Belize. The stamps were poorly designed (note the spelling of "welcome" on the miniature sheet) and very poorly printed by Litografia National of Porto in Portugal:- 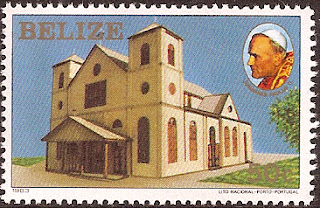 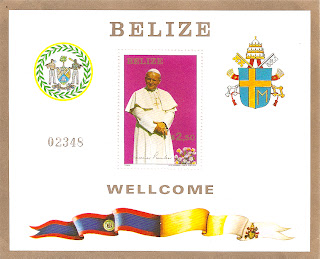 The papal visit was also recalled by a set of 4 stamps and a miniature sheet which was issued on 22 December 1983 to commemorate Christmas, the designs being produced by Gyula Vasarhelyi and very nicely printed in lithography by Format International. The designs showed scenes from the papal mass held in Belize during the Pope's visit:- 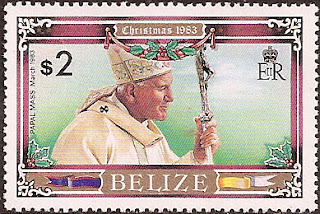 Possibly the first ever Commonwealth papal visit stamps were those which had been those produced for Biafra which commemorated Paul VI's visit to Uganda. The were issued on 1 August 1969 and consisted of four stamps and a miniature sheet which is not formally listed by Stanley Gibbons Catalogue. Biafra was in a state of rebellion against Nigeria and Nigerian federal troops overran the territory on 10 january 1970 so the status of these first Commonwealth papal stamps is somewhat dubious:- 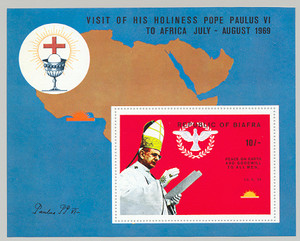 Saint Lucia marked the deaths of Pope Paul VI and his successor with an issue of 5 stamps which were released on 28 May 1979. The 5c value depicted the two deceased popes while the other values showed illustrations of Paul VI in the company of notable foreign personalities:- Anwar Sadat of Egypt (30c), U Thant, UN Secretary General (50c), Golda Meir of Israel (55c) and Martin Luther King ($2):- 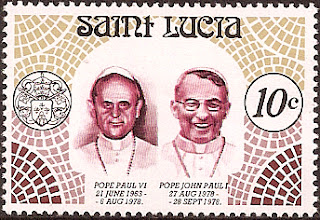 When John Paul II died in 2005, Saint Lucia and Belize joined other Commonwealth territories, which included Seychelles and Kiribati, in participating in a small Crown Agents omnibus issue where each territory issued a single stamp, each depicting a different portrait of the Pontiff:- 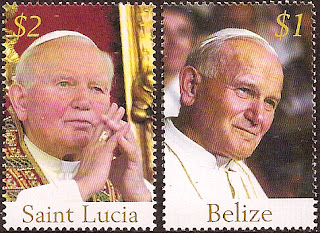 Both of the above were issued on 18 August 2005 and were designed by Andrew Robinson and lithographed by BDT. In Blog 208, I have dealt with the various issues which mark the Pontificate of Pope Benedict XVI and we  must now see what awaits us in the way of stamp issues from Commonwealth countries which mark the arrival of Pope Francis.
Posted by White Knight at 07:02