Universal Mail United Kingdom has recently released 3 new booklets, each containing 5 different self-adhesive stamps for use on postcards sent abroad with special regard to the tourist market. All three are in the "bespoke" design group and feature popular tourism sights and depicted above is Booklet no. UK0070 which is dated 11/12 which presumably suggests that it was released in November 2012. The designs feature scenes and artifacts of the Roman baths in Bath in west England. Interestingly, although all 3 booklets depict English subjects, the flag included in the design is the Union Jack rather than St. George's Cross. The photograph on the 4th stamp from the top has previously been used on a stamp in Booklet UK0046  06/12 but on that occasion the stamp design depicted the St. George's Cross flag rather than the Union Jack and the inscription read "Roman Baths" rather than "The Roman Baths, Bath" which appears on the most recent issue. Bath's Roman baths were also featured in one of the first booklets issued (UK0011 05/09) but the single stamp in the booklet which was inscribed "South West England Souvenir Stamps" depicted a different picture of the baths.
UK0069 is dated 12/12 and all 5 designs feature "Saxon Tower Oxford" with the inscription on the front of the booklet reading "Oldest Building in Oxford Saxon Tower of St Michael at the North Gate" which is about as self-explanatory as it needs to be. A booklet has previously been issued dedicated to the city of Oxford (UK0040 06/12)  but the designs centred on various buildings of Oxford University;- Bridge of Sighs, Christ Church College, Radcliffe Camera, All Souls College and Magdelen College and the flag depicted on those designs was St. George's Cross. The All Souls College design also appeared on one stamp in booklet UK0012 05/09 but the flag featured on that occasion was the Union Jack.

Booklet UK0071 1/13 depicts tableaux of historic events which occurred in London which are found in  The London Dungeon, a tourist sight on the London South bank. Each stamp bears the inscription "Fear Is A Funny Thing", which must mean something to the person who came up with it but is rather lost on me apart from reminding me what an unpleasant place London is now. I guess that the top design features an actor playing William Shakespeare since it depicts a man, probably in Elizabethan dress, holding a pen quill (of course Shakespeare originated from the English Midlands rather than London) and the second from the top clearly depicts Guy Fawkes who, with other conspirators (again largely from the English Midlands), attempted to blow up King James I and Parliament. The 4th design from the top seems to depict the notorious murderer Jack The Ripper (whose identity remains unknown so that we can not say if he too originated in the English Midlands) and the stamp at the bottom of the strip clearly depicts Sweeney Todd, another murderer, which again seems to emphasise that not only is London a pretty horrible place now but it always seems to have been the same. I'm not sure that the depiction of murderers on stamps helps the tourist industry very much:-

Leaving murderers aside, and travelling to other side of The Commonwealth, a recent issue from New Zealand is rather less menacing. A set of 5 stamps and a miniature sheet were issued on 13 March 2013 which depict scenes from the books of Margaret Mahy, a local writer of books for children:- 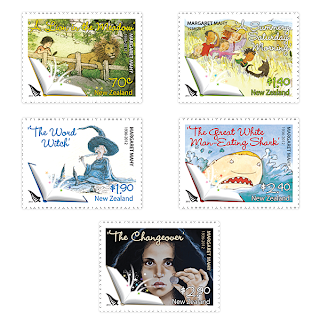 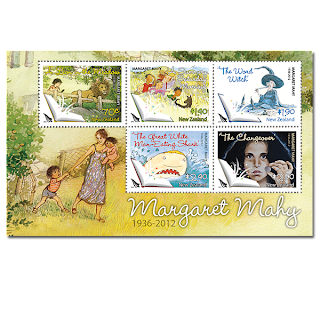 However, the next issue from New Zealand will have a military subject: the service of New Zealand forces abroad. The issue which will be released on 10 April will consist of 6 stamps and one of those "miniature sheet" booklets which New Zealand Post produces almost annually and which consists of 6 different miniature sheets, each one centred around one of the individual stamps plus a 7th pane which combines all 6 stamps. Publicity emphasises that the "miniature sheets" will only be obtainable by buying them in the booklet format, the cost being NZ$19.90. 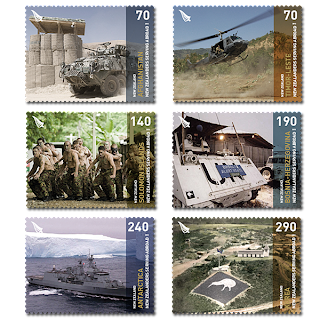 Finally, New Zealand Post has also produced the first issue of the year from Niue which is also to be released on 10 April 2013. The issue consists of 4 stamps and a miniature sheet and depicts local butterflies and seems to continue the trend established by New Zealand Post when they took over responsibility for the stamps of Niue of producing reasonably attractive but wholly unexciting designs. Still, at least New Zealand Post spared the the island the philatelic fate of some of the other Commonwealth territories in the Pacific area:- 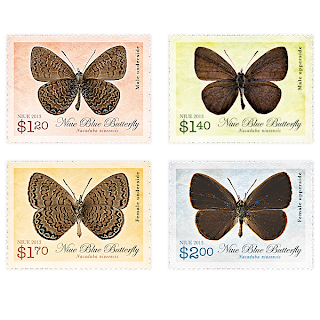 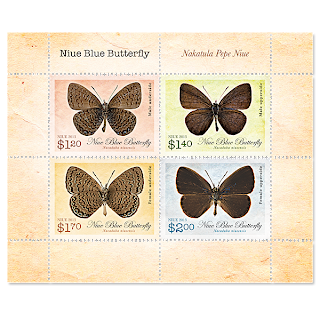