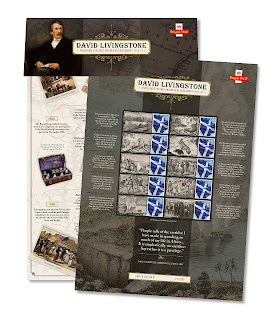 It says a lot for the values of Royal Mail, the British postal service, that while it will issue 16 different stamps on 26 March 2013 to commemorate the 50th anniversary of a fictional television doctor, Dr. Who, whose achievements exist only in the minds of the people who watch the programme, there is no stamp issue to be made by the postal administration this year to commemorate the bicentenary of the birth of Dr. David Livingstone. missionary and explorer, whose achievements were very real and very great. Clearly there is very little profit to be made by commemorating the life of a truly great Briton in comparison with a character from popular television. This omission is disgraceful and demonstrates just how shallow and intensely profit-orientated those who oversee Royal Mail's stamp new issue programme really are. To be fair, there is a minor commemoration of the great man to be made on 1 May 2013 when Royal Mail will issue a "business sheet" of 10 x 1st class (total face value £6) Scottish regional stamps (Livingstone was a Scotsman) which will be sold for the exorbitant price of £14.95 so if somebody bought the sheet and used one of the stamps on their mail they would be paying a domestic first class postage rate of £1.50p (150% above the correct postal rate; so David Livingstone will clearly not receive any public recognition for his great achievements as the result of the production of this appallingly-priced item - who would be mad enough to pay £1.50 to send a first class letter?) 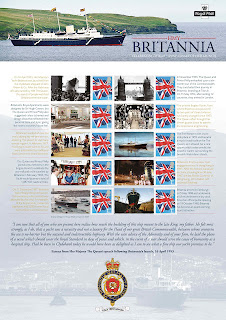 Clearly somebody buys these "business sheets" as Royal Mail will also issue a similar item on 16 April 2013 to commemorate the 50th anniversary of the now-mothballed HMS Britannia, the former Royal Yacht, cost of the sheet again will be the incredibly cheeky sum of £14.95p. And there will also be a sheet of 20 stamps with attached "Smilers" labels to coincide with the "Australia 2013" Philatelic Exhibition to be held in Melbourne. I have long given up collecting these "Smilers" and "Business" sheets as they are ridiculously exploitative and I really do have better things to do with my money. 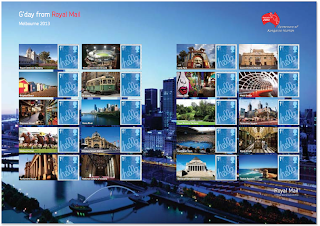 Doubtless, the post offices of other countries which have a deeper appreciation of history and an understanding of what really makes someone worthy of philatelic commemoration will make up for Royal Mail's neglect of David Livingstone and his achievements and we will see a number of worthy issues from some Commonwealth countries which commemorate this great man during the course of 2013. 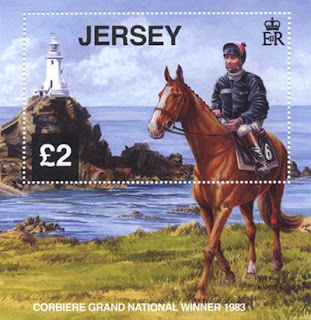 In a previous blog, I mentioned the set to be issued by Jersey which commemorates the racehorse, Corbiere, but overlooked that there will be an attractive miniature sheet to accompany the issue. How wonderful to see original art being used on stamp design; Jersey really is doing quite well this year after last year's appalling diamond-encrusted nonsense. I cannot help pointing out that the horse gets 4 stamps and a miniature sheet depicting him while Dr. Livingstone warrants no stamps at all from Royal Mail (not to over-egg the point). Doubtless Stamperija will have noticed that David Livingstone was born 200 years ago and will not miss the opportunity to commemorate him on one of its multiple issues to appear from Mozambique and Uganda during 2013. The WWF Stamps website illustrates an issue to be released by Mozambique in March 2013, the design featuring Temminck's Ground Pangolin, one of the stranger-looking creatures to appear on a postage stamp and even stranger than the "Ood" which is featured on Royal Mail's Dr. Who miniature sheet:-