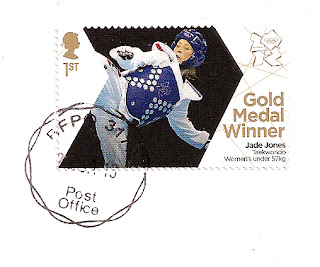 I think that it would be true to say that stamp collectors learn a great deal of what they know about the world from their stamp collection. We learn about countries and territories in far off places which other people have never heard of; we see pictures of strange animals or birds or flora or scenery or culture that most of our friends who have never put a stamp in a stamp album will never know about. And I'm still learning but occasionally stamps miss something. Take, for instance, the question, which territories still belong to The United Kingdom, long after the end of the British Empire, as Overseas Territories? Collectors of Commonwealth stamps will find that an easy question to answer, just think of those that issue stamps - Anguilla, Bermuda, British Antarctic Territory, British Indian Ocean Territory, British Virgin Islands, Cayman Islands, Falkland Islands, Gibraltar, Montserrat, Pitcairn Islands, St. Helena with its dependencies of Ascension and Tristan Da Cunha, South Georgia And South Sandwich Islands and Turks And Caicos Islands, grand total 13 overseas territories. Wrong! There are 14 United Kingdom Overseas Territories - unusually in the modern world, one of them does not issue its own postage stamps:- The Sovereign Base Areas Of Akrotiri And Dhekelia. I wonder if this is the only de facto separate territory in existence today apart from Somaliland which does not issue its own postage stamps. The Sovereign Base Areas came into existence in 1960 when Cyprus achieved independence and agreed a treaty with The United Kingdom which allowed the British to retain 3% of the area of the island so that it could continue to use its military bases on the island which included RAF Akrotiri and a garrison of the British Army.
The current territory is split into two parts - Akrotiri which includes Episkopi Garrison and constitutes Western Sovereign Base Area being located in the south of Cyprus near the city of Limassol and Dhekelia which forms the The Eastern Sovereign Base Area, located in south-east Cyprus near Larnaca. In all 14000 people live in the combined territory, 7000 of which are citizens of Cyprus, the rest being members of the British military forces and their dependents. The territory is administered by the Commander of British Forces In Cyprus and the flag of the territory is the Union Jack. The currency in use there is the euro which means that the Sovereign Bases are the only territory under British sovereignty in which that particular currency is used. Which is interesting since the British forces' postal needs there are served by British Forces Post Offices which of course use British stamps to signify the prepayment of postage. This raises a few questions with me which someone may be able to answer for me - what postal service do the native Cypriot civilians in the base areas use? Are there Cyprus post offices available for their use inside the Sovereign Base Territory or do they also use the British Forces Post Office - surely not? And since British stamps for use on British Forces mail are denominated in pounds and pennies how does that work since the currency in circulation is the euro?
It was only recently that I realised that The Sovereign Bases are a separate Overseas Territory and I thought that I should have a few covers in my collection to represent this separate political, if not philatelic, entity in my Commonwealth stamp collection. I decided to write to the Sovereign Base post offices enclosing a stamped addressed envelope in the hope that the cover would be returned to me with a nice cancellation of the local Forces Post Office postmark. A Ministry Of Defence website lists 4 postcodes to be used on mail to British Forces in the Sovereign Bases from which I deduce that there are 4 centres where mail is dealt with - these are BF1 2AS (Epsikopi), BF1 2AT (Akrotiri), BF1 2AU (Dhekelia) and BF1 2AW (Ayios Nikolaos). The RAF Akrotiri post office is located in the Oasis Centre in Golden Jubilee Way. I sent covers to each of these postcode addresses and after a couple of months I have received two back, for which I am grateful to the postal officers responsible for taking the trouble to send them to me. The two cancellations on the returned covers are depicted above and below. Of course, I have no idea which of the four addresses I sent them to, use the particular postmark (I did not think of marking covers to identify which was which before sending them to Cyprus) but the cancellations are those of BFPO 3177 (above) and BFPO  3036 (below). The latter was additionally cancelled, for some unknown reason by Royal Mail in Birmingham on its return journey but fortunately the nice BFPO cancellation has not been spoiled by the intrusive additional postmark. 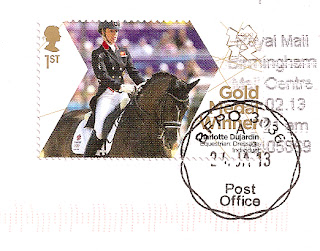 I have also just obtained a cover from 1966 on which contemporary British stamps are cancelled with the FPO 943 postmark, the cover having been sent from RAF Episkopi which was BFPO 53 to the Base Supply Officer on the rather ominously named HMS Terror in Singapore. 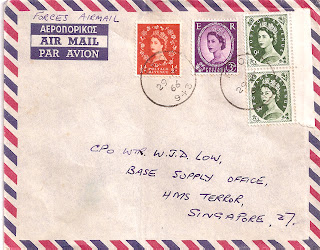 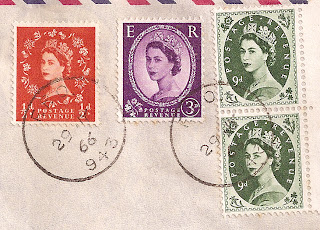 So, having discovered that there is a 14th British Overseas Territory, I now have a small representation of the place in my stamp collection. It is one time that stamps did not tell me that such an territory existed (I knew that there were British bases in Cyprus but did not know that they represented a separate political entity) and it is one of those rare occasions when a political entity does not have its own stamps. How much more interesting it all is than spending lots of money on stamps produced for several small Pacific islands which feature rather poor illustrations of snakes to ostensibly celebrate the Chinese new year when the size of the populations of Chinese people on those islands is negligible (see previous blog).
Posted by White Knight at 06:16