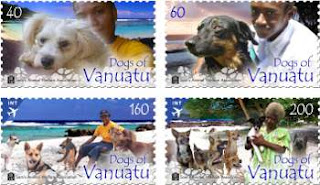 In the last 2 blogs I have mentioned 2 new sets produced by Australia and Jersey which feature the topic of domestic dogs. A third issue has also just been released by Vanuatu on 27 February 2013. The issue consists of 4 stamps and 1 miniature sheet and the items are produced to the wonderfully high standard that Vanuatu stamps usually reach. I really like this set in that instead of depicting expensive pedigree breeds of dogs, the particular four-legged friends which are shown in the designs, are clearly local dogs of mixed breed shown in their local setting. And what a grand bunch of faithful friends they seem to be. The issue commemorates Sam's Animal Welfare Association which is a local Vanuatu charity which was founded after a local widow made a generous donation in memory of her husband and their faithful dog, Sam. The Association is made up of local volunteers who provide animal welfare services in Vanuatu and also carry out education programmes especially in local schools about the humane care of animals in the islands and the benefits of owning pets. 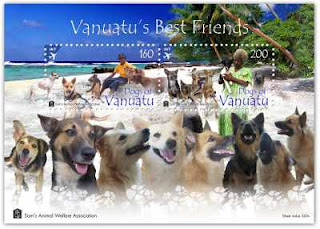 These excellent stamps were designed by Denise Durkin and lithographed by Southern Colour Print. They are exactly what small countries should be issuing - items of local interest and educational value at prices which actually reflect local postal rates in attractive and interesting designs. Vanuatu is one of the best postal administrations in The Commonwealth when it comes to issuing new stamps and I hope that  Vanuatu Post Office sells lots and lots of their excellent products. If only a few of the other Pacific island territories of The Commonwealth would follow Vanuatu's lead. Vanuatu also issued two other excellent sets recently - 2 stamps to commemorate the Red Cross and 4 Greetings stamps - both sets being released on 5 December 2012 and also designed by Denise Durkin and lithographed by Southern Colour Print:-

As "Dogs" seems to be the big theme at the moment, it is worth mentioning that the first stamp ever to depict a dog was issued by Newfoundland on 15 February 1887 as part of a definitive series for the colony which was printed in intaglio by the British American bank Note Company of Montreal. The one half cent stamp which aptly featured a Newfoundland was first issued in a rose-red colour and then reissued in November 1894 in black.  The red colour was reissued in an orange-vermilion shade in January 1896:-

The Newfoundland dog re-appeared on the stamps of Newfoundland as part of a definitive issue which was released on 2 January 1932. A splendid specimen of the breed was depicted on the 14c value which was printed in intaglio by Perkins Bacon. The stamps were comb perforated 13.5. The stamp was reissued in 1941, this time printed by Waterlow in intaglio and with line perforation 12.5.

A final version of a Newfoundland dog design was issued by the country on 12 May 1937 as part of a long set which commemorated the coronation of King George VI. The set was printed in intaglio by Perkins Bacon:-

The Newfoundland was not the only breed to feature on the stamps of Newfoundland. Huskies were depicted pulling a sleigh on a 15c airmail stamp which was issued on 2 January 1931 on unwatermarked paper and reissued on 13 March 1931 on paper with a watermark which depicted the coat of arms of Newfoundland. The stamp was designed by AB Perlin and printed in intaglio by Perkins Bacon:- 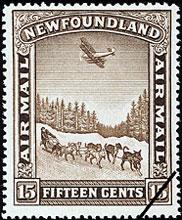 The first British stamps to depict dogs were not issued until 7 February 1979 when 4 stamps were released each depicting a breed to represent one of the countries of The United Kingdom. The stamps were illustrated by lovely art work by Peter Barrett and were printed in photogravure by Harrison and Son. The designs depicted an Old English Sheepdog, a Welsh Springer Spaniel, a West Highland Terrier (Scotland) and an Irish Setter (Northern Ireland):- 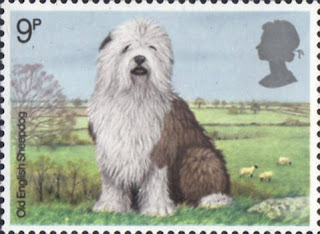 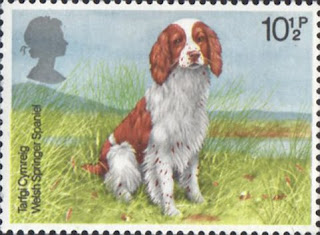 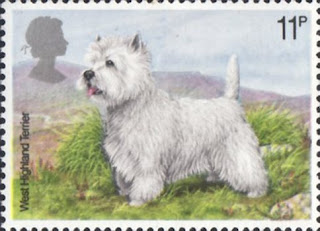 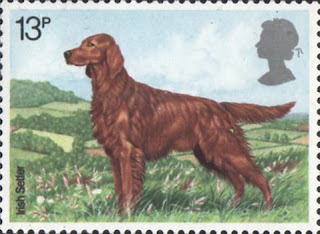 A second dog issue followed soon afterwards with a stamp being released on 25 March 1981 as part of a set of 4 which commemorated International Year Of The Disabled. The particular stamp featured a yellow labrador working as a guide dog for blind people, a role for which the breed is particularly well-known. The stamp was designed by J. Gibbs:- 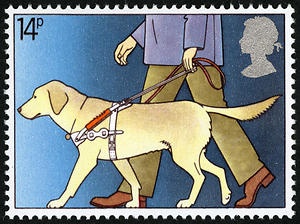 In recent years, a large number of Commonwealth territories have released stamps which illustrate the topic of dogs, both domestic and wild, and the less scrupulous philatelic agencies which produce stamps in the name of a number of poorer Commonwealth territories have found that "dogs on stamps" can be a big money-earner for them. I avoid most of those issues as I hate to be exploited by such agencies but I will certainly be adding the Vanuatu set of dog stamps to my collection.
Posted by White Knight at 04:52