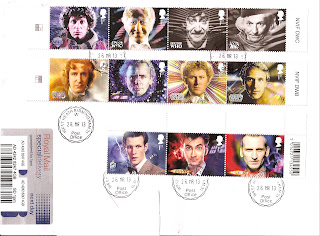 It's a fact that most commercially produced first day covers in present times are not exactly what they claim to be, certainly here in Britain at any rate. The stamps are usually made available to the first day cover prodcers some time before the announced day of issue so that they can prepare their products and then deliver them to Royal Mail so that the special first day postmarks can be applied to the covers, not necessarily on the precise day of issue. The postmarks are applied to the covers at regional postmarking centres which are not necessarily in the same geographical locations as named on the commemorative postmarks. Sometimes, extraordinarily, the postmarks suggest that the covers were cancelled at post offices in villages or towns that do not even have a post office or have once have had one which has now been closed. Many such covers are extremely attractive, almost works of art, but also frequently remarkably expensive and as postal items they are actually a nonsense. I gave up collecting first day covers in 2000 but when I visited my local sub-post office, West Heath - a tiny suburb on the outskirts of Birmingham - on 26 March 2013 and saw how attractive the new Dr. Who stamps appeared to be, I could not resist buying a set and putting them on a large envelope and sending them by special delivery to myself. By so doing, the cover was cancelled by the kind and helpful counter clerk with beautifully positioned and clear, neat local cancellations and I could be sure that this was a genuine first day cover with stamps bought from the post office on the date of issue and posted on the same day.

I recently received the latest India stamps from a dealer from whom I regularly buy new issues and included in them was a single stamp which commemorates "National Mathematics Day". On close examination of the stamp I see that the date imprinted at the lower left corner is "2010". I have not previously been aware of that issue having been released in 2010 so I wonder if this is an issue which was due to appear then but did not for some reason or if this is an issue from 2010 which has only just appeared on the retail market or if the imprint date is simply a design error. If anyone who reads this knows the correct answer, I should be delighted if they would let me know in the comment section at the end of the blog. 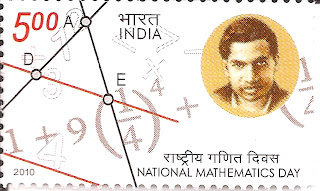 I could not resist featuring another recent dog issue from a Commonwealth post office particularly as it includes an illustration of a labrador retriever to add to my labrador collection. Sad to say, the art work on the stamp which has been produced on behalf of Sierra Leone, is rather poor and the featured labrador would be somewhat difficult to identify as an example of that breed without being told of its identity. It certainly would not win "Best of Breed" at Cruft's Dog Show:- 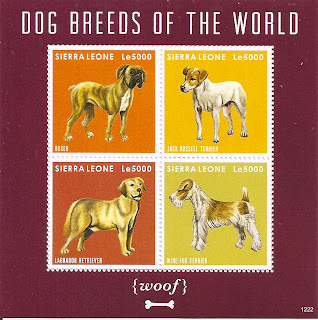 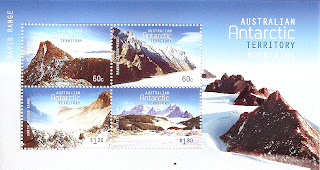 I return to the subject of my home-produced covers. In blog 210 I described the covers I obtained by sending stamped envelopes addressed to myself to the Forces post offices in Akrotiri and Dhekelia, the British Dependent Territory in southern Cyprus. At the same time, as I have a particular interest in the stamps of the Indian Ocean area, I sent a similar item to BFPO 485 (Naval Party NP1002 in Diego Garcia) at post code BF1 4TG. After a couple of months I received the item illustrated below which I find to be very interesting. It does not have a BFPO cancellation and indeed the British definitive applied to it remains uncancelled but an oblong-shaped cachet in red has been applied to the bottom right-hand corner which says "BIOT POST OFFICE DIEGO GARCIA" and is dated 12 MAR 2013. I'm guessing that the cover must have been passed on to the civilian BIOT post office which applied the cachet very neatly to the cover and then returned the cover to me, the journey apparently taking 15 days from the time of cancellation till it dropped through my letter box although its adventures had not yet ended since my dog (a labrador of course) raced to the door at the sound of the postman's arrival and seized the cover and took a small bite out of the top of the envelope though the damage was minimal fortunately.

Of course the island of Diego Garcia is the sole raison d'etre of The British Indian Ocean Territory used, as it is, as an enormously important and strategic United States Air Force base. The Territory was established on 8 November 1965 by grouping various fairly isolated Indian Ocean islands which had previously been administered by the British colonial authorities in Mauritius and Seychelles in a separate colony so that the most significant island, Aldabra, could be developed as a strategically important military base. Aldabra was viewed as an ecologically important site and eventually it was decided not to use that atoll as the place where the new base would be built and it and other islands which included Desroches and Farquhar were returned to Seychelles when the country gained its independence in 1976. However, the Chagos archipelago remained part of the BIOT and the main island of the group, Diego Garcia, was developed into the military base instead of Aldabra. The human inhabitants of The Chagos were less fortunate than the giant tortoises and rare birds of Aldabra since they were forcibly evicted by the British from their homes on the islands and exiled to Mauritius in one of the most shameful acts of modern British history. The islanders, known as the Ilois, have since attempted through the British legal system to be allowed back to their island homes but even English Law has let them down and they remain exiles. Meanwhile Diego Garcia continues to exist as an American base. In my blog of 9 July 2010 I illustrate a cachet and a postmark in use at Diego Garcia then and I also have in my collection a cover with a 15c value stamp from the 1968 definitive series which is cancelled by a black circular date stamp inscribed "DIEGO GARCIA. CHAGOS B.I.O.T." and dated 28 FE 1969:-

I also have a few covers from Aldabra where the Aldabra drongos and white-throated rails are flourishing having been spared the destruction of their habitat that the unfortunate Ilois suffered in Diego Garcia. I have a pair of registered covers which between them bear a complete set of the 1968 definitive set of Seychelles stamps overprinted "B.I.O.T." and which are postmarked with a black "ALDABRA ISLAND B.I.O.T." circular date stamp and dated "* DE 1 68". The significance of the date on the postmark is that it was the first day that the set of stamps was sold on Aldabra Island (a local first day of issue although the Crown Agents had released the stamps on 15 January 1968 and Stanley Gibbons gives the local first day of issue in the BIOT as being 17 January 1968, presumably on one of the other islands). The cover with the high values of the set is depicted below:- 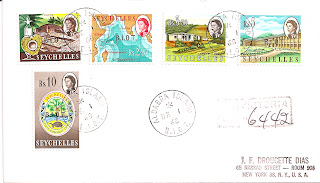 The Lindblad Explorer was a small cruise ship active in the Seychelles area in the early 1970's having made its inaugural Indian Ocean cruise in April 1970 with cruises continuing until November 1970 and then being repeated during 1971.  The tours commenced in Mombasa and after 2 days spent at sea calls were then made at Mahe, La Digue, Praslin, Cousin, Desroches, Ile Des Nouefs, Farquhar, Aldabra, Grand Comore and then, after a further day at sea, the ship returned to Mombasa. The cover illustrated below relates to a cruise in late 1971 and bears 4 of the definitives of the set issued by BIOT on 23 October 1968 which been designed by Gordon Drummond from artwork made by Mrs. W. Veevers-Carter,  a British woman who lived for a while on one of the Seychelles islands, Remire or Eagle Island:- 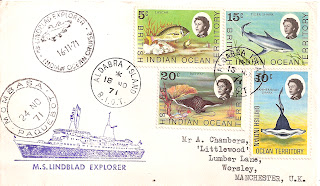 The stamps themselves are cancelled by the Aldabra Island circular date stamp and dated 18 NO 71:- 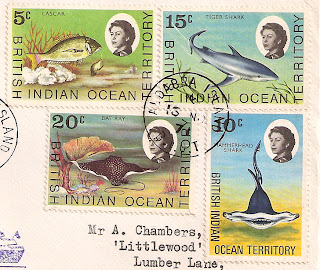 and other markings on the cover include a blue circular mark inscribed "LINDBLAD EXPLORER. INDIAN OCEAN CRUISE" with the Mombasa Paquebot cancellation in black and dated 24 NO 71:- 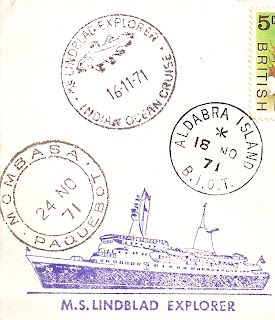 Another cruise ship of note in Aldabra's postal history was The M.V. World Discoverer which visited Aldabra four times during 1991. I was lucky to be aboard the ship during its first cruise of that year and was delighted to be told that the ship was carrying a cancel sent out from Mahe by the Seychelles Post Office which was to be applied to any mail leaving the island. The mark was applied as a cachet to the cover rather than directly on to the stamps and since I was on the scene of the inauguration of this cancel I prepared some covers for myself and asked the local "postmaster" (actually one of the 8 temporary residents of the island who fulfilled that role secondary to his job of working at the island's meteorological station) to arrange for my covers to be sent to my home in England through the post. Not surprisingly, there was no building on the island which was designated as the local post office. The covers were despatched from Aldabra on 21 April 1991 with the special cancellation, diameter 34mm,  applied in blue ink - it reads "ALDABRA SEYCHELLES WORLD HERITAGE SITE" - and were apparently returned to Victoria via Mombasa by the 2 immigration officials who must have travelled with the World Discoverer to Aldabra with the purpose of dealing with the tourists and crew on board when they arrived at the island. At Victoria the stamps on the covers were cancelled by contemporary "CENTRAL POST OFFICE VICTORIA MAHE SEYCHELLES" and dated "07.05.91", having therefore taken 17 days to arrive at the Seychelles capital for sending on to Britain. To the best of my knowledge, no-one else aboard the World Discoverer sent any mail from Aldabra on that occasion so I am rather pleased to have some unique items in my collection:-

I think that some of the above items illustrate that it is possible to thoroughly enjoy the hobby of stamp collecting without feeling the need to spend large amounts of money on expensive new stamp issues and being a slave to the whims and prejudices of stamp catalogue editors. We can collect what we like and if we are inventive in our approach to our hobby we can ourselves create items which are of far more interest than some that are commercially available.