Whether or not one agrees that Australia Post issues far too many stamps, there's no denying that the stamps are usually well designed and nicely printed with interesting and attractive subjects. On 19 February 2013, 5 basic stamps were released which depicted breeds of small dog, all of them showing dogs with plenty of character about them. Of course, with Australia, nothing is simple and the stamps are sold either gummed from ordinary sheets or in self-adhesive format from 5 different booklets, each devoted to one breed.
Six new greetings stamps were issued on 5 February 2013, all available in gummed format and the 5 lower values in self-adhesive format obtained from 5 different booklets (I'm glad I gave up collecting Australian booklets some years ago, the number that the country produces would bankrupt most people if they attempted to form a complete collection of them and I have not even mentioned the prestige booklets which now accompany almost every Australia Post issue). 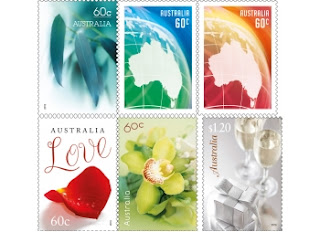 Two gummed, 1 ex-booklet self-adhesive and 1 coil self-adhesive stamps were released on 5 March 2013 to commemorate the centenary of the capital of Australia, Canberra:- 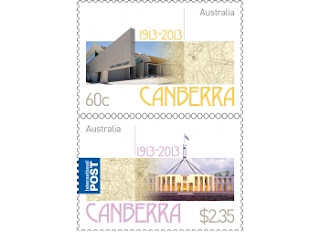 and to finish off this news of Australia's latest philatelic floods, 4 gummed, 4 ex-booklet self-adhesive and 4 coil self-adhesive stamps plus 1 miniature sheet were issued on 12 February 2013 to commemorate the pastime of surfing in Australia:- 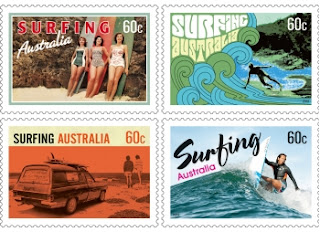 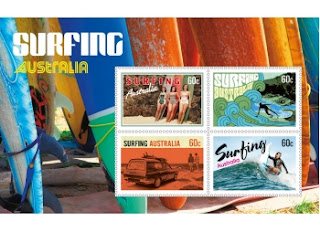 What can one say?