1500. 🇬🇧 Elton John Commemorated On Royal Mail Stamps, As If We Didn’t Know. 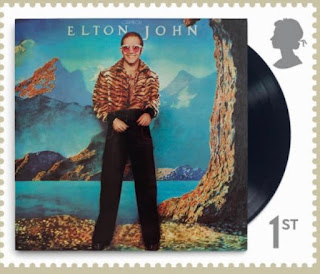 🇬🇧 Royal Mail has now released details of the ‘Music Giants’ issue to go on sale at post offices when they open on 3 September 2019. As predicted by a British tabloid newspaper the issue commemorates the 50th anniversary of Sir Elton John’s entry into show business. The issue is made up of numerous items - 8 stamps (£9), 1 miniature sheet (£4.50), 1 booklet containing 6 self-adhesive stamps (4 x 1st Class Machins and 2 different from this issue) sold for £4.20p and 3 Collectors sheets, 2 of which cost £7.50p. and the other £10.20p, plus countless other ‘Collectibles’ which may be desirable to someone.
The issue was designed by Royal Mail Group from an original design by Studio Dempsey and lithographed by International Security Printers and perforated 14.
Hence those who decide such things at Royal Mail have concluded that this elderly pop musician is worthy of more stamps to commemorate him than Handel, Elgar, Tallis, Byrd, Vaughan Williams, Britten and so on combined. Maybe he is. But I doubt it.
Nevertheless British culture, along with the royal family and perhaps also our politics when it is as entertaining as it is now what with its big, strutting, larger-than-life prime minister taking on all comers including the equally larger-than-life (though not physically) ‘Order! Order! Speaker, can still hold the world spellbound. Britain carries on trading on its image with its Downton Abbey/Harry Potter/James Bond/Dr Who and even Peaky Blinder entertainments being embraced as enthusiastically around the world as much as Shakespeare and Jane Austin and Dickens continue to be. And so perhaps I should not be quite so hard on Royal Mail’s approach to its depiction of our popular culture and its current heavy emphasis of featuring it on its stamps - sure the stamps are there to make a lot of money for Royal Mail - but they also promote Britain and if music is currently more Elton than Elgar then perhaps collectors need to accept this current phase in stamp issuing. Rating:- ***. 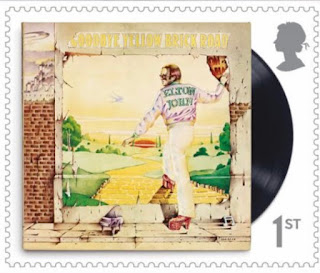 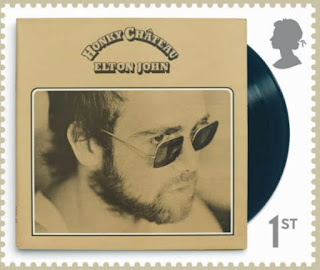 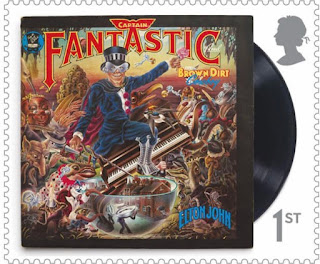 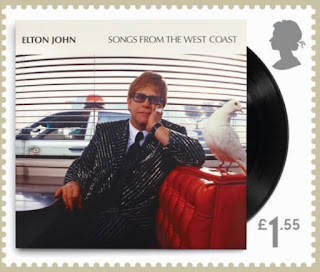 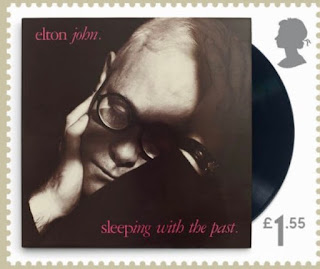 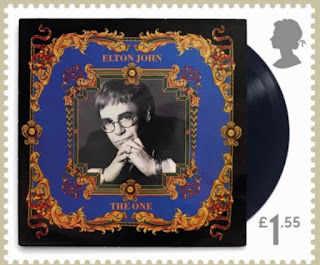 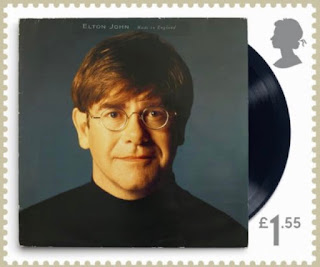 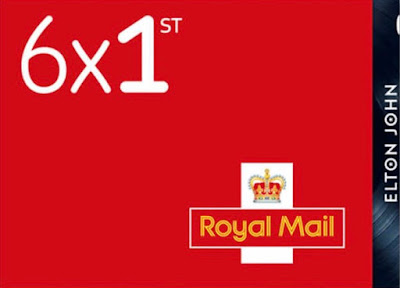 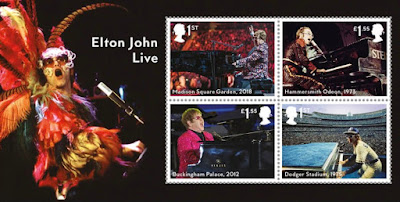 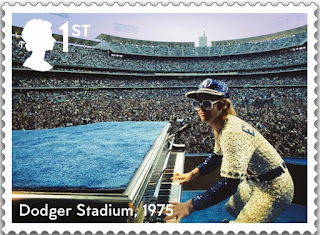 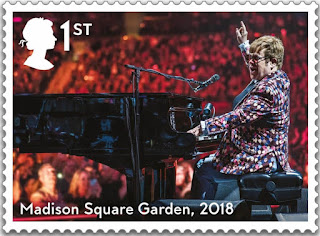 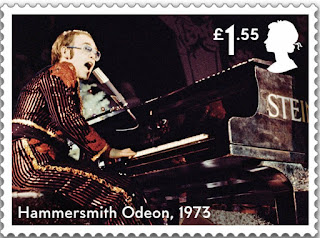 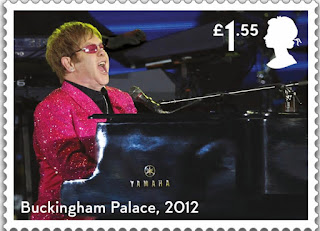 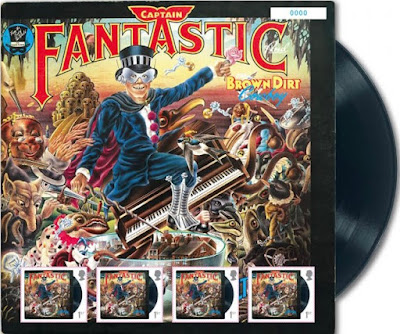 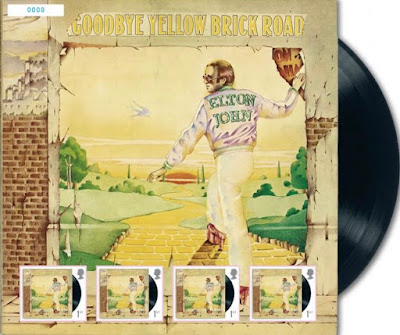 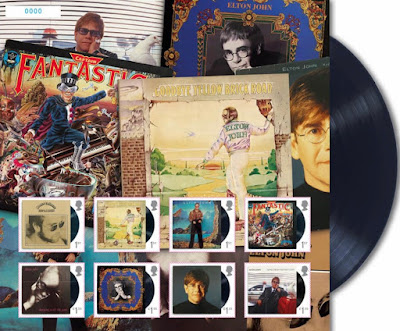 🇬🇮 The Royal Gibraltar Post Office issued a strip of 6 new Post & Go stamps, the first release of such items since 20 April 2019, on 29 August 2019 which commemorates the 50th anniversary of the first manned lunar landing and which reuses the 6 designs of the commemorative issue released on 5 July 2019. There are many subjects of local relevance which the Royal Gibraltar Post Office could have depicted on this new Post and Go series and so the choice of the moon landing is disappointing to me. Rating:- 0. 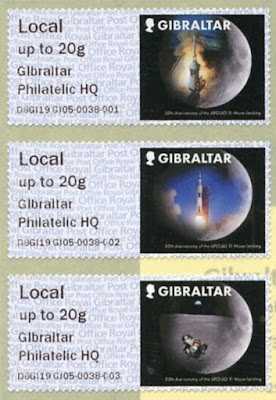 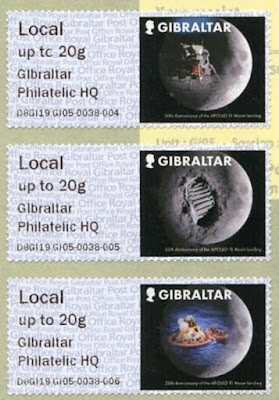 🇬🇧 The Postal Museum in London will issue 6 previously issued Royal Mail Post and Go stamps with additional inscriptions on 11 September 2019 to coincide with the opening of Autumn Stampex 2019 to commemorate the centenaries of several airmail ‘firsts’ - RAF flights to Cologne, the first flight across the Atlantic Ocean, the first flight to Paris and the pioneer flight to Australia. The inscription reads, “The Postal Museum/Airmail 1919”.
Now that Royal Mail Post and Go issues are much less frequent than in recent years I find this to be an appealing issue and of interest due to the postal history anniversaries commemorated by it. Rating:- ****. 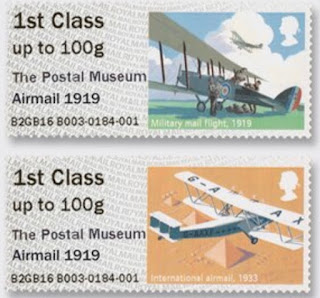 🇮🇳 India Post issued a set of 12 stamps in a se-tenant block (3 x 4) and printed in small sheets of  24 producing 2 blocks of 12 on 30 August 2019 on the subject of ‘Masters Healers of Ayush’. Each stamp features 1 of 12 eminent scholars,  practitioners and master healers of Ayush (Ayurveda, Yoga and Naturopathy, Unani, Siddha And Homeopathy). India has a Ministry of Arusha whose role is to develop and promote education about and research into the fields of alternative medicine. Rating:- ***. 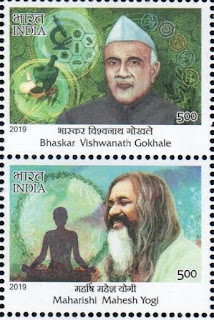 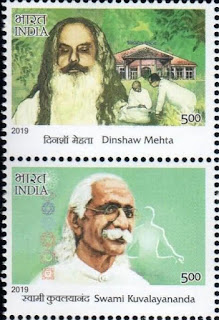 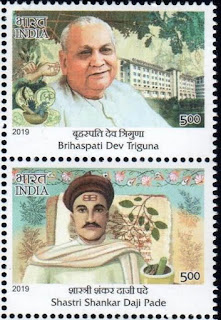 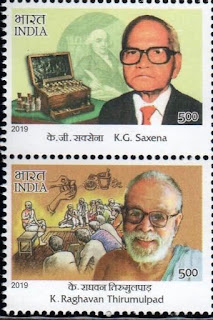 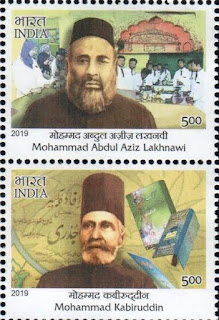 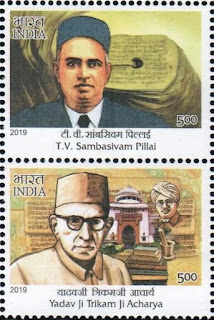