🇵🇳 Bounty Post, the postal service of Pitcairn Islands, issued a miniature sheet containing 4 different stamps to draw attention to Pitcairn’s status as a Dark Sky Sanctuary. This attractive and interesting issue was designed by Denise Durkin and lithographed by Southern Colour Print. The date of issue was 4 September 2019. 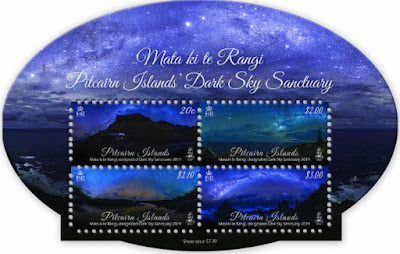 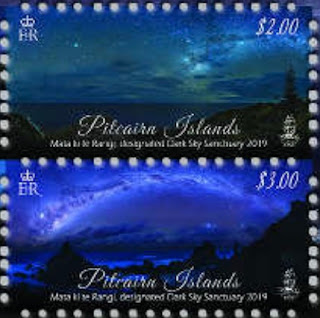 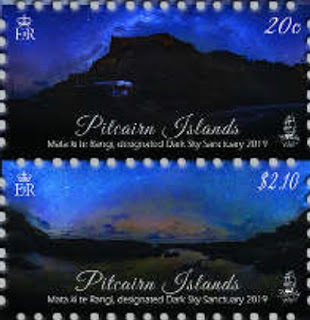 🇵🇬 Following on from Blog 1499 where I mentioned a set of 40 stamps depicting ‘Chinese traditional art - facial make-up’ issued by the Papua New Guinea postal service, I notice another item being offered for sale on an internet auction site along with the aforementioned stamps. This is a single stamp reproducing the 1968 People's Republic Of China stamp which celebrated the ‘Great Victory of the Cultural Revolution’ (the original stamp is depicted below the Papua New Guinea stamp). The US agency, IGPC, which has links with China and before has put out stamps on behalf of Grenada and elsewhere which look far more like Chinese stamps than anything ever used in the west, provides stamps for the Papua New Guinea and it seems likely that this stamp originates there.
Few countries feel it appropriate to celebrate Mao’s Cultural Revolution considering the deaths and destruction it caused and it is surprising if IGPC in Trump’s America is indeed complicit in the issuing of such an item for one of its client postal administrations.
Rating:- *****. 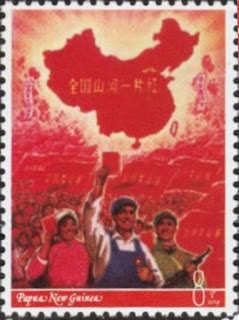 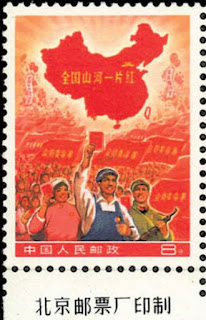 🇬🇬 Guernsey Post will issue 2 sets of stamps on 1 October 2019 to commemorate the 50th anniversary of its first postage stamps issued by its independent postal service and to commemorate that postal service’s 50th anniversary itself.
The first set is made up of 6 stamps with the ‘stamps on stamps’ theme with a reasonable set price of £4.47p though anyone who is swept away by the excitement of the anniversary is also able to buy a ‘limited edition gold replica’ of  the 1969 1/- definitive stamp which clearly has no postal validity as it has a pre-decimal face value. I assume there must be people out there who will find spending £45 plus at least £8 postage to be a very reasonable thing to do.
The second set commemorates the 50th anniversary of postal independence and is made up of another 6 stamps (set price £4.47p) and 1 miniature sheet containing all 6 stamps (price also £4.47p). The designs of both sets are colourful if nothing else and are by Joseph Smith (postal service set, lithographed by bpost) and Two Degrees North (Stamp anniversary, lithographed by Southern Colour Print) but rather cluttered. Rating:- ***. 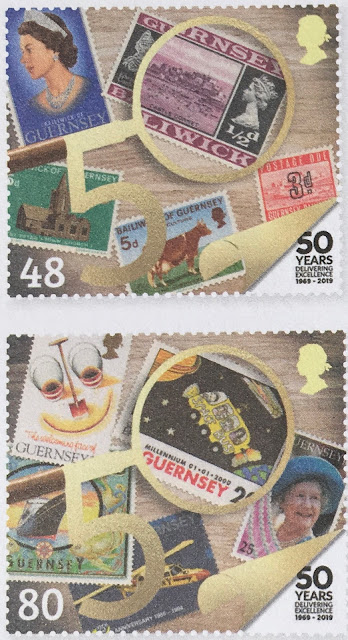 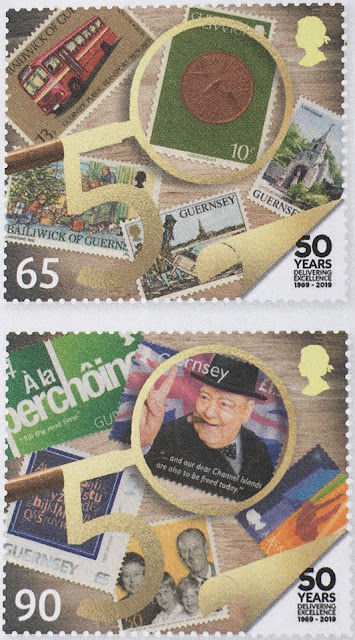 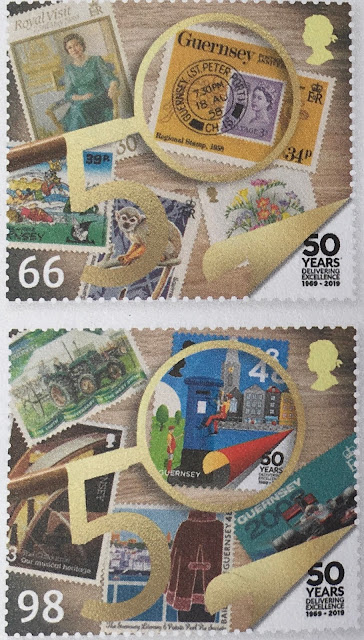 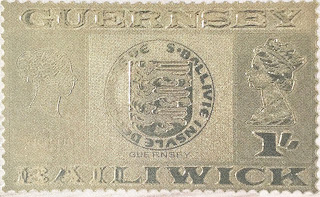 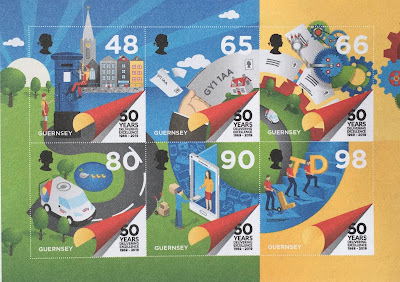