🇬🇧 The Postal Museum in London will issue new Royal Mail Post and Go stamps on 11 October 2019 to tie in with the museum’s new exhibition ‘The Great Train Robbery:Crime and The Post’ which centres on the  ‘Great Train Robbery’, then the biggest crime in British history which resulted in the unfortunate train driver being severely injured and the criminals becoming unacceptably glamourised subsequently. The crime took place on 8 August 1963 when the mail train travelling from Glasgow to London was held up at Ledbury in Buckinghamshire and the thieves got away with £2.6 million. In the course of the crime the train driver, Jack Mills, was beaten over the head with a metal bar and his injuries were so severe that he was forced to give up his work. Although the criminals were later glamourised as Robin Hood-like characters (which of course they were not) by the popular press, the gang was eventually rounded up and the ringleaders rightly sentenced to 30 years in prison.
To coincide with the exhibition The Postal Museum will dispense from 11 October 2019 from kiosk A001 the ‘Mail Coach’ stamps with the additional inscription ‘Crime & the Post’. Additionally strips of the ‘Mail by Train’ stamps will be sold in ‘limited edition’ packs (but NOT dispensed from the kiosk) with the added inscription ‘Great Train Robbery’ (mock-up depicted below). The packs may be pre-ordered from the Postal Museum from 4 October 2019. I do not yet know the price of the packs but such products from the museum are usually sold well above face value and as the packs will be the only source of the ‘Great Train Robbery’ stamps I find it hard to think of them as postage stamps given their very limited availability and more as yet another ‘collectible’ to be inflicted on stamp collectors.
And while I appreciate that these products are released to publicise the museum’s new exhibition, they may also be interpreted as being a philatelic glamorisation of a major and vicious crime which at the very least is a misjudgement by those who decide on the subjects to be featured on Royal Mail and Postal Museum Post and Go stamp issues. Rating:- 0.

🇯🇪  Jersey Post Post and Go kiosk JE03 will be moved temporarily from its home in the Jersey Post Headquarters in St Helier to the Radisson Blu Waterfront in St Helier where the 2019 PostEurop Plenary Assembly will be held from 8 to 11 October 2019. The Jersey Flag stamps will be dispensed from JE03 there and have the additional inscription ‘PostEurop Jersey 2019’. Rating:- **. A mock-up is depicted below:-

🇧🇿 Thanks to Gene W for being good enough to draw my attention to information on the Internet from the Belize government about the new set of stamps which celebrates the 30th anniversary of the establishment of diplomatic relations by Belize with The Republic Of China (Taiwan). The art includes very good illustrations of the two stamps and 1 miniature sheet containing 2 different stamps which I previously mentioned in Blog 1465. These are attractive items and the issue was apparently released on 12 September 2019. Rating:- *****. 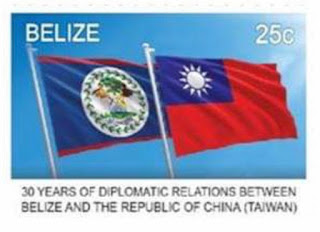 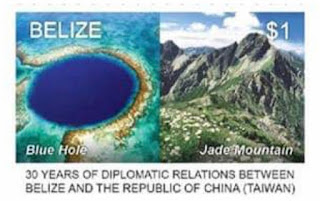 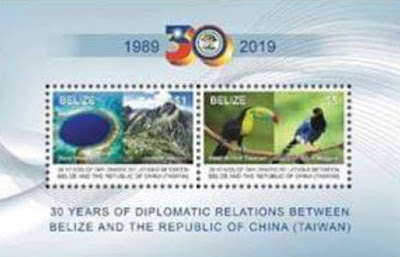 🇹🇹 T and T Post, the postal service of Trinidad And Tobago joined a number of other postal authorities in issuing a single stamp on 10 September 2019 to commemorate the Express Mail Service (EMS). This was the first stamp issue of the 2019 to have been issued by the Trinidad And Tobago postal service. Other territories normally featured in Commonwealth Stamps Opinion which are known so far to have released stamps in this worldwide joint issue include Cyprus, Malta, Maldives and Sri Lanka.Rating:- ***. 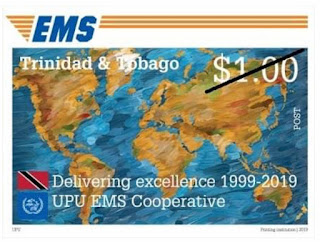 🇬🇧 I wonder why the shade of red used in the two Royal Mail miniature sheets issued on 26 September 2019 for the Queen’s head and cross of St George varies so much between the 2 sheets. While the shade of red used for the Women team’s victory is lighter and brighter, that on the Mens team’s victory is much darker. This is obviously intentional since the women’s stamp has its value printed in blue and the men’s stamp is in black. Interesting design choice. 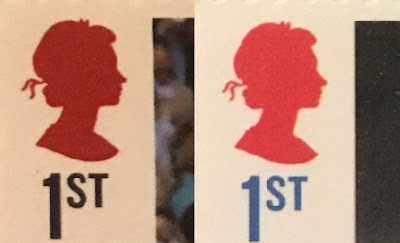 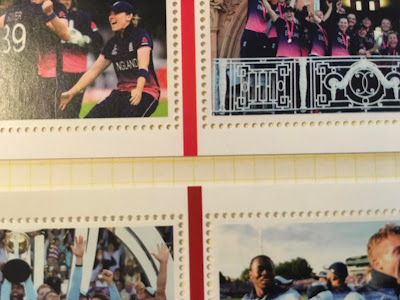