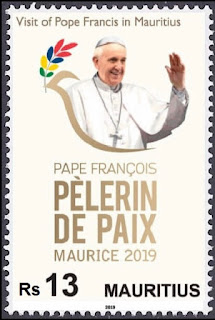 🇲🇺 Pope Francis is currently carrying out a visit to Mozambique, Madagascar and Mauritius. Mauritius Post will issue a single stamp on 9 September 2019 to commemorate the papal visit to the island. Rating:- ****.

🇲🇼 The dealer Nigel Haworth is currently selling a very interesting item from the Malawi postal service. The ‘Vultures Of Africa’ set which was issued on 3 December 2019 was thought to have been accompanied by 5 single stamp miniature sheets unusually (normally 6 such items are released per set) but it appears that a sixth miniature sheet was indeed issued but hastily withdrawn from sale after a few days as the included stamp did not have the value printed on it. This is an expensive item but an interesting addition to a Malawi or Birds collection. 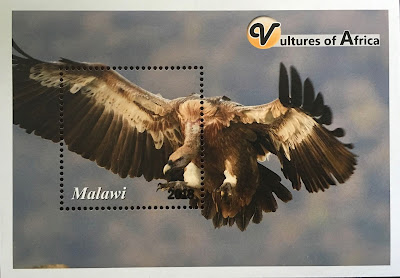 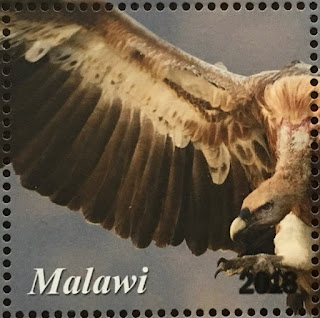 🇲🇹 MaltaPost will issue a single stamp on 10 September 2019 to commemorate the 20th anniversary of the Express Mail Service which was founded on 10 September 1999 at the Universal Postal Union Congress held in Beijing. The service is now operated by the postal services of over 200 territories and this issue is a joint issue with other UPU members including Côte D’Ivoire, Cyprus, Lebanon, Libya, Maldives, Mexico, Mongolia, Philippines, Turkey and the United Emirates.
The issue was designed by the UPU and lithographed by Printex and perforated 14. Rating:- ** 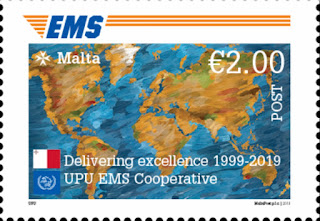