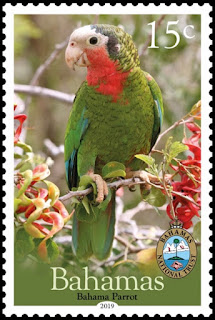 🇧🇼 The collecting of new stamp issues from Commonwealth postal administrations is frequently difficult and depressing - some postal services and some philatelic agencies produce floods of new stamps often poorly designed and printed and irrelevant in subject matter to the country whose name is printed on the stamps, often ridiculously expensive and sometimes very hard to track down.
I remember as a teenager in the sixties Commonwealth new issues mostly arrived at my stamp dealer’s shop with relative ease, were affordable (apart from the high face value definitives which needed to be obtained as special birthday or Christmas presents from kind and close relatives - one aunt specialised in buying for me the three or four sets of free-form self-adhesive stamps issued per year by Tonga at which experienced collectors then looked down their noses but which she found to be amusing items which solved the problem of what to buy her nephew on special occasions (and much appreciated they were too).
Now things are not so easy and a favourite aunt might baulk at the price of buying all the issues released in a year from many Commonwealth territories. But there are still some bright spots and possibly the brightest are those issues which are marketed by Pobjoy Stamps and the production of which is carried out by Creative Direction. The quality of production of these issues is excellent with frequently wonderful designs. Although some designs are mainly based on photographs rather than original art, the designer usually chooses wonderful photographs to be used in the designs and generally the stamps from this producer and agency rarely fail to delight.
Two new sets have been announced - one from Tristan Da Cunha (featured below) - and the other from the Bahamas postal service. The latter will be released on 10 October 2019 and will commemorate the 60th anniversary of the Bahamas National Trust. The set is made up of 4 stamps featuring some superb photographs and was designed by Bee Design and lithographed by Cartor and perforated 13.5. Rating:- *****. 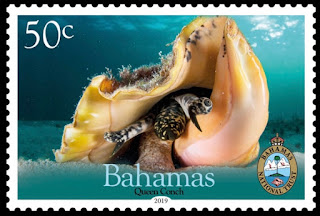 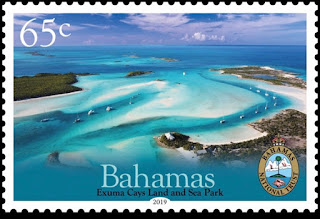 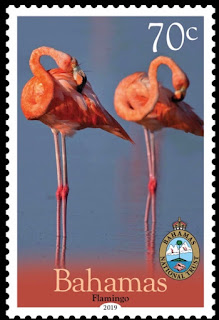 🇲🇲 The postal service of Myanmar will release a single stamp on 2 October 2019 to commemorate the 150th anniversary of the birth of Mahatma Gandhi. An attractive and straightforward issue. Rating:- ****. 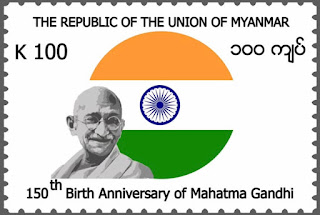 🇸🇭 The postal service of Tristan Da Cunha will issue a charming set of 4 stamps on 1 October 2019 which will feature children’s artwork on the subject of ‘Through Their Eyes’ - life and scenery around the island as depicted by local children. This is a very pleasing set and was designed by Bee Design and lithographed by Cartor and perforated 13.5. Rating:- ****.
Thanks to Juliet Warner of Pobjoy Stamps for information about the Bahamas and Tristan Da Cunha issues. 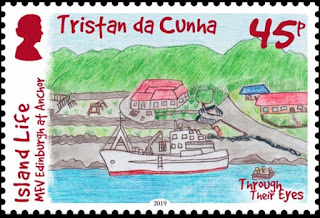 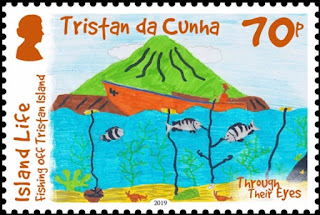 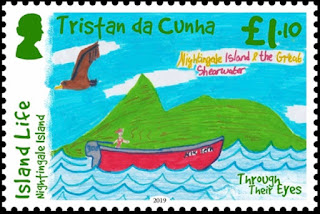 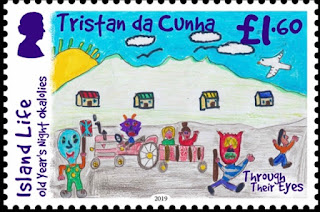