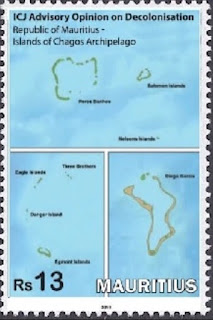 🇲🇺 Mauritius Post issued a pair of stamps on 23 August 2019 to again stake a claim philatelically to the Chagos Islands otherwise known as the British Indian Ocean Territory (see Blog 1137). This time the issue commemorated the decision by the International Court Of Justice in The Hague which declared that continuing British occupation of the islands was illegal because they had been detached from Mauritius in the 1960s and that resulted in the decolonisation of Mauritius being incomplete.
Whilst it was true that the British ruled the islands from Mauritius that is not the same as the islands being part of Mauritius. Nevertheless the new stamps feature maps of the Chagos Islands from which the British cruelly expelled the local inhabitants in the 1960s to enable them to build an enormous base on the island of Diego Garcia which is used by the United States Air Force. Despite the Court’s ruling it seems unlikely that the Americans will abandon Diego Garcia in the foreseeable future nor are the British likely to hand the Chagos Islands over to Mauritius any time soon.
From the point of view of the British, stamps inscribed ‘British Indian Ocean Territory’ continue to be released (though not so far in 2019) including a bizarre Christmas set from last year depicting, somewhat improbably, penguins and snow, and these ‘BIOT’ stamps emphasise continuing British sovereignty over the Chagos Islands.
This is a fascinating international diplomatic conflict fought out if only in small measure by postage stamps but which highlights that stamps still have a role to play as propaganda (see Blog 1489) apart from making money for postal services and philatelic agencies or serving as receipts for the prepayment of postage. Rating:- *****. 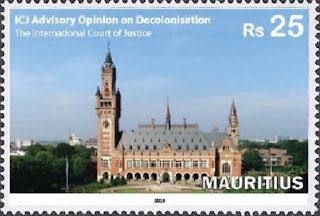 Mauritius Post also issued a single stamp on 23 August 2019 to commemorate the Tercentenary of the Birth of the aptly named Pierre Poivre, a French horticulturist who introduced spices to Mauritius and founded the island’s botanical gardens. Rating:- ***. 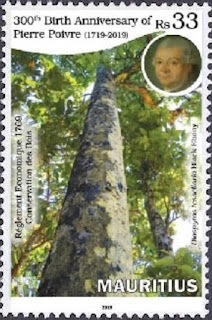 🇲🇿 In Blog 1473 I mentioned 2 stamps from the postal service of Mozambique which were issued in 2018 to commemorate the inauguration of the joint Mozambique-People’s Republic Of China Maputo-Katembe bridge project. It appears that this was a rather larger issue than was thought as an internet dealer has recently had a complete set of the issue for sale on an auction website. The issue appears to be made up of 2 panes each containing 12 different x 32.00 MT stamps plus 3 identical undenominated labels all showing various views of the bridge. This is clearly a locally produced issue rather than a Stamperija confection. A highly desirable item I would have thought. Rating:- *****. 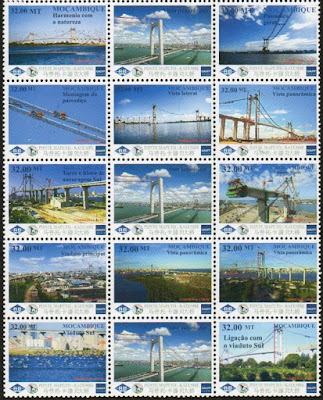 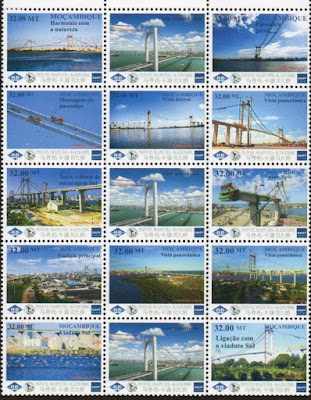 There is also a previously unseen ‘real’ stamp from Correios Moçambique which seems to have been issued in 2017 to commemorate the 25th anniversary of INCM (Instituto Nacional das Comunicações de Moçambique - National Communications Institute of Mozambique).
Rating:- *****. 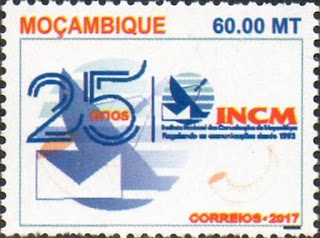 Another ‘real’ stamp from Correios Moçambique I have not previously mentioned, having not been fully aware of its existence though stewie1911 mentioned it in a comment after Blog 1181, is another World Vision stamp which appears to date from 2011. Like most ‘real’ recent Mozambique stamps this currently seems to be as rare as hens’ teeth though one never knows if someone is sitting on a stock of them ready to unload on to the market though in this case I think that’s probably very unlikely. As a rarity - Rating:- *****.
See also Blogs 1181 and 1246. 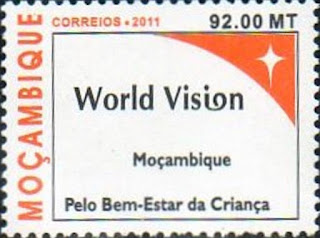