Jersey Post remains as ambitious as ever for the sale of its "Post And Go" labels.
The JE01 kiosk will be present at the Sindelfingen International Stamp Fair from 29 to 31 October 2015. This is Jersey Post's first foray to the annual show in Germany where I suspect "Post And Go" labels have retained their popularity unlike Britain where they are, for many collectors, merely a source of annoyance.
For the 3 days of the Stamp Fair the "Jersey Flag" labels will be sold with an additional inscription, "Sindelfingen October 2015", alongside the Wildlife labels which will be dispensed without any additional inscription. Of course none of the items dispensed at the exhibition will have any postal validity in Germany. The Jersey Post stand will also be selling previously issued "Post And Go" labels dispensed from kiosk B002.
But it doesn't end there. Back at home in Jersey, JE02 will dispense Collectors' strips of 6 Flag stamps with the additional inscription "RAFA Jersey 90" for a period of 1 month from 30 October 2015.  These products commemorate the 90th anniversary of the Jersey Royal Air Forces Association. This news gives us 12 new "Post And Go" labels/stamps from Jersey Post.

It's really not obvious to me why so many "Post And Go" labels have military links. Perhaps people who collect the labels/stamps are especially interested in military subjects. If that is the case then Royal Mail's upcoming releases will thrill such collectors. The military museums - all four of them - which have "Post And Go" kiosks sited at them will begin to dispense numerous new versions of their labels from the 19 October 2015.
Intelligent A R's announcement regarding these items is a little difficult to follow but it appears that the NMRN (National Museum of the Royal Navy), RMM (Royal Marines Museum), FAAM (Fleet Air Arm Museum) and RNSM (Royal Navy Submarine Museum) will remove the present abbreviations featured on the Post And Go labels and replace them with the respective inscriptions:- Royal Navy, Royal Marines, Fleet Air Arm or RNSM Submarine each accompanied by a relevant logo for the particular site. These inscriptions will be used only on the Machin Head designs while the Union Jack designs will be dispensed with the present abbreviations replaced with the name of the particular museum but with no logo.
So far, that gives us 48 new museum labels but the Royal Navy and Royal Marines kiosks will also dispense Union Jack labels with a "Trafalgar Day" inscription from 19 October to 15 November 2015.
Hence in a short period these 4 museums will be producing 60 new labels for collectors to buy.

Royal Mail, like Jersey Post, will be present at the Sindelfingen exhibition from 29 to 31 October 2015 and its kiosks, A007 and A009, are said to be going to dispense labels in the Union Jack, Machin Head, Heraldic lion and Poppy designs and there will be an additional inscription, "Sindelfingen October 2015" though whether that will be applied to all the designs is not stated. That gives us a theoretical total of another 24 new labels.
But there's more! Kiosks A007 and A009 will then be off to Paris for the Salon Philatelique d'automne from 5 to 8 November 2015. It is said that 4 different types of label will again be dispensed - the Union Jack, Machin Head, Poppies and Heraldic lions - the inscription will be "Paris November 2015". Another 24 potential new labels.
Collectors' strips of 6 will be issued at both European exhibitions but there will also be "European Collector" strips of 4 stamps (1st class, Euro 20g/World 10g, Europe 100g and Worldwide 20g).
It doesn't end there. Royal Mail will be tripping off to Hong Kong for the 31st Asian International Stamp Exhibition from 20 to 23 November 2015 taking kiosk A007 along with it. Strips of the Hong Kong design from  the "Sea travel" Post and Go issue will be dispensed along with the Union Jack design. The added inscription will be "Hong Kong November 2015" though whether or not that will be applied to both designs is not clear. A potential further 12 labels could result from this trip to the Far East.
Oh, and the Royal Gibraltar Post Office will also be tripping off to Hong Kong with kiosk GI04 though we do not yet know if the Gibraltar Flag labels will be dispensed there with an additional inscription.
Also from the Royal Gibraltar Post Office kiosk (GI01) located in London, further labels will be dispensed from 9 to 19 October 2015 with an added inscription to commemorate "Gibraltar Day". That issue will then be replaced by a Trafalgar Day inscription in use, like the Royal Navy museums, from 19 October to 16 November 2015.
The 2 Gibraltar-based kiosks, GI02 and GI03, situated at the Main Post Office and Parcel Office and already with their own site-identifying inscriptions, will have additional "Trafalgar Day" inscriptions added to them from 19 October to 16 November 2015.
This appears to add at least 36 new Gibraltar Post And Go labels/stamps during October and November, not including whatever will emerge in Hong Kong and if the Trafalgar Day inscriptions are added to 12 values from both Gibraltar-sited kiosks.

Back in Britain, yet more new "Post and Go" stamps/labels in the form of the Poppy only Collectors' strips but with a new code - MA15. These will be sold at ordinary post offices (NMR format) and Enquiry offices and the BPMA (British Postal Museum and Archives) (IAR format) - resulting in another 12 stamps/labels. The Poppy labels will be on sale at the BPMA from 19 October to 15 November 2015 after which the Heraldic lion strip will be reintroduced to the kiosk there.

I think that this updates the "Post And Go" issues for the present and it means that there possibly could be about 186 new stamps/labels released from Royal Mail + Jersey Post + Royal Gibraltar Post Office during the 2 month October/November period (we must also add the Royal Mail "Winter Fur and Feathers" stamps mentioned in Blog 645).
Singapore Post has issued an interesting sheetlet of Personalised stamps which depict a curiously named subject, "Spineless Champions" - that is - various local invertebrates very beautifully illustrated on labels attached to the 9 stamps all of which depict a dragonfly. Particularly notable is the very large label attached to 3 of the stamps which depicts a colourful but very large spider which is shown creeping along through a forest. Many of us with spines may feel a shiver going down them at the sight of such a creature. 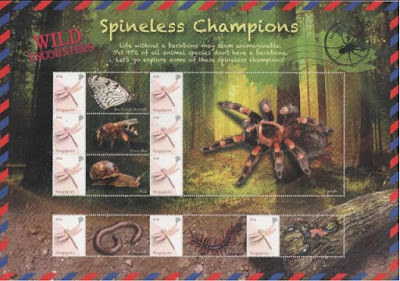 I have not illustrated previously the miniature sheet issued by the Anguilla postal administration on, I think, 29 May 2015, which commemorated the Anguilla Day Around The Island sailing race (see Blog 591). The set seems to have been made up of 6 stamps from ordinary sheets as well as the illustrated miniature sheet which contained 5 different stamps. Rating:- ****.