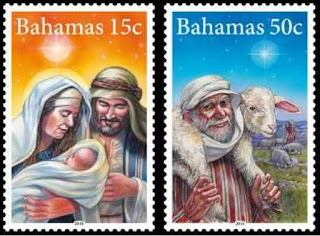 The Bahamas Post Office will issue a charming set of 4 Christmas stamps on 19 November 2015 on the subject of the Nativity. The set was designed by the excellent Robin Carter (see also Blog 657) and lithographed by Cartor.The stamps have some wonderful art and the shepherd in particular has a face full of character. The faces look as though they are portraits of real people and I just wonder if a similar set, but using portraits of Bahamians, might be issued in a future year. It is not surprising that such an excellent issue again comes from the Pobjoy Stamps/Creative Direction philatelic agency. Rating:- *****. 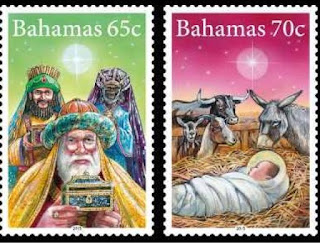 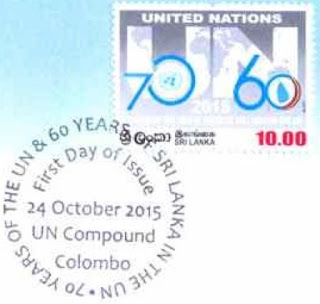 The Isle Of Man postal administration has found another excuse to issue yet more stamps - this time 8 stamps will be released on 21 January 2016 to commemorate the 150th anniversary of the Royal Aeronautical Society. The issue does not seem to have any direct relevance to the island and so I shall not be adding it to my Isle Of Man collection. Rating:- **. 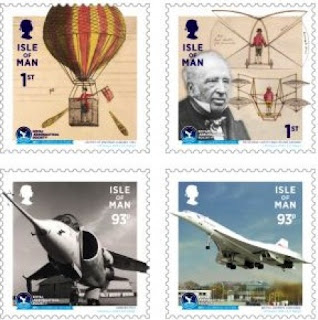 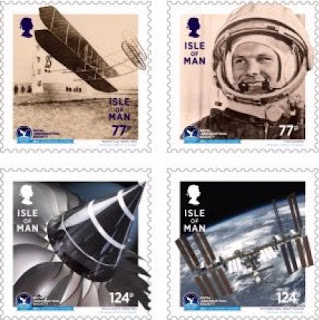 In Blog 653 I mentioned that the Royal Mail Christmas issue would include a 12 x 2nd Class booklet but failed to mention that there will also be a 12 x 1st Class booklet (cost £7.56p).:-

Jersey Post continues to pull out all the stops in an effort to make money from philatelic products. Clearly the 90th anniversary of the Jersey branch of the Royal Air Force Association (RAFA) is an important event on the island since not only has it necessitated the issue of a set of Post And Go labels  (see Blog 646) but it also issued a "Commemorative Sheet" - cost £14.10p - to mark the anniversary on 30 October 2015. The sheet is made up of 20 x "Crest of Jersey" self-adhesive stamps from the  "My Moments" issue with attached labels. Rating:- 0. 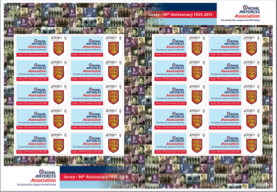 Meanwhile the "Post And Go" "Collectors' Strip" on the same subject will be issued on 30 October 2015 one day after the "Collector's Strip" issued at the Sindelfingen Stamp Fair (see Blog 646). Rating:-0.

In Blog 651 I mentioned the upcoming Christmas issue from Guernsey Post which is inscribed "Alderney".
The set of seven stamps which features stained glass windows in St. Anne's Church in Alderney commemorate Anne French, a tireless worker on behalf of children both locally and abroad. The set will be released on 6 November 2015.
Guernsey Post will also issue a set of 6 stamps and a miniature sheet inscribed "Alderney" on 10 November 2015 to the commemorate the 70th anniversary of the homecoming of the islanders after their exile during World War II. The interesting and attractive issue was designed beautifully by Robin Carter and lithographed by Lowe-Martin. Rating:- *****. 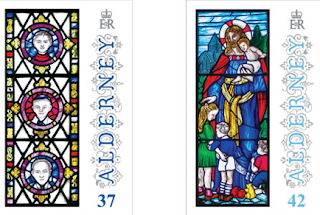 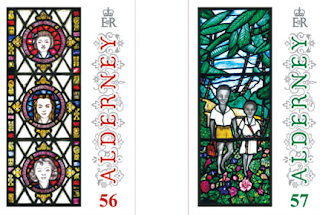 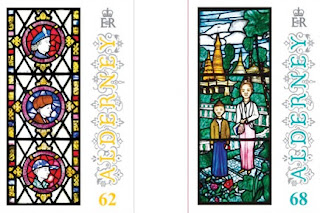 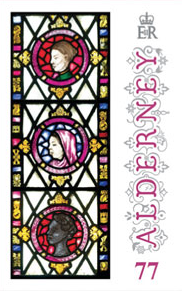 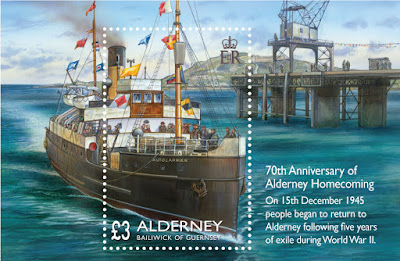