The website of Bounty Post, the Pitcairn Islands postal administration, features an excellent set of new stamps which is to be released on 15 October 2015, the 75th anniversary of the issue of its first postage stamps. The set of 10 stamps reproduces the original designs of the 1940 issue with new face values and additions to the designs to update the stamps:- the royal cypher of Queen Elizabeth II and a little cameo of HMS Bounty which Bounty Post uses as a logo. There is also an inscription "CELEBRATING THE 75TH ANIVERSARY OF THE FIRST STAMP ISSUE, 1914-2015" (see below).
The stamps were designed by Denise Durkin and lithographed by Southern Colour Print (how wonderful it would have been if the stamps had been printed in intaglio as was the original set - given that the total face value of the issue is $29.90 perhaps the Pitcairn Post Office could have afforded the extra cost and given us (or sold us) a truly great set.
But there seems to be a problem. The designs of stamps and first day covers on the Pitcairn website all include a glaring error - the word "anniversary" in a panel at the bottom of all the stamps and covers is spelt "aniversary". Oops! It may be that this error is just present on items used for pre-issue publicity and that the issued items will have the correct spelling. It will be interesting to see what appears on the philatelic market in the next few days. Rating:- **** (***** if it had been printed in intaglio) 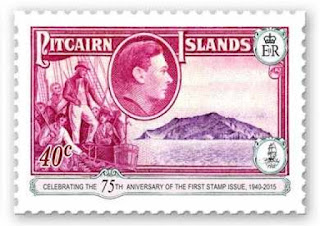 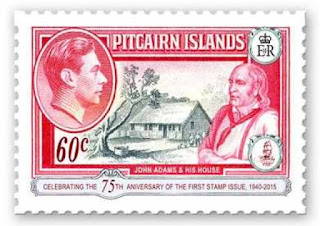 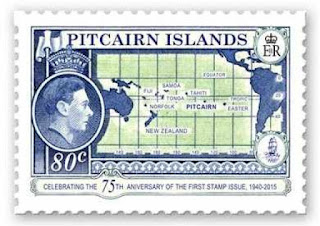 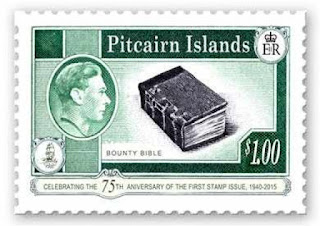 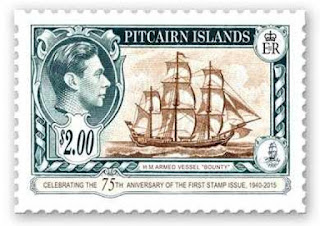 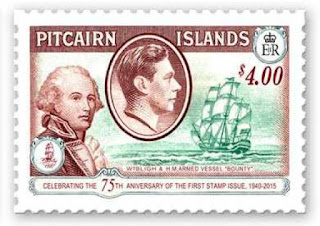 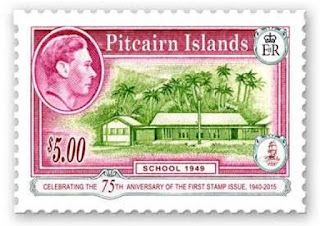 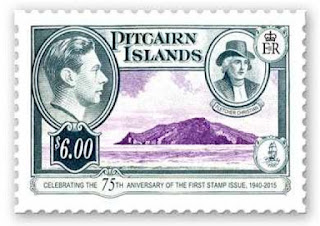 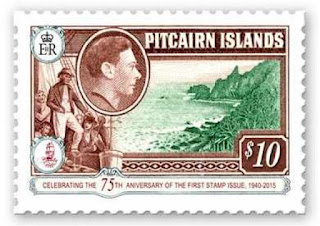 The Q Post "Post And Go" kiosks (I'm guessing both QA01 and QA02) are now located at the Qatar General Post Office in Doha having been set up there on 4 October 2015 after the completion of their attendance at the 29th GCC Exhibition from  29 September to 3 October (see Blog 643). Presently I can not find any dealers offering these for sale on internet auction sites (although the Stamp Exhibition labels are on offer) nor does Q Post mention its new "Post And Go" stamps on its website or Philatelic sites far as I can see. Rating:- ***** (because of the issue's significance).

Guernsey Post will issue a worthy set of 6 stamps as well as a "Prestige booklet" on 11 November 2015 as the second part of its series which commemorates the Centenary of the First World War. This issue fittingly highlights the role of the general post office in the war with a particular emphasis on the post office in Guernsey.
The 42p value depicts Philip Carre, a postman from Sark, who joined the Royal Guernsey Light Infantry and returned to Sark to return to being a postman when the regiment was demobilised in February 1919. Meanwhile the 77p depicts another local postman who joined the RGLI and postmistress, Ethel Bynam, who married each other after the war in 1922. This stamp is of interest to collectors of "Stamp on stamp" themed issues as it depicts a King Edward VII penny stamp placed at an angle which signifies "longing to see" (that's new to me and very interesting).
Other featured subjects are the mail boat "Vera" (56p), young Guernseymen who served in the 8th Battalion of The Post Office Rifles (62p) and post of the period (57p and 68p). An excellent issue. Rating:- *****.