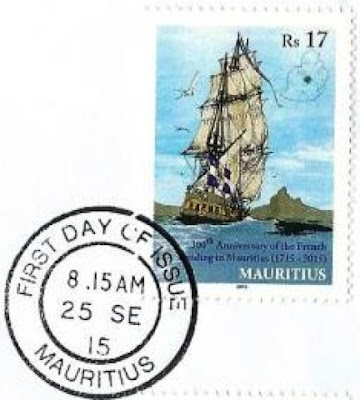 Mauritius Post and La Poste released a joint issue on 25 September 2015 to commemorate the tercentenary of the first French landing on the island. The stamp was designed by Frank Bonnet and depicts the ship, Le Chasseur, which was commanded by Guillaume Dufresne d'Arsel, off the coast of Mauritius on 20 September 1715. The Dutch had been in the island since 1598 and given it its name but had departed in 1710.
In the distance, as the ship approaches Mauritius, the design features the Rempart Mountain and white tailed tropic birds fly around the ship. For vexillologists, the ship is said to be flying the then French merchant flag as ensign. This was used until 24 October 1790 when a new ensign was introduced which was a white field with a revolutionary Tricolour placed at the canton (upper left quarter).
The French took over Mauritius in force and introduced the sugar cane industry to the island along with the introduction of thousands of slaves to provide labour. The island remained a French possession for almost 100 years until the British captured the island in 1810 during the Napoleonic Wars.
Rating:- *****. 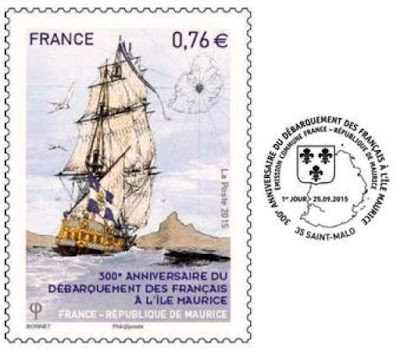 Royal Mail's Post And Go stamps give collectors many opportunities to have a grumble about them, especially about what is perceived to be grossly excessive numbers of issues being placed on the market. But it's hard to complain about the designs of the pictorial Post And Go issues which have appeared over the last few years. This year's Christmas issue is now shown on the Internet and is on the subject of "Winter Fur and Feathers" (though more fur than feathers) and the four designs depict beautifully 3 British species of mammal and 1 bird.
The 3 mammals are the Hare in winter coat, the Fox and the Red Squirrel while the featured bird is the Redwing - all are pictured in snowy scenery. These are lovely designs and will look very attractive on envelopes sent containing Christmas cards - I think I shall apply them to my Christmas post in preference to the ordinary Christmas stamps which will be released by Royal Mail. The Winter Fur and Feathers stamps will be issued on 16 November 2015, being dispensed from NMR kiosks situated in post offices and in packs from the Philatelic Bureau. They will also be sold from the IAR kiosk at the British Postal Museum and Archives (BPMA) from 16 November 2016. Hence the 4 designs actually provide us with 12 new stamps/labels though as a single site product with limited sales period I prefer to call the BPMA products "Museum souvenirs" rather than postage stamps so I shall only buy the post office-vended NMR items plus the Philatelic Bureau pack which will save me a little money. Still these items are a great pleasure and I look forward to seeing them in my collection. rating:-*****.