And Crispin Crispian shall ne'er go by,
From this day to the ending of the world,
But we in it shall be remembered -
We few, we happy few, we band of brothers....
Henry V Act IV Scene 3. 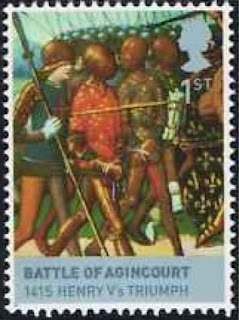 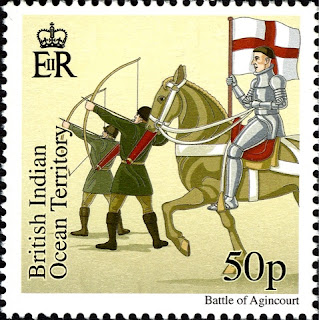 Although Royal Mail has not considered that the subject is worthy of a stamp issue, 25 October 2015 is the 600th anniversary of the Battle of Agincourt, one of the most celebrated events in English history and the centrepiece of William Shakespeare's play, Henry V.
For hundreds of years English monarchs had the delusion that they also ruled France which they never did, excepting that the child Henry VI was crowned King of France on 26 December 1431 although his commanders could not hold on to the territory for anything more than the short term. He was the grandson of the usurper, Henry IV, and the Lancastrian dynasty's legitimacy was open to challenge from the date of Henry IV's accession.
When Henry IV died, he was succeeded by his son who became Henry V who needed to secure his inheritance. He reburied Richard II to show respect to the king whom his father had deposed and then cast about himself for a cause célèbre to unite his nobles behind him. What better than to pick on an external enemy - the French - and to renew the claim to the throne of France and seek military glory?
After taking the port of Harfleur and a march across northern France during which the ranks of his soldiers grew increasingly depleted and weakened by illness, an enormously superior French army was able to cut off Henry's route to Calais from which he intended to return his army to England. The armies met near the village of Agincourt on 25 October 1415 (the Day of St. Crispin Crispianus).
The outcome of the battle was a victory for the English who were able to slaughter the French knights and nobles by raining down arrows on them shot by longbow men. The battle has become the stuff of legend in English folklore - so few Englishmen died that day compared with the heaped piles of the French dead.
After a further invasion when Henry took advantage of a civil war among the French, the English king claimed France for himself and married Catherine of Valois, the French King's daughter. It was agreed that Henry would succeed Charles VI on his death but in all events, Henry's death preceded the French king's demise and so it was Henry's and Catherine's infant son, Henry VI, who became the only English monarch ever to be crowned King in both England and France. The English grip on France was already loosening by then. 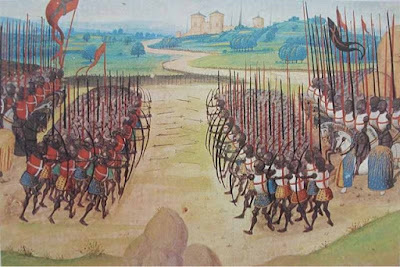 Henry V has made a remarkable number of appearances on stamps. The first was issued on 10 July 1974 and depicted the king on a charging horse. The stamp was designed by Firtz Wegner and printed in photogravure by Harrison and Sons.
This is an interesting issue, depicting, as it does, medieval warriors (the set also includes charging mounted depictions of Owain Glyndwr, Robert The Bruce and Edward The Black Prince) since Royal Mail has long shied away from portraying and commemorating important British personalities of pre-Tudor times, especially if they are engaged in warfare, and preferring to issue stamps which depict characters of the 19th - 21st centuries who are notable for their involvement in social reforms or popular culture. Perhaps they are right in doing so - I can't decide but I remember as a schoolboy I loved to hear and read about "knights in armour" and good and bad kings - perhaps our own medieval heroes have now been substituted for by Star Wars Jedi knights who, like Henry V and the Black Prince, wield swords (well, light sabres at any rate) and charge into battle against evil tyrannical rulers. For Henry V substitute Luke Skywalker.
The first of the "Kings and Queens" sets - "The Houses of Lancaster and York" - featured a portrait of King Henry V which is said to date back to the late 16th or early 17th century and which is to be seen in the National Portrait Gallery. The stamp was issued on 28 February 2008. It shows Henry V facing to the left of the painting, perhaps to hide a monstrous scar on the right side of his face which resulted from an arrow injury sustained during the Battle of Shrewsbury.
This portrait is also featured notably on 1 of the stamps in the Barbuda Kings and Queens which was issued on 15 June 1970 and again, the same portrait appeared on 1 of the stamps issued by St. Vincent in 1977 to commemorate the Silver Jubilee of Queen Elizabeth II (the stamp also included a portrait of his father, Henry IV, and his son, Henry VI) 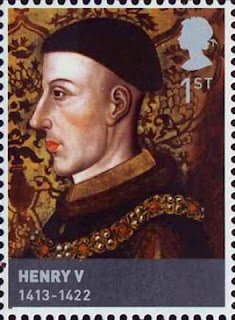 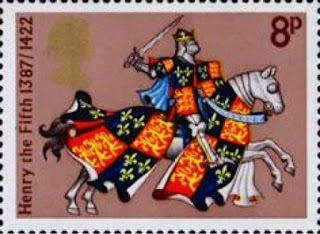 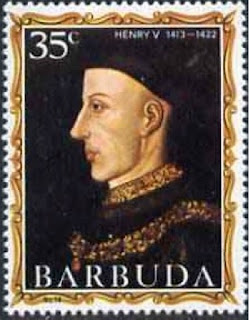 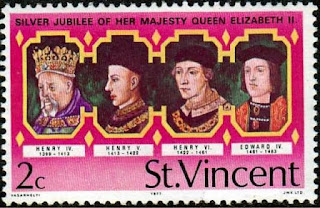 I think that the first image of Henry V which appeared on a postage stamp is that which was shown on the 1/6d value of the set of 5 stamps issued by the British Post Office on 23 April 1964 to commemorate the quatercentenary of the birth of William Shakespeare. The design depicts the scene from Shakespeare's play in which the king is praying prior to the Battle of Agincourt. In addition there is a spectacular error of the stamp in which the printing is severely shifted to the right giving the effect of a white, ghostly king.
The role of Henry has been played by a number of distinguished British actors over the years - notably Sir Laurence Olivier (1907 - 1989) in the 1943 movie version. The actor is depicted as he appeared in the film on a Le9 stamp issued by Sierra Leone in 1990 (as part of a set which commemorated Olivier). 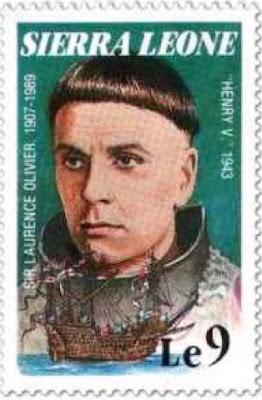 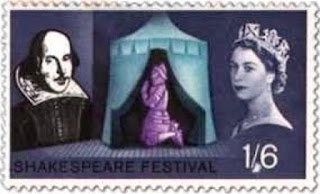 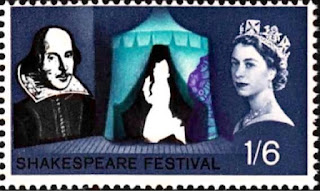 Henry V, then the Prince Of Wales and called Prince Hal, also appears in 2 of Shakespeare's other plays - Henry IV Parts 1 and 2. Another stamp from Sierra Leone features the scene from Henry IV Part One where Henry is seen as a wild youth and engaged in robbing Falstaff and his hangers-on of the ill gotten gains they themselves have made from a robbery:- 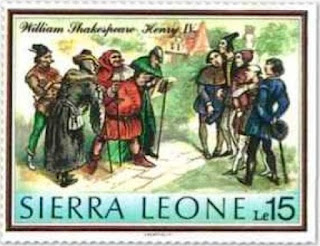 The Battle of Agincourt itself is featured on 2 stamps depicted at the head of this piece. The first is one of 4 stamps included in a miniature sheet which accompanied the 2008 Royal Mail "Houses of Lancaster and York" stamps and the second is from a set of 12 stamps on the subject of battles fought by British forces which was issued by the British Indian Ocean Territory in 2010.
The design of the latter is rather odd as the artist has transplanted a copy of the 17th century portrait of Henry on to a stylised body in a suit of armour sitting on a horse with 2 archers in the background. The overall effect is not very satisfactory and the subject of the stamp is very remote from BIOT.

So Englishmen everywhere - on 25 October, do not forget to raise a glass to "England, Harry and St. George"!
As for me I shall be sitting in the audience at the Royal Shakespeare Theatre in Stratford-upon-Avon watching the season's closing performance of "Henry V" on the very anniversary of the Battle of Agincourt. And before that, a great Sunday lunch of good English roast beef. What better?