Vanuatu Post will issue a set of 4 stamps on 29 October 2014 on the subject of "Extreme in Vanuatu" - that is - 'extreme sports' in which tourists participate when vacationing in Vanuatu. The action-filled designs are by Denise Durkin and the stamps were lithographed by Southern Colour Print:- 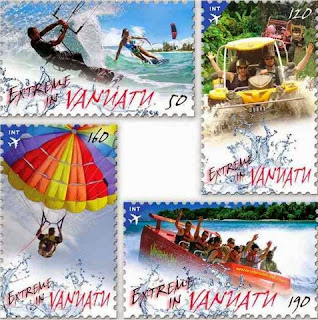 Australia Post will mark Christmas 2014 by issuing 2 "religious" gummed stamps (65c and $2.55) with a gummed miniature sheet ($3.20) as well as 2 "religious" self-adhesive stamps from a booklet (20 x 65c [$13] and a sheetlet (5 x $2.55 [$12.75]). In addition there will be 4 "secular" gummed designs (2 x 65c, 70c and $1.70) along with 3 self-adhesive stamps from booklet (2 from a booklet of 20 x 65c [$13] and 1 from a booklet of 5 x $1.70 [$8.50]). Two of the "secular" designs will also be issued in "enhanced" format and produced in 2 separate sheetlets (each sheetlet consisting of 10 x 65c [$6.50 each]). This seems to mean that Australia Post has produced 13 new stamps and 1 miniature sheet for collectors to track down in this issue.
Collectors will draw their own conclusions about this outpouring and give thought to the singularly uninspired "secular" designs as depicted below. The face value of the various gummed stamps and miniature sheet and sheetlets and booklets totals $70.35 (£38.48) which makes a nice Christmas present for Australia Post if a collector felt unable to resist buying one of each. The designers of these products are Andrew Hogg Design (religious) and Jo Mure (secular) and the issue was lithographed by McKellar Renown (religious) and EGO (secular):-

Meanwhile a number of issues from Southern Africa are awaited but the dealer who supplies me with my sets, Richard Schutte who provides an excellent new issue service for the region's stamps, has been unable to despatch them to me because of an ongoing and long-running postal strike at the South African Post Office. He tells me that he himself is waiting to receive supplies of new issues from Malawi - 2 sets on the subjects of World Population Day and the 50th anniversary of Independence as well as a booklet of definitive stamps, from Botswana - on the subject of Forestry and an issue from Zimbabwe which also commemorates World Population Day.