484. The Solomon Islands And Global Cooling And Philatelic Floods From Jersey.

Facts About The Solomon Islands:- 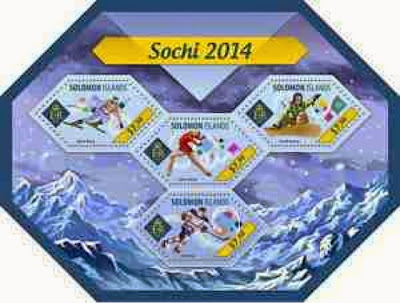 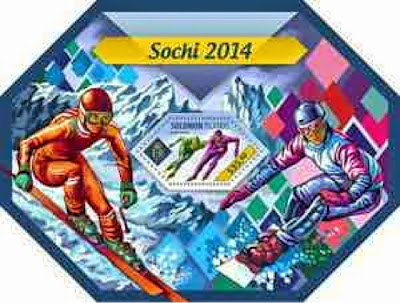 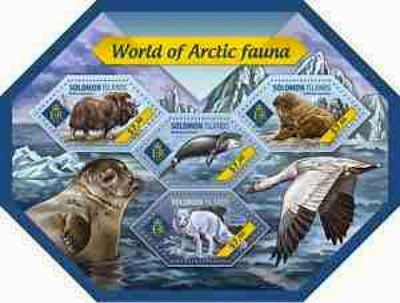 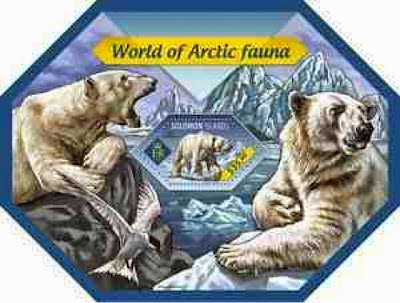 Given the emphasis on the arctic and winter sports one might suspect that this near-equatorial state is experiencing global cooling rather than the recognised problem of global warming. Who buys this stuff? The total face value of the above is $630 (Solomon Islands dollars) which is currently equal to £52.79p!
If my arithmetic is correct, Stamperija has so far issued 232 "stamps" and 58 miniature sheets (grand total: 290 items) in the name of Solomon Islands so far in 2014.
Moving from a Pacific territory which has allowed its national and philatelic reputation to be ruined to another which continues to produce excellent stamps as part of an interesting but conservative annual philatelic programme - Norfolk Island. It's 2 latest issues are:-
22 July 2014 - Joint issue with Australia Post - 2 stamps:-

15 August 2014 - 35th anniversary of Quota International (a philanthropic society) in Norfolk Island 3 stamps. Both of these modest, excellent sets depict views of Norfolk Island (apart from the 20c value of the Joint Issue):- 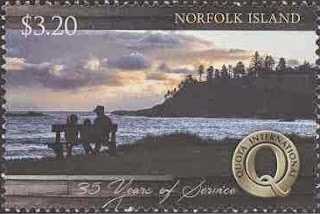 The last Post And Go stamps of 2014 from Royal Mail will be issued on 13 November 2014 and feature "Winter Greenery". The special pack features only 4 values on this occasion, as depicted below (perhaps Royal Mail has been listening to collectors' ongoing complaints about excessive issues), but the proper postage stamps will of course be those obtainable from machines situated in real post offices. The stamps were designed by Kate Stephens and printed in photogravure by International Security Printers:- 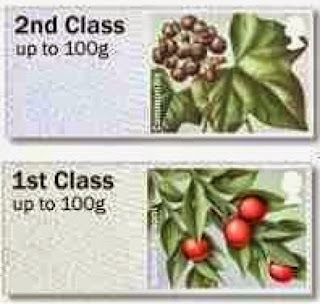 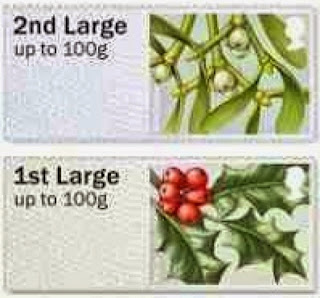 Canada Post will issue 4 self-adhesive stamps from booklets and 1 gummed miniature sheet on 23 October 2014 for use on the Christmas mails. Three of the designs feature Santa Claus and are by Christiane Beauregard who is quoted as saying that she wished to "evoke Santa Claus with a poetic spirit". The stamps were lithographed by Lowe-Martin.
The fourth design, by Louise Methe, depicts the painting La Virgen y El Niño Con San Juan Batista by the Flemish painter, Abraham Janssens van Nuyssen, which is to be found in Notre Dame de Quebec which this year celebrates the 350th anniversary of its founding by Bishop Francois de Laval:-

Although Canada (population 35.3 million) requires only 4 different stamps to use on its Christmas mail, the small island of Jersey (population  99 thousand) apparently needs to release 8 different stamps for its customers to use on their Christmas post. In consequence, Jersey Post will issue its much larger set of Christmas stamps on 27 November 2014. Like the Canada set, the Jersey issue will feature the subject of Father Christmas. The stamps were designed by Sharif Tarabay and lithographed by BDT International:- 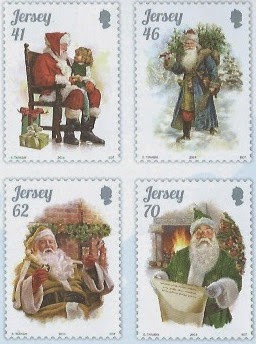 In Blog  472 I mentioned the set which Jersey issued on 9 October 2014 on the subject of Oyster fishing and I now illustrate the miniature sheet which accompanied the set of 4 stamps:-

Likewise, I also now illustrate the miniature sheet which will be issued on 30 October to accompany a set of 4 stamps on the subject of Pirates and Privateering (see Blog 478):- 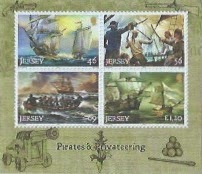 Despite all of the above, Jersey Post has not yet given up the ghost on 2014 issues as it will also release a set of 12 stamps on 12 November 2014 on the subject of "My Moments" - Greetings stamps. The stamps were designed from photographs by Andy Le Gresley and lithographed by Cartor. Eight of the 12 stamps are depicted below.:- 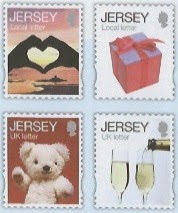 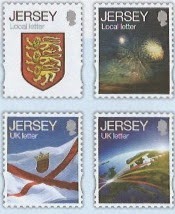 According to my calculations, Jersey Post has therefore issued 86 stamps (plus 9 miniature sheets, 1 prestige booklet and 30 Post And Go labels - total 126 items) during 2014 with a total cost in Jersey of   £121.78 to which Value Added Tax must be added if the stamps are sold in The United Kingdom. Apart from the quality of design, the situation is rapidly approaching where the rampant issuing of stamps by Jersey Post will make it indistinguishable from Stamperija and that prospect is something for Jersey to be proud of, I'm sure. Still as long as stamp collectors are ready to part with their cash, why should Jersey Post worry about the island's lost long-established philatelic reputation? Jersey will not be the only offshore island to sacrifice its philatelic self-respect for cash in the till. I suppose that's the reality of the modern philatelic business.