Guernsey Post will issue 2 sets of 7 stamps for Christmas on 6 November 2014 and both sets use artwork by local school children as the basis for their designs. The "Guernsey" stamps are self-adhesive and were lithographed by Cartor:- 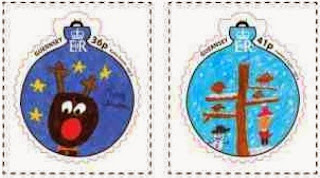 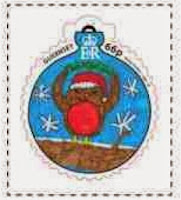 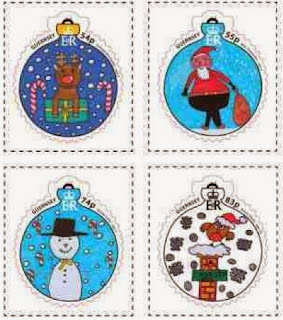 The stamps which are inscribed "Alderney" are gummed and were printed in lithography by Lowe-Martin. The theme of both sets is "What Christmas Means":- 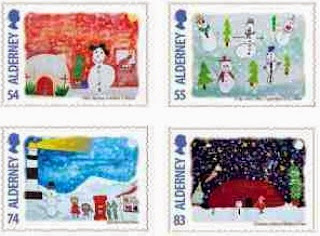 Guernsey Post's philatelic contribution to the commemoration of the beginning of the First World War will be issued on 11 November 2014 and comprises 6 stamps with the theme of "Stories From The Great War", this being the first part of an ongoing series. The stamps were designed by Charlotte Barnes and lithographed by BDT International:- 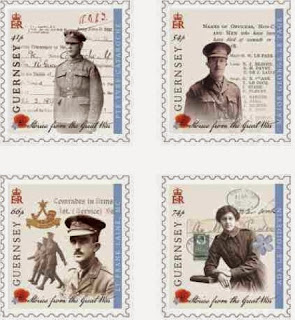 Guernsey Post has made public its proposed 2015 new issue programme and it appears to plan a grand total of 15 new sets which is clearly excessive but on par with what has happened in the British offshore islands during 2014. The subjects of the new issues will be:-
22 January 2015 - 50th anniversary of the death of Sir Winston Churchill;
28 January - Chinese New Year - Year Of The Goat;
5 February - 150th anniversary of the publication of Lewis Carroll's "Alice's Adventures In Wonderland" (inscribed "Alderney");
1 May - Flora and fauna (inscribed "Alderney");
1 May - Europa - old toys;
1 May - 175th anniversary of the issue of the "Penny Black";
1 May - 70th anniversary of the liberation from German occupation;
22 July - Forts (inscribed "Alderney");
22 July - Sepac joint issue - Culture;
22 July - 450th anniversary of the island of Sark becoming a Fief of The Crown;
9 September - Achievement of Queen Elizabeth II in becoming the longest reigning British monarch (inscribed "Alderney");
6 November - Christmas;
6 November - Christmas (inscribed "Alderney")
10 November - 70th anniversary of the Homecoming after World War II (inscribed "Alderney");
11 November - "Stories From the First World War" part 2.
I fail to feel any enthusiasm for some of the issues - there seems no reason to issue a number of the sets especially the Chinese New Year set which has no relevance to Guernsey and I know of no connection between the island of Alderney and "Alice In Wonderland" apart from the fact that the Alderney Theatre Group performed a stage adaption of the story as its Christmas pantomime in 2012!
Other proposed issues, however, are of obvious interest and relevance to Guernsey and the issues related to the World War anniversaries and The Queen's achievement of becoming the longest reigning British monarch are clearly of importance. As described in Blog 467 Royal Mail will also release a set of stamps on 6 October 2015 to commemorate the Queen becoming Britain's longest reigning monarch.
New Zealand Post will issue a miniature sheet on 15 October 2015 which includes 2 stamps and which is connected to a range of personalised stamps related to the second of The Hobbit films, "The Battle Of the Five Armies". The personalised stamps will also be available from 15 October 2015 and will enable the customer to appear on the stamps as one of the Dwarf characters which appear in the movie. A sheet of 20 stamps will cost "from just $25.90".
I note that the preposterous inscription on the stamps reads, as with some previous Hobbit issues, "Middle Earth New Zealand". Presumably when the country changes its national flag as it seems that it may soon do, it will also change its name to "Middle Earth" and be done with it:- 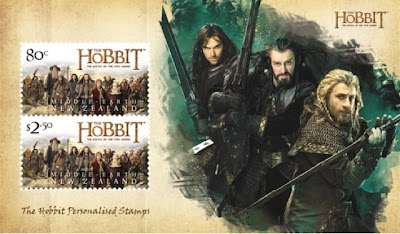